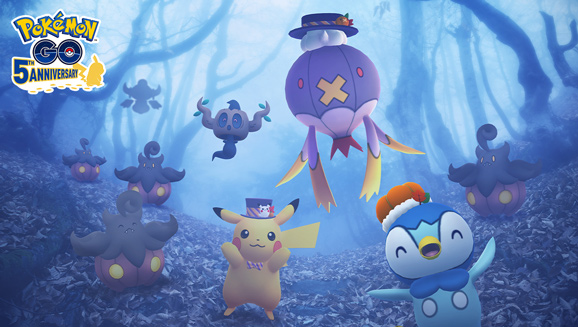 Treat yourself to a spooky Halloween experience with a Pokémon GO event that’ll allow you to expand your Pokédex and double your Candy rewards while listening to the haunting notes of Lavender Town. The Pokémon GO Halloween Mischief 2021 event runs from Friday, October 15, 2021, at 10:00 a.m. to Sunday, October 31, 2021, at 8:00 p.m. local time. This event will be divided into two parts, with plenty of featured Pokémon to catch, research to complete, and adventures to be had across both parts.

All of the mischief and mayhem will play out with the haunting sound of Lavender Town’s iconic music in the background, so don’t forget to turn the volume up during this event.

Here are some activities you can enjoy throughout the entire event:

Pokémon appearing in one-star raids will include Galarian Slowbro, Murkrow, Scraggy, Yamask, and Espurr. Three-star-raid Pokémon include Alolan Raichu, Sableye, Banette, and Halloween Mischief Drifblim. Altered Forme Giratina will also be making its ghostly presence felt in five-star raids, with a possibility of encountering a Shiny Giratina as well.

Pokémon hatching from Eggs during the event will include Spinarak, Misdreavus, Shuppet, Chingling, and Litwick. If you’re lucky, you might also hatch a Galarian Yamask or Golett.


Some delightfully ghoulish pals are introducing a fun new mechanic to the game. Phantump, Trevenant, Pumpkaboo, and Gourgeist will debut in Pokémon GO during Part 2 of the Halloween Mischief 2021 event. Kalos experts may recall that Pumpkaboo come in a variety of sizes, which serves as the inspiration for a creepy Collection Challenge that encourages you to collect Pumpkaboo both large and small. Plus, with the introduction of these Pokémon to Pokémon GO comes a brand-new size mechanic, which will allow a Pumpkaboo’s size to be reflected in its in-game appearance.

Mega Absol and Darkrai will be appearing during the Pokémon GO Halloween Mischief 2021 Special Raid Weekend. From Saturday, October 30, 2021, at 10:00 a.m. to Sunday, October 31, 2021, at 8:00 p.m. local time, Mega Absol will make its Pokémon GO debut in Mega Raids while Darkrai spreads its horrific nightmares through five-star raids.

During this second event phase, the following Pokémon will be appearing in the wild: Gastly, Murkrow, Misdreavus, Shuppet, Purrloin, Phantump, and Small Size or Average Size Pumpkaboo. If fortune favors you this Halloween season, you might encounter Haunter, Yamask, Litwick, and Large Size or Super Size Pumpkaboo.

Pokémon hatching from Eggs during this event will include Misdreavus, Shuppet, Galarian Yamask, Litwick, Golett, Phantump, and Small Size Pumpkaboo.

Get out there and make some mischief, Trainers!