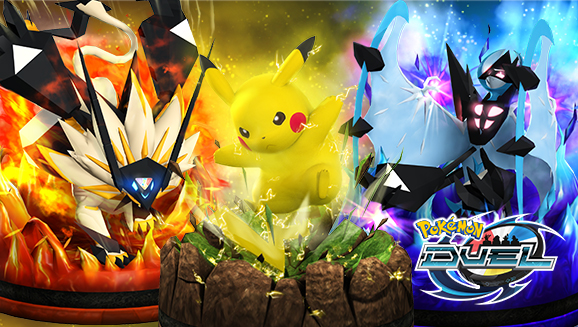 Log in to get [UX] Pikachu and check out tons of new Z-Moves, figures, and the debut of the Player Pass service.

The latest update to Pokémon Duel is its biggest yet, putting even more exciting opportunities into players' hands. This update is so big it gets its own name—the Z-Powered Update! Fittingly, one of its biggest highlights is the expansion of Z-Moves to include every Pokémon type. Some of these Z-Moves are exceptionally powerful, like Breakneck Blitz, a Normal-type Z-Move. Pokémon knocked out by the attack are excluded from the duel for seven turns before returning to the bench! In addition to type-based Z-Moves, some Pokémon are also able to use exclusive Z-Moves.

For a limited time, you can get a [UX] Pikachu figure as a log-in bonus, and it's one of the Pokémon that can use a signature Z-Move. Its electrifying Z-Move Catastropika forces all opposing Pokémon on the field to spin—those that spin White Attacks will become paralyzed! Make sure to log in before March 12, 2019 at 5:59 p.m. PST to receive [UX] Pikachu.

Plenty of new figures have also entered the fray, such as [UX] Darkrai and [EX] Absol, as well as the fearsome [UX] Necrozma. In its first battle after moving to the field, its Prism Armor Ability turns the opposing Pokémon's Gold Attacks into White Attacks. This makes the Legendary Pokémon an excellent response to the popular [UX] Mega Rayquaza and its Extreme Speed Attack. [UX] Necrozma's Purple Attack, Photon Geyser, can even remove an opponent's Ability. Look for new figures as Monthly Point rewards, in updated Time Boosters, in the Shop, and more.

The Z-Powered Update also introduces an optional service called Player Pass for players who want to get the most out of their Pokémon Duel experience. The Player Pass offers a variety of gameplay bonuses for dedicated fans, including the ability to select at least six figures from the available options to add to your collection each month. New figures will be added to the pool every month, and the number of figures you can get increases by one for each month you have the Player Pass, to a maximum of ten figures per month. Players can opt-in to the Player Pass for $16.99 per month.

Players who sign up for the Player Pass before March 12, 2019 at 5:59 p.m. PST will receive ten figures per month from the beginning of their subscription. A bonus [EX] Celebi figure will also be provided to players who subscribe within 14 days of their first login after the Z-Powered Update, while new players must subscribe within 14 days from the day they complete the tutorial. [EX] Celebi can turn back time with its Time Travel Ability, letting you redo your last turn and forcing the opponent to redo theirs.


Opportunities for All Players

As of the Z-Powered Update, Boosters are no longer available, but the new Monthly Point Rewards system makes it easy to earn items and figures just by playing Pokémon Duel. You'll accrue twenty Monthly Points for winning a League Match and four for losing, and you'll automatically earn rewards as your Monthly Points add up, such as [UX] Eevee and [EX] Kangaskhan figures. Player Pass subscribers can earn even greater Monthly Point Rewards and bonuses, including the new [UX] Dusk Mane Necrozma and [UX] Dawn Wings Necrozma figures.

Please note that all dates and times are subject to change.

Pokémon Duel is available now for iPhone and iPad in the App Store, for Android devices on Google Play, and for Kindle Fire on the Amazon Appstore. Download it and begin the epic battle today!