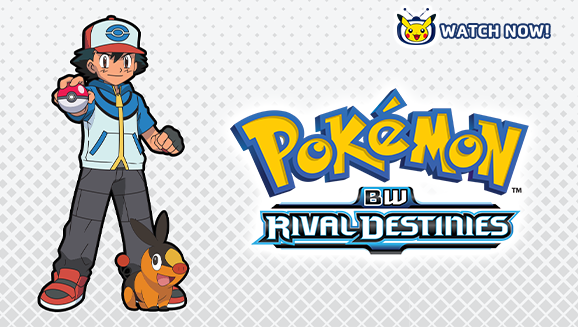 Ash encounters Legendary and Mythical Pokémon and takes on multiple tournaments as his adventures in the Unova region continue.

Ash, Pikachu, and their friends continue to explore the Unova region in Pokémon: BW Rival Destinies, which has just arrived on Pokémon TV. In this 15th season of Pokémon the Series, Ash finds himself up against the ultimate battle challenge: Alder, the Champion of Unova! His friends also take on their own trials, and of course, they encounter all sorts of incredible Pokémon they’ve never seen before—including some mysterious Legendary Pokémon. Before jumping into the full season, read up on these important events that our heroes will face, and then sit back and enjoy the show!

Pokémon: BW Rival Destinies hardly has a chance to begin before Ash, Iris, and Cilan encounter three Legendary Pokémon. Our heroes head to the Driftveil City Gym so Ash can challenge Gym Leader Clay to a battle. Before accepting the challenge, though, Clay sends Ash and friends on an errand to collect some Revival Herbs (“Stopping the Rage of Legends! Part 1”). As they search for the elusive herbs, they meet up with a guide named Lewis and his Gothorita, and all of them become wrapped up in a conflict between the Legendary Pokémon Tornadus and Thundurus. According to legend, only the powerful Landorus can calm these feuding Pokémon. With Lewis and Gothorita’s help, Landorus appears, but Team Rocket is also on the scene to cause their patented brand of trouble (“Stopping the Rage of Legends! Part 2”). Discover their villainous plot in this two-part adventure.

Throughout the previous season, Ash and friends had multiple encounters with a wild Sandile who sported a pair of sunglasses. This mischievous Pokémon would appear from time to time in hopes of defeating Pikachu in battle. Eventually, it evolved into Krokorok during a match. In this season, after exploring a site where an ancient hero supposedly met the Legendary Pokémon Zekrom, our heroes once again come face-to-face with the sunglasses-wearing Pokémon (“Explorers of the Hero’s Ruin!”). It’s looking for a rematch with Pikachu, but the conflict is set aside when Ash and friends meet a young boy named Mick who needs help dealing with a bully (“Battling the Bully!”). But once Mick’s troubles are over, how will Pikachu and Krokorok resolve their differences?


Prepare for the Clubsplosion Tournament

An exciting adventure begins when Ash and crew arrive at the Pokémon Battle Club in Ambiga Town for the Clubsplosion Tournament (“The Clubsplosion Begins!”). Some of our heroes’ rivals have also shown up to compete in this thrilling competition. Each Trainer is allowed to use only one Pokémon in the tournament, so Ash chooses Scraggy, Cilan chooses Pansage, and Iris chooses Excadrill. The three work their way up through the ranks, and Ash takes some time to do a little extra training with his rival Stephan (“Search for the Clubultimate!”). Which of our heroes progresses the furthest in the tournament? Does one of them come out on top? All will be revealed during the competition’s final matches (“Commanding the Clubsplosion Crown!”).

It turns out the Clubsplosion Tournament was just a warm-up for the Pokémon World Tournament Junior Cup, which takes place toward the end of Pokémon: BW Rival Destinies. Ash, Iris, and Cilan (as well as Ash’s former traveling companion Dawn) enter the fierce competition, and it’s not long before Iris and her new Dragonite face off against rival Georgia and her Beartic (“Jostling for the Junior Cup!”). As the Trainers make their way through the competition, the battles become even more intense, with Ash’s rival Trip proving to be a formidable foe. The eventual winner of the tournament gets the chance to battle Alder, the Champion of the Unova region (“Goodbye, Junior Cup—Hello, Adventure!”).

Shortly before the Pokémon World Tournament Junior Cup, Ash and his friends come to the aid of the Mythical Pokémon Meloetta, who was injured while escaping from Team Rocket (“All for the Love of Meloetta!”). The grateful Pokémon has secretly been following Ash as he continues his travels (“Piplup, Pansage, and the Meeting of the Times!”). Unfortunately, Team Rocket is hot on Ash’s trail, and they’re hoping to capture Meloetta for the Boss (“Expedition to Onix Island!”). After the Junior Cup, the Mythical Pokémon helps calm down some distraught Pokémon, then entertains our heroes with a song (“Unrest at the Nursery!”). But with Meloetta out in the open, Team Rocket makes their big push to capture it, leading to an adventure in an Undersea Temple, the return of some Legendary Pokémon, and a plot that threatens the entire Unova region (“Unova’s Survival Crisis!”)!

There’s a lot of action here, but there are still plenty more episodes to enjoy in Pokémon: BW Rival Destinies. Tune in to Pokémon TV to see what other adventures Ash, Pikachu, and their friends experience. Remember that you can load up the Pokémon TV mobile app and enjoy these classic episodes anywhere!