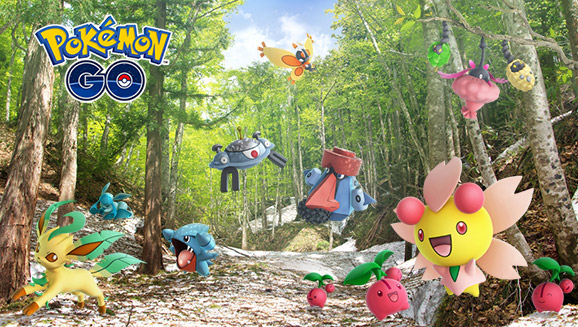 Pokémon GO players are about to discover that there's plenty of excitement in store as more Pokémon and new features have begun showing up in the game. As you encounter Pokémon in the wild or hatch Eggs, be on the lookout for more Pokémon that were originally discovered in the Sinnoh region, such as Cherubi, Gible, Hippopotas, and more.

In addition to the expanded Pokémon roster, some Pokémon can now learn the Ground-type Charged Attack Earth Power. This powerful move may lower your opponent's defense in Trainer Battles, and it's available to some of the newly introduced Pokémon, as well as to Nidoqueen, Nidoking, Aerodactyl, Camerupt, and Claydol.

New Pokémon and moves aren't the only surprises to be found in this latest update. Three new special Lure Modules are now available in the store, and they'll start showing up later this season as rewards for Special Research. These special Lure Modules attract local Pokémon as well as bonus Pokémon based on the type of lure.

When Trainers are within range and can successfully spin a Photo Disc of a PokéStop that has been activated with a special Lure Module, it will enable an Evolution for Magneton, Eevee, and Nosepass. These special Evolutions will be confirmed in the Pokémon detail screen before you choose to evolve, just in case.

With so many fun added features, there are plenty of reasons to get out and explore. Have fun, Trainers!