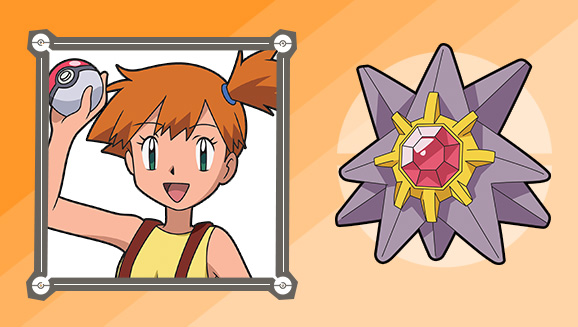 The new mobile game Pokémon Masters is sure to delight fans of the human characters in the Pokémon universe. Famous Pokémon Trainers from the past appear in the game as sync pairs with their partner Pokémon, and players can join forces with them to take on all sorts of powerful opponents.

Among the first sync pairs you'll encounter in Pokémon Masters is one of the most beloved characters of all: Cerulean City's Gym Leader, Misty, along with her Starmie. This famous gal from the Kanto region has been popping up in a lot of places recently. In addition to her prominent role in Pokémon Masters, she's also been waiting to challenge players in Pokémon: Let's Go, Pikachu! and Pokémon: Let's Go, Eevee! for Nintendo Switch. Misty has also made recent appearances in the Pokémon TCG and Pokémon the Series.

Like in our recent Trainer Spotlight dedicated to Pewter City Gym Leader Brock, we were prompted by Misty's role in Pokémon Masters to catch up with the Tomboyish Mermaid and see what she's been up to lately. 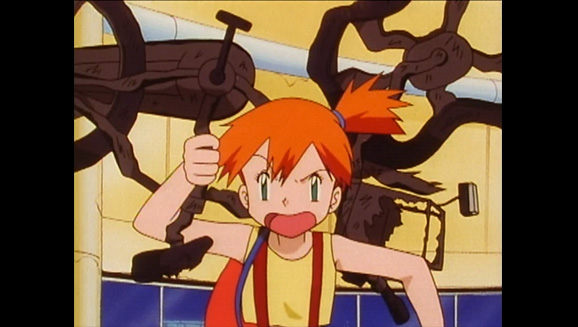 Misty shows up in the very first episode of Pokémon the Series (“Pokémon—I Choose You!”) when Ash makes a less-than-great first impression by “borrowing” her bike to escape a flock of furious Spearow, with the promise to “give it back someday!” She meets up with Ash again in the next episode (“Pokémon Emergency”), when she tracks him down to reclaim her stolen property (which—whoops—has been burned to a crisp by Pikachu's electricity). She vows to stick with Ash until he's able to pay her back. It isn't until later that Ash learns Misty's true identity as a Cerulean City Gym Leader (“The Water Flowers of Cerulean City”).

Misty eventually forgives Ash for trashing her bike, but she's no pushover—she can become frustrated when her friends act immature, and she's not shy about expressing her opinions. Her Psyduck certainly gets the occasional earful when it pops up at inopportune moments. And of course, when Brock develops yet another crush on just about any woman he meets, Misty will angrily drag him away when he won't leave the ladies alone. 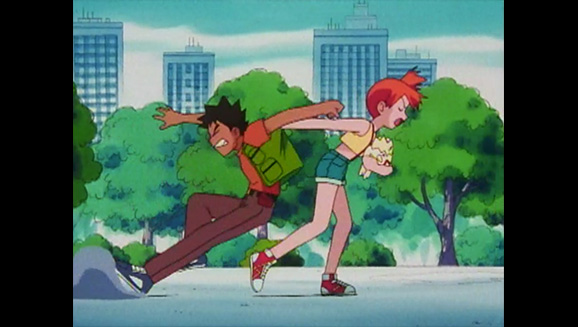 Misty will definitely let you know how she feels about Bug-type Pokémon, which really creep her out. When she finds a Pokémon she cares for, however, she becomes incredibly devoted and protective. This is especially apparent with her Togepi, who bonded with her immediately after it hatched from an Egg. She raised it until it evolved into Togetic, and then released it so it could help protect the Mirage Kingdom (“A Togepi Mirage”). 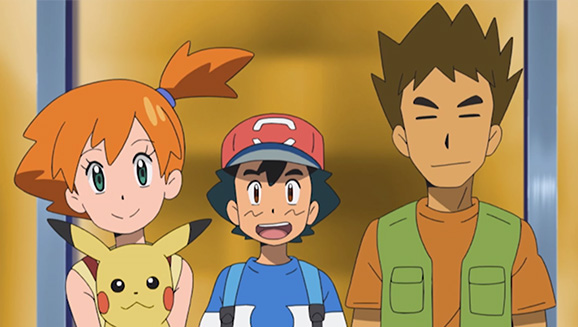 Despite Misty's close relationship with Ash, circumstances force them to go their separate ways, but they remain good friends and continue to reunite on occasion. Ash takes a break from his journey in the Alola region to return to Kanto for a brief visit home, and his friends from the Pokémon School come along for a field trip! This prompts a reunion—and a few heated Pokémon battles with Misty (“Alola, Kanto!” and “When Regions Collide!”). The travel itineraries get flipped when Misty later travels to the Alola region for a vacation. Between the shopping, some exciting Mantine Surfing, and the relaxing beaches, Misty quickly falls in love with the region (although she is put off a bit by Melemele Island's population of Bug-type Pokémon) (“Alola, Alola!” and “Heart of Fire, Heart of Stone!”). 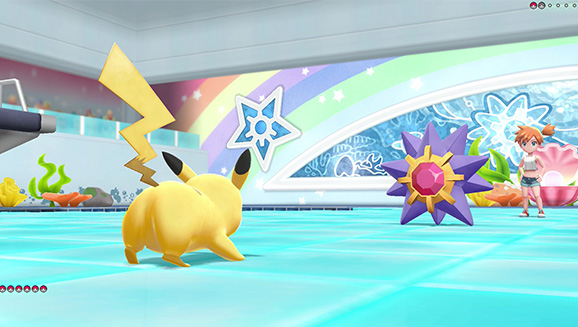 In the video games, Misty is referred to as “the Tomboyish Mermaid,” a title that suits her well. The people of Kanto know her for her exceptional skill with Water-type Pokémon and her constant training. It's not all business for Misty, though—in Pokémon Gold and Pokémon Silver, the player can interrupt Misty while she's out on a date with her boyfriend. Naturally, she does not take this well. In battle, you can count on Misty sending in her partner Starmie, so make sure you have some Grass- or Electric-type Pokémon ready to engage. 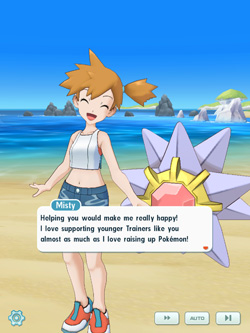 As mentioned earlier, Misty plays an important role in Pokémon Masters for iOS and Android devices. She joins up with your characters right away in their adventures and becomes a close friend. Not surprisingly, she has formed a sync pair with her longtime Pokémon partner Starmie. As a nod to Misty and Starmie's debut in the original Pokémon RPGs, her Starmie starts off with the Bubble Beam attack. Even more amusing is that the pair's sync move is dubbed “Tomboyish Mermaid Bubble Beam,” which works as a sort of double homage. Additionally, Misty's Pokémon is also able to learn the powerful attack Hydro Pump, making Misty an even more useful ally.

In what seems like a sly reference to Starmie's Natural Cure Ability, which heals status problems when the Pokémon is switched out of battle, Misty and Starmie's passive skill in Pokémon Masters will occasionally remove all status conditions from your sync pair partners after Starmie uses a move.

As such a prominent character in the world of Pokémon, Misty has been part of the Pokémon Trading Card Game since the early days. She was introduced in the Gym Heroes expansion way back in 2000, and she had her own theme deck that included cards focused on her, her Gym, and her Pokémon. 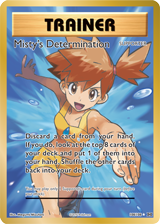 The original Misty card boosts the attacks of Misty's Pokémon by 20 damage the turn it's played (at the cost of discarding two other cards). Misty's Wrath allows the player to look at the top seven cards of their deck, put two into their hand, and discard the others. The Misty's Duel card is amusingly unique. It requires both players to engage in a game of Rock-Paper-Scissors or to flip a coin. The winner of the match (or flip) shuffles their hand into their deck and draws five new cards. In addition to these Misty-themed Trainer cards, several Pokémon in this expansion are on Misty's team.

Misty has two different cards in the Gym Challenge expansion. Misty's Wish allows the player to look at one of their Prize cards and switch it with a card in their hand—but only if the opponent agrees. (If the opponent says no, the player gets to draw a card instead.) Misty's Tears lets the player discard a card to search their deck for up to two Water Energy cards. After these early appearances, Misty took some time off before making a comeback.

Years later, Misty returned with the Misty's Determination card from the XY—BREAKpoint expansion. Here, discarding a card lets the player look at the top eight cards of their deck and put one of them into their hand. The same card reappears in XY—Evolutions with different artwork. 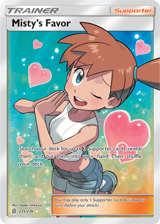 Recently, Misty has made another Pokémon TCG appearance in the Sun & Moon—Unified Minds expansion. Misty's Favor lets the player search their deck for up to three Supporter cards.

Misty's cards tend to involve manipulating the player's hand, allowing them to prepare strategies for the perfect attack. This ties in with the depiction of this Gym Leader in the video games, where she uses a combination of natural skill and intense training to prepare her Pokémon for battle.

There's no doubt that Misty is one of the most popular characters in the world of Pokémon. Given her long-running popularity, we wouldn't be surprised to see this charismatic Gym Leader make more appearances in the future. Until that time, though, please look forward to our next Trainer Spotlight! 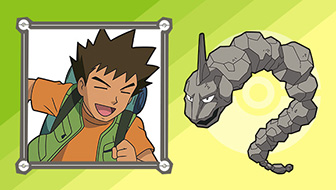