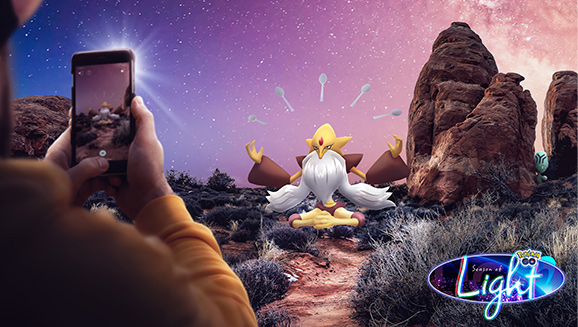 The Cerebral Pokémon Elgyem might not be as powerful as Mega Alakazam, but power isn’t everything! Trainers may be dazzled by the chance to encounter a Shiny Elgyem for the first time in Pokémon GO. Elgyem will appear more often during the event, and Trainers will be able to complete Timed Research focused on Curveball Throws to earn even more encounters with Elgyem. Keep a calm mind and aim those Poké Balls carefully!

The Mythical Pokémon Deoxys will also appear in five-star raids in all its forms: Normal Forme, Attack Forme, Defense Forme, and Speed Forme. On September 11, 2022, from 2:00 p.m. to 5:00 p.m. local time, additional bonuses will accompany Deoxys Raid Day. Deoxys in all its forms will appear more frequently in five-star raids. Trainers playing during Deoxys Raid Day can also earn up to five additional daily Raid Passes. Trainers may even encounter a Shiny Deoxys—if they’re lucky!

As always, event-themed Pokémon will appear in the wild, in raids, and from hatching Eggs. For the full list of Pokémon that will appear during Pokémon GO’s Psychic Spectacular event, check out Niantic’s blog.

We hope you have an enlightening time discovering the wonders of Psychic-type Pokémon in Pokémon GO!