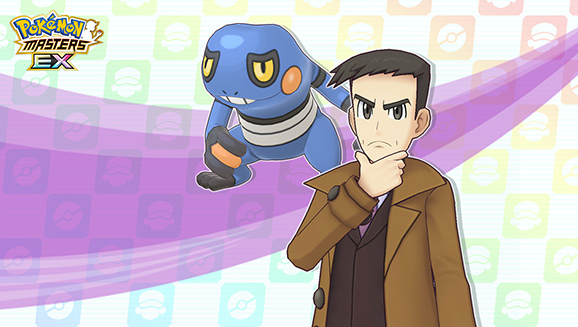 The intrepid officer has arrived on Pasio with his faithful Pokémon partner.

Be on your best behavior, everyone! The International Police officer Looker has arrived in Pokémon Masters EX alongside his Pokémon partner Croagunk. It should come as no surprise that this Poison-type Physical Strike sync pair can cause lasting damage by poisoning their opponents. Two of their attacks have a chance to inflict poison, and their passive skill Toxic Chance 2 can also leave your opponent poisoned after you pull off a successful move. If you’re up against an opponent that’s weak against Poison-type moves, note that Looker & Croagunk’s move On the Case! and passive skill Superduper Effective 9 will boost the power of supereffective moves.

Hop & Zamazenta are one of the strongest support sync pairs when it comes to raising the stats of a Physical Strike sync pair. Their Trainer move Hop to It! affects all allied sync pairs, including themselves, raising each’s Attack by two ranks and each’s Defense and critical-hit rate by one rank. This Trainer move can be used multiple times if combined with Hop to It!: MP Refresh 3, a tile on Hop & Zamazenta’s sync grid that grants a 40% chance of restoring one MP of Hop to It! when the move is successful. If this is combined with On the Case!, Looker & Croagunk can easily raise their own Attack stat by six ranks. This potent combination gets Looker & Croagunk striking hard and fast while also providing the extra defensive stats to stay on the field. Hop & Zamazenta can be obtained after completing Howling Shield of Eternity in the Legendary Adventures portion of the main story.