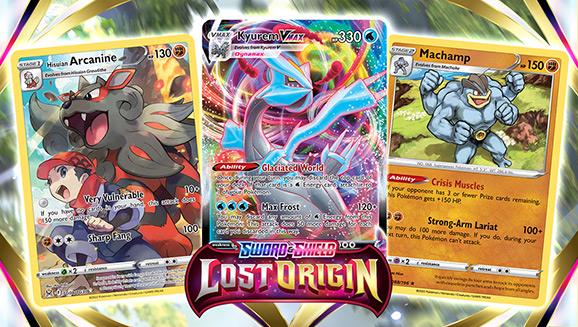 Learn about the strengths that these new and unique cards have to offer in Sword & Shield—Lost Origin.

An ominous threat looms in the upcoming Pokémon Trading Card Game: Sword & Shield—Lost Origin expansion. Your cards can now be cast into the Lost Zone, an abyss from which they cannot be recovered. Don’t worry too much, though—a clever player can use the Lost Zone to their advantage. This expansion also includes brand-new Radiant Pokémon, more Pokémon VSTAR and Pokémon V, and an enormous Pokémon VMAX. There are also 30 cards with special artwork in the Trainer Gallery subset. 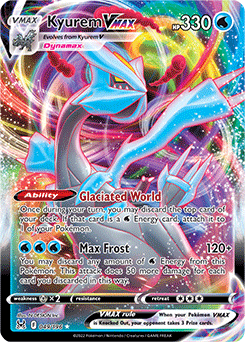 The Lost Zone is the focus of Sword & Shield—Lost Origin, but Kyurem VMAX shows that there are plenty of chilling cards in this set that don’t interact with the Lost Zone at all. Kyurem VMAX has the Glaciated World Ability, which allows you to discard the top card of your deck—and if it’s a Water Energy card, attach it to 1 of your Pokémon. That’s especially helpful with its powerful attack, Max Frost, which does 120 damage, plus 50 more for each Water Energy discarded when using the attack. You can either set up damage on your opponent’s Pokémon without discarding Energy, or snow them in with an infinitely scaling attack that can one-hit-KO any Pokémon. 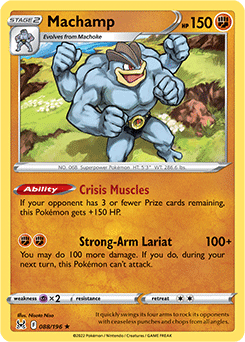 Multi-Prize Pokémon often headline the Pokémon TCG, but this Machamp gets big and beefy thanks to its Crisis Muscles Ability. When your opponent has 3 or fewer Prize cards remaining, Machamp gains 150 HP, making it nearly as big as the toughest Pokémon VMAX and bulkier than every Pokémon VSTAR. It packs a decent punch, too, with its Strong-Arm Lariat attack doing up to 200 damage. Machamp especially shines in Gym Leader Challenge, an alternative TCG format that allows only Pokémon without a Rule Box. Once your opponent reaches three Prize cards, Machamp will probably be the biggest and buffest Pokémon on the board, making it difficult for any single-Prize Pokémon to take it out. 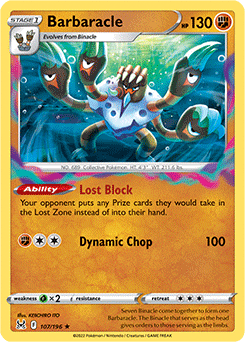 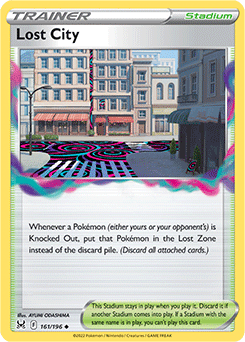 Tell your opponent’s Pokémon to get lost with the new Stadium card Lost City! Whenever a Pokémon (either yours or your opponent’s) is Knocked Out, it goes to the Lost Zone instead of the discard pile. You have to be careful not to disrupt your own strategy, but Lost City is especially effective against decks that rely on looping their Pokémon in and out of play. Regigigas, for example, relies on having Regirock, Regice, Registeel, Regieleki, and Regidrago in play to use its Ancient Wisdom Ability. If Lost City sends too many of these Pokémon to the Lost Zone, Regigigas may end up stuck without its powerful Energy acceleration—securing an easy win for the opponent. 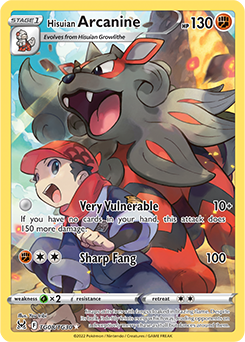 Hisuian Arcanine has the unique Very Vulnerable attack that can do a whopping 160 damage and requires no Energy—the catch is that you must have no cards in your hand to get the full damage. Hand size is important in the Pokémon Trading Card Game, and this may sound like a daunting condition—but with cards like Quick Ball, Ultra Ball, and even Cram-o-matic, there are plenty of ways to get down to zero cards. Playing your next turn with a small hand is also concerning, but Radiant Venusaur allows you to fill your hand up to four cards with its Sunny Bloom Ability after you use the attack, making it more likely that you’ll put the pieces together for another full-damage strike!

These are just some of the over 190 cards that can be found in the upcoming Pokémon TCG: Sword & Shield—Lost Origin expansion. You’ll encounter plenty more incredible cards when the expansion releases on September 9, 2022.