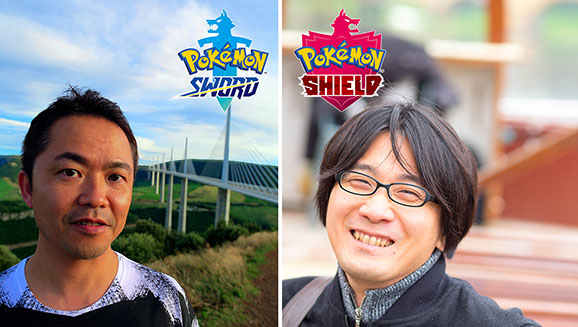 We discuss the creation of the new Pokémon RPG adventure with the games’ director and producer.

With the imminent release of Pokémon Sword and Pokémon Shield for Nintendo Switch, excitement is growing as fans prepare to head out into the Galar region and experience the latest Pokémon RPG. In case you weren't hyped enough about these games, check out our chat with two of the minds behind Pokémon Sword and Pokémon Shield, Game Director Shigeru Ohmori and Producer Junichi Masuda of GAME FREAK, inc. They share some thoughts about the development of these highly anticipated titles. 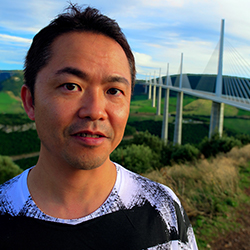 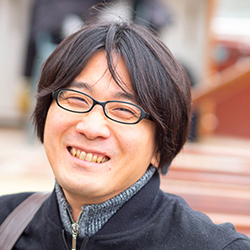 Pokemon.com: These games represent a bit of a shift for the series, as there are now many people trying to become Champion and not just the main character. How did this affect the direction of the story and scripting for the games?

Shigeru Ohmori: In the UK, which serves as the inspiration for the Galar region, sports like soccer and rugby are very popular and players compete to become the very best and lead their team to winning championships. This kind of sports journey is also a very popular genre in Japanese manga and anime, and we're taking a similar approach with the story for these games. Each of your rivals has their own personal goals they want to achieve as they compete for the title of Champion. How you and your rivals interact and how you all grow through your journey and Pokémon battles, winning and losing against each other, will be an interesting aspect of the story.

Pokemon.com: From what we've seen of the Wild Area, a free-moving camera works really well in a Pokémon RPG. Would you ever want to create a fully open-world Pokémon game?

Mr. Ohmori: We always want to come up with new surprises for our players with each new Pokémon game. This is our first time introducing free camera movement in the series, so we're excited to see how our players will respond to it once they get their hands on the games. We'll think about what we want to do in the future based on those reactions.

Pokemon.com: Pokémon Sword and Pokémon Shield introduce several interesting ways to train Pokémon outside of battle, such as Pokémon Camp, Poké Jobs, and new items like mints. Why did you feel that was important?

Mr. Ohmori: We felt that it is important for all players who spend a lot of time with the games, even if they don't focus on battling, to be able to finish the main story. There are lots of different ways for players to have fun playing with their Pokémon outside of battles, and Pokémon Camp is one of them. We felt it wouldn't make sense for players to spend a lot of time engaging in those gameplay features only to end up under-leveled and unable to progress in the story, so we decided to give Exp.Points for playing at camps. Our thinking was the same with the other new ways to train that we introduced in these games.

Pokemon.com: What motivated the change to leave the Exp. Share on permanently for the first time in the series?

Mr. Ohmori: I spent a lot of time discussing this with our battle design team. We came to the realization that the vast majority of players played the games with the Exp. Share left on at all times. When thinking of why players would want to turn it off, we thought it would primarily be to give Exp. Points to only one of the Pokémon in your party. We felt the same result could be achieved by players simply limiting the number of Pokémon in their party to one. That would be a more intuitive way to limit Exp. Point gains for most players.

Pokemon.com: You mentioned recently that you expect some of the new battling features to be quite challenging. Was providing more challenges for expert-level players one of your original goals for these games?

Mr. Ohmori: We decided to implement cooperative battles for the first time in our Pokémon games. Players can team up with up three other players to take on powerful opponents that they would not be able to defeat alone. We believe that these new battles will require a different kind of communication between players than before, and I'm really looking forward to seeing players take on the challenge with their friends.

Pokemon.com: How did you go about balancing the impact of Dynamax as compared to previous boosts, such as Mega Evolution and Z-Crystals?

Mr. Ohmori: We always look to surprise our players with new ways to play in every Pokémon game we create. This time, we came up with the idea of Dynamax, which can be used at any time but only once during a single battle. This means that any turn becomes an opportunity to turn the tides of battle, which makes for a very thrilling play experience. Since Pokémon can be given any held item that the player likes and still use Dynamax, we think a lot of new strategies will be born through the various combinations that are possible. 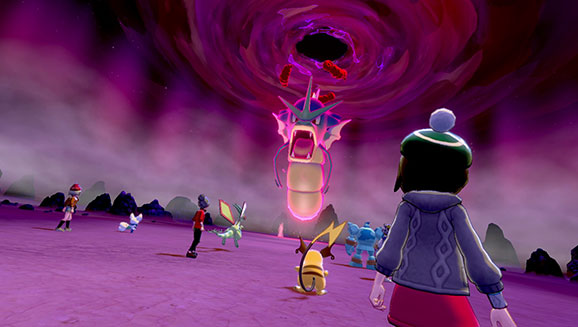 Pokemon.com: Max Raid Battles encourage multiple Trainers to battle against a single opponent. What were the challenges in rebalancing battles for this kind of cooperative play?

Mr. Ohmori: There are all sorts of Pokémon players, from the casual to the very hard-core, which made it very difficult to get the balance right for this new feature, but we believe we have created something that can be enjoyed by everyone. For example, any attack can chip away at the opponent's mysterious barrier, regardless of the attack's power. Also, even if your Pokémon is knocked out, you can cheer on your teammates to trigger a variety of beneficial effects.

Pokemon.com: Are you able to anticipate which Pokémon and team combinations will be popular in competitions? Is that something you think about when developing the games?

Mr. Ohmori: When the team works on balancing the battles, they try to foresee which Pokémon will likely see a lot of use in battle and work on balancing the games accordingly. However, there are many instances where players come up with innovative strategies that we could not predict. I think that is one of the things that makes Pokémon so interesting, and I'm excited to see which Pokémon become popular in battle after the games are released.


What Makes a Pokémon RPG?

Pokemon.com: How do you find the right balance between maintaining the identity of what it means to be a core Pokémon RPG and introducing new features? Do you ever come up with new features or mechanics that you decide to not include because they don't fit the feel of a Pokémon RPG?

Junichi Masuda: Pokémon are mysterious creatures—they are our friends, and they are thought to have power that surpasses humans. We make our decisions about the games with those elements in mind. For example, one important decision might be whether or not we should make a certain aspect more convenient in terms of gameplay or prioritize making a Pokémon feel more like a living creature. Another important core aspect of the Pokémon games is that while you may first encounter a Pokémon as an enemy in battle, that same Pokémon can become your ally if it joins your team.

Pokemon.com: After you introduce a new feature or mechanic in a Pokémon RPG, how do you determine whether it will be brought forward into the next games?

Mr. Masuda: We always take player feedback into consideration. We also consider what is possible with the latest evolutions in hardware as well as how people's interests change over time. When coming up with new features and systems, we also consider how well they will fit in with the existing feature set.

Pokemon.com: After the Alola region introduced trials and essentially eliminated Gyms, Pokémon Sword and Pokémon Shield return to an eight-Gym story path similar to previous core RPGs. What was behind the decision to return to that more familiar structure?

Mr. Ohmori: I believed that for the first all-new generation of Pokémon games on Nintendo Switch, players would want a traditional Pokémon RPG most of all. That's what led to the decision to really focus on the traditional Gym Challenge-type journey and explore the concept even more by adding in elements of sports and expressing that as part of the setting of the games. However, depending on which version you pick up, some of the Gyms you get to challenge will be different, so I hope players will look forward to trying them all! 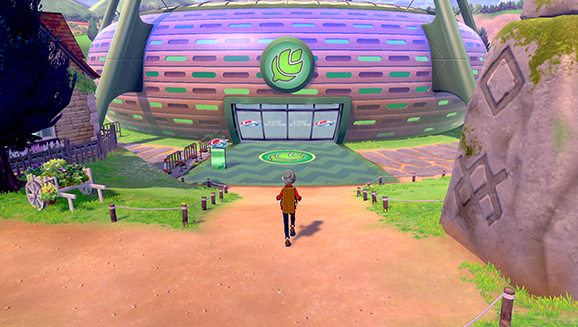 Pokemon.com: What is the process for creating a new Pokémon? For instance, do you come up with the design first and then look at that to get inspiration for its type and skills? Or do you come up with a concept necessary for gameplay and design a Pokémon to fulfill it?

Mr. Ohmori: There is no single process for coming up with new Pokémon designs, but instead there are lots of different approaches, which we believe leads to the wide variety of Pokémon designs. For example, sometimes a designer will get an idea from the real-life region that the in-game region is based on. Other times, one of our game system designers makes a request for a certain type of Pokémon to better balance the battle system, which leads to an all-new Pokémon design. The initial idea for a Pokémon can come from anyone in the company, regardless of their job title, including those who aren't in game development positions.

Pokemon.com: How did you decide which Pokémon would receive Galar regional variants and new Evolutions?

Mr. Ohmori: The Galar region is based on the United Kingdom. We started by researching what kind of animals and wildlife exist in the UK and what kind of legends are told in the region. We then came up with ideas based on what we learned. For example, Zigzagoon was originally based on a badger but was more inspired by the kind of badgers you would find in Japan, which are brown in color. Badgers in the UK have white and black colors on their fur, which gave us the idea for Galarian Zigzagoon's design.

Many thanks to both Mr. Ohmori and Mr. Masuda for taking the time to talk with us about the development of Pokémon Sword and Pokémon Shield. Now that we've learned more, we can't wait to see what they and the other creators at GAME FREAK have in store for us when the games launch on November 15! For more information about these games, be sure to check out the official site.