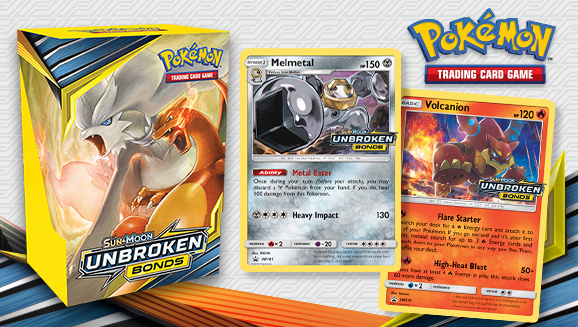 Pokémon TCG Build & Battle Boxes are an awesome way to have quick battles using cards from the new Sun & Moon—Unbroken Bonds expansion. Each Build & Battle Box contains a 23-card Evolution pack, which includes an exclusive foil promo card and is designed to give you a strong foundation for building a new deck. Each box also includes four 10-card booster packs from Sun & Moon—Unbroken Bonds. Try to include Pokémon of types that have a lot of cards in your pool, and finish up using your Trainer and Energy cards. If you're short on Energy cards, look for the Pokémon TCG: Basic Energy Box where Pokémon TCG products are sold—it contains 450 assorted basic Energy cards, which should be more than enough to energize all of your group's decks. With a variety of Evolution packs and four booster packs, you'll get to come up with a creative new deck each time you open a Build & Battle Box.

Take a look at the four promo cards available in Sun & Moon—Unbroken Bonds Build & Battle Boxes, and get some tips to make the most of the one you receive. 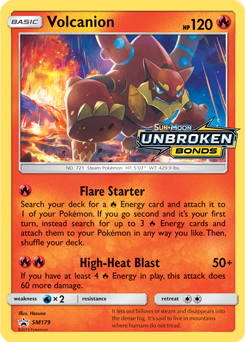 It can often be tough to get Energy into play quickly in this format, but the Mythical Pokémon Volcanion is perfect for igniting Fire Energy-based strategies. Its first attack won't do any damage, but it lets you search your deck for a Fire Energy card and attach it to 1 of your Pokémon. With some luck, you can get an even more blazing start—if you go second and use Flare Starter on your first turn, you can search for 3 Fire Energy cards and attach them to your Pokémon however you like. That'll be great for getting Volcanion's High-Heat Blast attack powered up. It ordinarily does 50 damage, but it will dish out 60 more if you have at least 4 Fire Energy in play.

While most players benefit from going first at the beginning of a game, it's worth going second if you have this powerful Pokémon. But keep in mind that to get the full benefit of Flare Starter, you'll need to make Volcanion your Active Pokémon and attach a Fire Energy card to it on your first turn. Consider including Basic Pokémon with no Retreat Cost in your deck to make it easier for Volcanion to become your Active Pokémon even if it isn't one of the first seven cards you draw. Flare Starter is so useful, you may want to go second even if you don't have Volcanion in your deck—just in case your opponent does! 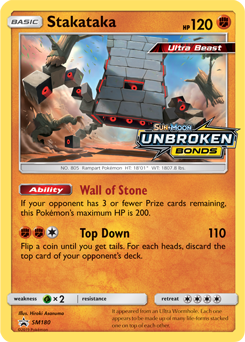 The Ultra Beast Stakataka looks a bit like a brick fortress, and accordingly, it might be tough to break through decks that feature it in Build & Battle matches. The Wall of Stone Ability increases Stakataka's already-respectable 120 HP to a mighty 200 when your opponent has 3 or fewer Prize cards remaining, and since players start with only four Prize cards, this Ability will probably be in effect more often than not. Stakataka's Top Down attack is a little expensive at a cost of 2 Fighting Energy and 1 Colorless Energy, but it does a reliable 110 damage and potentially lets you discard some cards from your opponent's deck.

On top of its Ability not kicking in until your opponent has taken a Prize card, Stakataka has a massive Retreat Cost and requires a lot of Energy to attack. Try to start the game with a different Pokémon and bring Stakataka into play after you've had time to power it up. Be sure to include plenty of other Basic Pokémon in your deck to reduce the odds of Stakataka being the only Basic Pokémon in your opening hand. And don't forget about Top Down's extra effect—most players will only have one or two copies of key cards in their Build & Battle decks, and you might be able to win longer matches by depleting your opponent's deck. 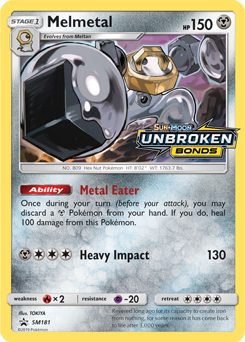 Melmetal has quickly risen in popularity, and with its Metal Eater Ability, it seems this Mythical Pokémon wants to extend its time in the spotlight. Once during your turn, you can use this Ability to discard a Metal-type Pokémon from your hand, then heal a whopping 100 damage from Melmetal. It's difficult to consistently do 100 damage per turn in this format, and Melmetal has 150 HP to start with, so the Hex Nut Pokémon will be tough to topple! The trade-off for this powerful Ability is Melmetal's cumbersome Heavy Impact attack, which requires 4 Energy to use and does 130 damage with no added effects.

Because your goal is to use Metal Eater as often as possible, and because Heavy Impact isn't cheap, you'll want to add plenty of Metal-type Pokémon and a decent number of Energy cards to your Build & Battle deck. It's easy to imagine a match involving Melmetal stalling out, so keep an eye on the size of your deck and try to avoid running out of cards before the game ends. 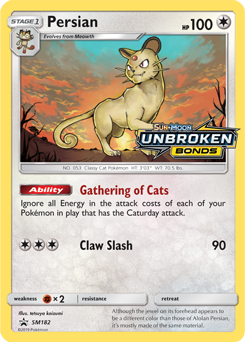 The Classy Cat Pokémon is known for being a bit snobbish, so it's no surprise that this iteration of Persian is built around having other Pokémon do the hard work. Its Gathering of Cats Ability lets you ignore the Energy in the attack costs of each of your Pokémon in play that has the Caturday attack—an attack that Persian itself doesn't have. Instead of being your deck's star attacker, Persian will act as a ringleader, lurking on the Bench while you send wave after wave of Caturday-loving Pokémon into battle to take advantage of its Ability.

Most of the Pokémon that know Caturday have lower HP and weaker attacks, so even though you won't need Energy to attack, you'll want to include enough Energy cards in your deck to ensure the Pokémon can retreat to your Bench before they're Knocked Out. Don't forget that you can also attack with Persian itself, but be warned—Claw Slash only does 90 damage for 3 Energy, and Persian's 100 HP isn't much to write home about on a Stage 1 Pokémon.

Each Build & Battle Box is a little different, so you can add your own creative twist. Have some quick and fun battles using cards from the new Sun & Moon—Unbroken Bonds expansion today!