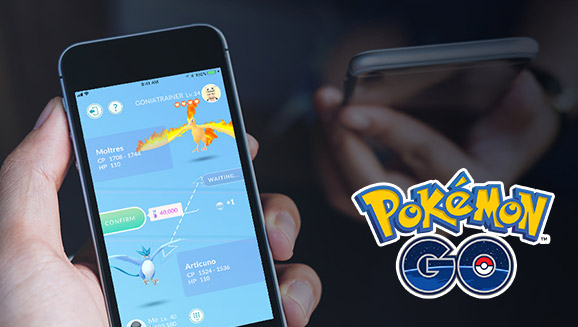 An impressive new update to Pokémon GO allows you to make friends, send Gifts, and even trade Pokémon!

Get ready, Trainers! A big update has come to Pokémon GO, and it will change the way you play the game! The friends feature has gone live, allowing you to connect with your real-life friends and interact with them in a variety of exciting ways.

To become friends with another Trainer in Pokémon GO, simply enter their Trainer Code in your game. Trainer Codes are unique ID numbers given to each player, and once you enter a friend’s code, they will be sent a Friend Request. If they accept it, you will become in-game friends, and you’ll see them in your Friend List. Note that the Pokémon GO friends feature will not be active at launch for accounts registered to players who have identified themselves as under 13 years of age.

One way that you’ll be able to play with your friends in Pokémon GO is by giving Gifts. When you spin a Photo Disc at a PokéStop or Gym, you have a chance of collecting a special Gift. Although you can’t open these Gifts yourself, you can send them to someone on your Friend List. The Gifts contain a variety of helpful items and come with a postcard showing where the Gift was collected.

Gifts can also contain a special surprise: a special 7 km Egg that, when hatched, reveals an Alola form of a Pokémon originally discovered in the Kanto region!

There’s another way to build your Friendship level, and that’s by trading Pokémon! If you are near a friend and have a Trainer level of 10 or higher, you can trade Pokémon with them. Completing a trade earns a bonus Candy for the Pokémon you traded away, and that bonus can increase if the Pokémon the two of you trade were caught in locations far apart from each other.

All trades are powered by Stardust, and some trades require more Stardust than others. As your Friendship level with the friend you’re trading with increases, you’ll find that trades can be completed with much less Stardust.

Certain Pokémon, such as Legendary Pokémon, Shiny Pokémon, or Pokémon that are not currently in your Pokédex, require a Special Trade to complete. These Special Trades can only occur once per day with a Great Friend or Best Friend, and often require a lot of Stardust to complete.

With so many new ways to connect with your friends, you’ll find that Pokémon GO has become even more exciting. Get out there and continue exploring, and make sure to swap Trainer Codes with other Trainers you meet during your journeys!