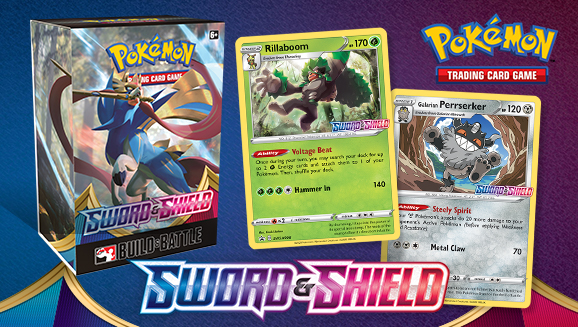 Putting together a Pokémon TCG game night has never been easier.

Pokémon TCG: Build & Battle Boxes let you clash with friends anytime you want with cards from the new Sword & Shield expansion. Each Build & Battle Box contains a 23-card Evolution pack, which includes an exclusive foil promo card and is designed to give you a solid foundation for building a new deck. Each box also includes four 10-card booster packs from the Sword & Shield expansion. Try to include Pokémon of types that have a lot of cards in your pool, and finish up using your Trainer and Energy cards.

With a variety of Evolution packs and four booster packs, you'll get to come up with a creative new deck each time you open a Build & Battle Box. These boxes are designed to be played using the Prerelease tournament format, where each player builds a 40-card deck and sets aside four Prize cards at the start of the game. All the rest of the rules are the same. But you can use them to create standard 60-card decks, too.

Take a look at the four promo cards available in Sword & Shield Build & Battle Boxes, and get some tips to make the most of the one you receive. 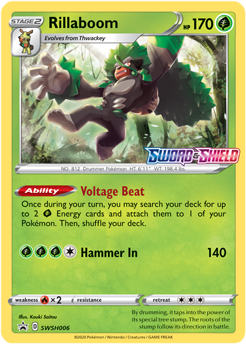 Sound off with the Grass-type Rillaboom, the final Evolution of Grookey. Its Voltage Beat Ability is super useful no matter the tournament format, allowing you to quickly get lots of Energy onto your Pokémon by grabbing 2 Grass Energy cards from your deck and attaching them to 1 of your Pokémon. Rillaboom will happily take that Energy for itself so it can power up its hard-hitting Hammer In attack. You're less likely to come across super-powerful Pokémon V in the Prerelease tournament format, so 140 damage is likely to be enough to Knock Out a lot of foes in one hit. 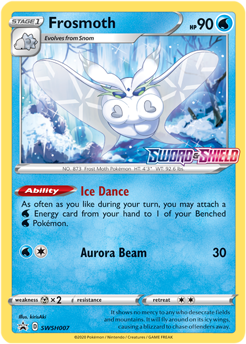 Like Rillaboom, the chilly Frosmoth helps keep your Pokémon full of Energy with its Ice Dance Ability. It lets you attach a Water Energy card from your hand to your Benched Pokémon—and keep doing that as often as you like during your turn, powering them up quickly so they're ready to attack. Frosmoth is a Stage 1 Pokémon, meaning it's even easier for it to show off its moves. And remember, it doesn't have to be Active to use this Ability; Frosmoth can make an impact even when it's out of the spotlight. 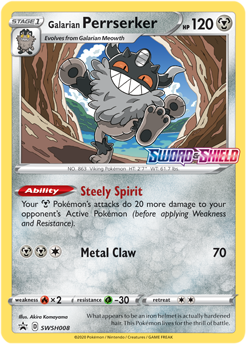 The Meowth of the Galar region take on a hairy new look and evolve in a new direction—Galarian Perrserker! This Pokémon sharpens the attacks of any of your Metal-type Pokémon (including itself) by making their attacks do 20 more damage. In the Prerelease tournament format, every little bit helps, and a couple of these Pokémon on your Bench can make a massive difference in battle. At 120 HP, Galarian Perrserker is rather durable, too, making it potentially effective in the Active Spot and attacking with Metal Claw for a boosted 90 damage. 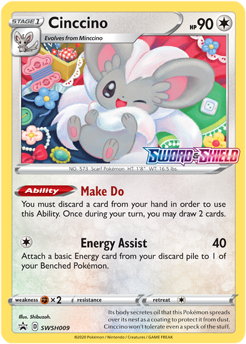 The only Pokémon from this lineup who wasn't discovered in the Galar region, Cinccino has some useful skills to contribute to your deck. Its Make Do Ability lets you turn over your hand by discarding a card to draw two more. Remember that you have only 40 cards in a Prerelease format deck, so make sure you don't draw yourself out of cards. Speed up your Energy attachment by discarding an Energy with the Ability, then getting it onto a Benched Pokémon with Cinccino's Energy Assist attack—which also does 40 damage.


Each Build & Battle Box is a little different, so you can add your own creative twist. Have some quick and fun battles using cards from the new Sword & Shield expansion today!