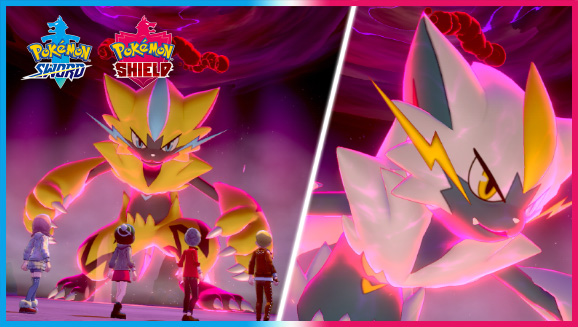 If one million Trainers defeat Zeraora in a Max Raid Battle, players can receive a special Pokémon along with items that will be useful in The Isle of Armor.

From Wednesday, June 17, 2020, at 8:00 a.m. PDT until Sunday, June 28, 2020, at 4:59 p.m. PDT, Zeraora will appear in Max Raid Battles, so gather your friends as you attempt to take down this Mythical Pokémon. Zeraora has the potential to appear in three-star Max Raid Battles or higher, and in five-star Max Raid Battles, there's a chance that you'll encounter an especially powerful Shiny Zeraora. You won't be able to catch Zeraora after it's defeated, but if at least one million Trainers manage to defeat Zeraora during this special event, a Shiny Zeraora will be available to everyone in Pokémon HOME.

In addition to Shiny Zeraora, every player who takes part in these Max Raid Battles will receive a piece of Armorite Ore for every hundred thousand Trainers that defeat Zeraora after the first million is reached (up to a maximum of 10 pieces). Armorite Ore can be used in the dojo on the Isle of Armor to have your Pokémon learn moves.

If the target numbers are reached, you'll be able to claim your Shiny Zeraora and Armorite Ore via the Mystery Gifts menu in the mobile device version of Pokémon HOME from Monday, June 29, 2020, at 5:00 p.m. PDT until Monday, July 6, 2020, at 4:59 p.m. PDT. Note that you don't have to have the Expansion Pass to encounter or receive Zeraora. In order to claim these gifts, you must also meet the following condition:

Note: Linking with Pokémon Sword and Pokémon Shield is a feature available only in the Nintendo Switch version of Pokémon HOME. For more details, please visit the Pokémon HOME section of the Pokémon Support website.

Assemble your best team to battle this Electric-type Mythical Pokémon, and help players from all over the world reach one million victories! And be sure to check out The Isle of Armor, the first part of the Pokémon Sword Expansion Pass and the Pokémon Shield Expansion Pass, available now!