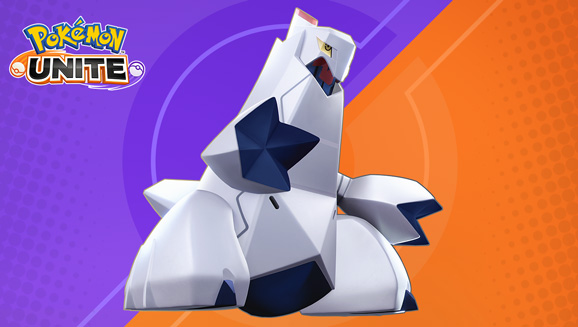 Add a Ranged Attacker to your team with a powerhouse of a Pokémon that’s ready throw its weight around.

Spin out the competition in Pokémon UNITE with Duraludon, now available to join your team. This Ranged Attacker is ready to leverage light, throw claws, and rupture the very earth to claim victory. Duraludon’s basic attack is a fierce blast of light fired from its mouth, dealing damage to opposing Pokémon it hits. This attack becomes boosted with every third attack, shooting out a long beam that deals substantial damage to all opposing Pokémon it hits. Duraludon’s Ability, Heavy Metal, prevents it from being thrown or shoved once, then goes on cooldown after it’s triggered.

At Lv. 1 and Lv. 2, Duraludon can learn Laser Focus and Metal Claw.

Metal Claw has Duraludon strike with its sharp claws, dealing damage to opposing Pokémon and decreasing their movement speed for a short time. After Duraludon uses Metal Claw, its next basic attack becomes boosted.

At Lv. 5, Laser Focus can be upgraded into one of two moves: Flash Cannon or Dragon Pulse.

At Lv. 7, Metal Claw can also be upgraded into one of two moves: Dragon Tail or Stealth Rock.

Stealth Rock has Duraludon create a field of levitating stones by hurling a stone at a designated area. The field deals damage over time to opposing Pokémon in the area of effect and decreases their movement speed for a short time. If the thrown stone hits an opposing Pokémon before reaching the designated area, the area of effect will instead be centered on where the stone hit the Pokémon. If an opposing Pokémon takes damage from Stealth Rock a certain number of times, that Pokémon will be unable to move for a short time. After Duraludon uses Stealth Rock, its next basic attack becomes boosted. A maximum of two uses can be kept in reserve for Stealth Rock. When Stealth Rock is upgraded, the maximum number of uses that can be kept in reserve increases.

Duraludon is ready to wreak ruin upon the competition. Spin over to the Unite Battle Committee shop to get Duraludon’s Unite license now. For more details, visit the Pokémon UNITE official site.