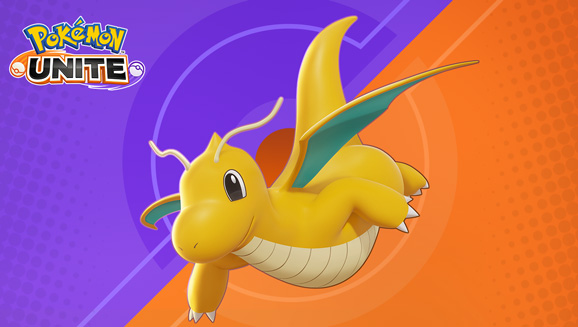 Add a Melee All-Rounder to your UNITE team with a draconic powerhouse leveraging the power of fire, water, electricity, and dance in its attacks.

Rampage through the competition in Pokémon UNITE with Dragonite, now available to join your team. This Pokémon is a Melee All-Rounder, and it’s ready to unleash twisters, comets, fire, water, and electricity on the competition. Dragonite begins each match as Dratini, but it will evolve into Dragonair at Lv. 5 and Dragonite at Lv. 8.

The basic attacks for all three Pokémon—Dratini, Dragonair, and Dragonite—are boosted with every third attack, and they reduce the cooldown period for the Pokémon’s other moves. In addition, the basic attacks have certain effects that differ as the Pokémon evolves in battle.

Dratini’s boosted basic attack blasts water in front of Dratini. This water attack deals damage to opposing Pokémon it hits and has the additional benefit of restoring Dratini’s HP when it hits.

Finally, Dragonite’s boosted attack adds a little heat to the rotation—it alternates between a water attack, an electric attack, and a fire attack (in that order) with every use. If the water or electric attacks hit, they trigger the same additional effects as Dragonair’s boosted basic attacks. If the fire attack hits, it deals additional damage to the opposing Pokémon.

Dratini and Dragonair’s Marvel Scale Ability increases their Defense when they are afflicted with a status condition. Then, when Dragonair evolves into Dragonite, the Ability switches to Multiscale, which reduces the damage Dragonite receives for a short time. The Ability goes on cooldown after being triggered.

At Lv. 1 and Lv. 3, Dratini can learn Twister and Dragon Breath. Twister creates a twister and releases it in a designated direction, dealing damage to any opposing Pokémon it hits and reducing their movement speed for a short time. Dragon Breath has Dratini exhale a mighty gust in a designated direction. If the move hits an opposing Pokémon, Dratini’s next basic attack becomes a boosted attack.

At Lv. 8, Dragon Breath can be upgraded into one of two moves. Hyper Beam has Dragonite aim at a designated opposing Pokémon, charge up power, and then unleash a beam of light that sweeps up the ground in a straight line. In addition to the beam’s base damage, Hyper Beam also deals additional damage to opposing Pokémon it hits equal to a set percentage of their max HP. Dragonite is left unable to act for a short time after using Hyper Beam. When upgraded, Hyper Beam reduces the damage Dragonite receives while using it, including when charging up power.

Outrage has Dragonite start rampaging, stomping the ground and dealing damage to opposing Pokémon in the area of effect. Outrage also triggers the additional effect of the most recently used boosted basic attack once again. During the rampage, all of Dragonite’s basic attacks become special melee boosted attacks with increased attack speed. When the rampage ends, Dragonite is left unable to act for a short time. Outrage can be upgraded to reduce the duration of hindrance effects inflicted on Dragonite when it is rampaging.

Have a maximum impact with Dragonite’s Unite Move, Draco Impact, which it learns at Lv. 9. Draco Impact has Dragonite fly high into the air before crashing down with several comets on a designated area, dealing damage to opposing Pokémon in the area of effect and throwing them. The farther Dragonite flies, the more the Unite Move gauge is consumed. While Draco Impact is being used, Dragonite become immune to hindrances.

Dragonite is ready to rampage through the competition. Fly over to the Unite Battle Committee shop to get Dragonite’s Unite license now.