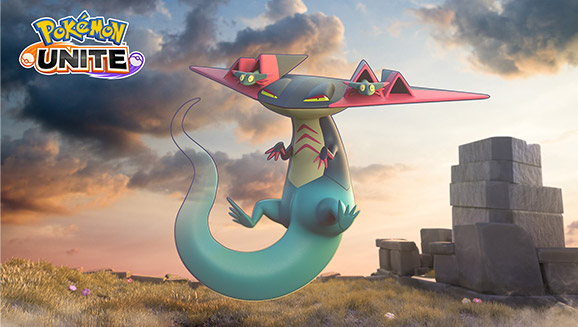 Infiltrate your opponent’s defenses with this stealthy Pokémon from the Galar region.

Stealth and surprise your opponents with Dragapult in Pokémon UNITE! This deft Pokémon from the Galar region is powerful on its own, but it’s even stronger with the aid of Dreepy inside its horns. Look forward to starting the match as Dreepy before evolving and launching a couple Dreepy yourself. You can obtain Dragapult for 14,000 Aeos coins or 575 Aeos gems at the Unite Battle Committee shop. Dragapult will only be obtainable with Aeos gems for the first seven days of its release.

Read on to learn more about everything Dragapult has to offer in Pokémon UNITE’s latest update—and to pick up some tips before jetting off to battle on Aeos Island.

Dreepy lets out a sound blast in a forward direction. The shout explodes when it hits an opposing Pokémon or after traveling a set distance, dealing damage to opposing Pokémon in the area of effect and decreasing their movement speed for a short time.

Dreepy moves quickly in the designated direction, increasing its basic attack speed for a short time.

Dragapult is a tricky Ranged Attacker that takes advantage of unique movement options and high damage from boosted attacks. With its powerful boosted attacks that deal extra area-of-effect damage, Dragapult is adept at quickly defeating wild Pokémon and cleaning up team fights. A moveset featuring Phantom Force and Shadow Ball is especially strong when focusing on boosted attacks as the primary source of damage.

Whether Urshifu chooses to master Single Strike Style or Rapid Strike Style, Dragapult has a clear advantage thanks to its range and stealthy trickery. As long as Dragapult plays cautiously and keeps movement options like Dragon Dance or Shadow Ball in reserve, it’s unlikely that strong Melee All-Rounders like Urshifu can sufficiently threaten it. Urshifu’s Surging Strikes and Throat Chop are great options for trying to close the gap against Dragapult, but they likely aren’t enough without coordinating hindrances with other teammates.

Dragapult does high damage over time with boosted basic attacks, Shadow Ball, and Phantom Force, but the Pokémon runs into trouble against Speedsters that quickly deal high amounts of damage. Zoroark’s Night Slash, Feint Attack, and Shadow Claw are all strong ways for Zoroark to quickly close the gap against Dragapult and take advantage of its lower HP pool. Players using Dragapult should wait for Zoroark’s moves to go on cooldown before getting comfortable in a team fight.