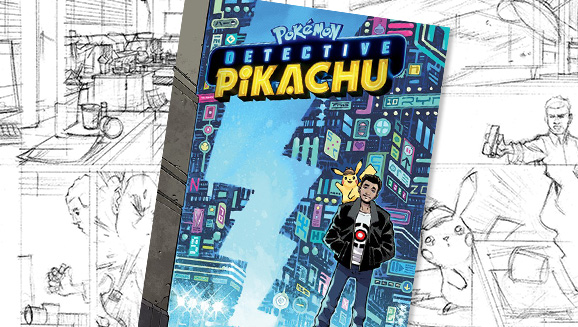 Creators of the POKÉMON Detective Pikachu Graphic Novel Speak Out

Read our interview with the creators of the graphic novel adaptation of the POKÉMON Detective Pikachu movie.

We had the opportunity to chat with some of the creators of this comic adaptation. Brian Buccellato (writer), Jann Jones (manager of brand development and publishing operations at Legendary Comics), and Nelson Dániel (artist) were kind enough to tell us more about the creation of this graphic novel and what it's like to be a part of the world of Pokémon.

They were also kind enough to share some of Dániel's incredible artwork from the graphic novel at various stages of development. Check out the bottom of the page for a behind-the-scenes look at what goes into the creation of these illustrations! 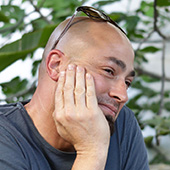 Pokemon.com: At what point during the creation of the film did you start working on the graphic novel adaptation?

Brian Buccellato: The film was already shot, and they were in postproduction when I came on board. We got to see an earlier cut of the film, which really helped me get the tone and character voices down.

Pokemon.com: Did you have any interaction with the movie writers or any other creative team from the movie?

Buccellato: My main contacts through the process were the Legendary Comics team (Jones and Senior Vice President Robert Napton), but we did have the opportunity to speak with the producers, who gave us their full support and answered whatever questions I had about the material.

Pokemon.com: How closely does the graphic novel adaptation stick to the movie's script?

Buccellato: We did our best to be faithful to the source material. Sometimes scenes and elements have to be combined or cut for pacing and space…but we gave our best effort to have the comic reflect the film. 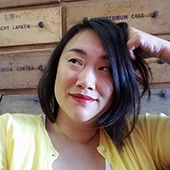 Jann Jones: We are really lucky to have the filmmakers in the same building as the editorial team, so we have been able to keep the graphic novel adaptation and the script closely aligned.

Pokemon.com: What's the process for collaborating with the comic's artist? How closely did you work together?

Buccellato: Honestly, not very close. I wrote the full script, and the Legendary editorial team has been handling the art process. They're invested in the process on a daily basis and have the expertise and access to be the best resource for Nelson.

Pokemon.com: You've written some Injustice comics, which are adaptations of the video game series. How has creating this adaptation differed from those you've worked on previously?

Buccellato: Injustice was quite a bit different in that it wasn't an adaptation of the video game storyline. We were actually filling in the five-year timeline … up until when the game story starts. So, as long as we didn't contradict the game story, we had the freedom to create entire new stories. In the case of POKÉMON Detective Pikachu, it really is a faithful adaptation of the film, as we tried to tell as much of the story as we could within the framework of the graphic novel medium.

Pokemon.com: You've worked on a lot of comics starring established characters like Batman, the Flash, and now Pokémon. What's it like coming into a beloved franchise that's been around for a while?

Buccellato: It was definitely a thrill. I started playing the Pokémon GO game on my iPhone with my son and quickly got addicted to “catching them all.” He quit playing, but I continued on. Personally, I think he quit because I was the far superior Pokémon Trainer.

Pokemon.com: Were you familiar with Pokémon before working on this book?

Buccellato: Absolutely. My first exposure to the world was working for an internet toy company in 1999–2000. Unfortunately, the dot-com bubble popped, and I didn't get my stock options. But I did get plenty of Pokémon swag.

Jones: I am a lifelong Pokémon fan, so being able to work on this is pretty amazing.

Pokemon.com: Did you read the Pokémon manga beforehand to see how other writers have treated Pokémon in comics?

Buccellato: I did not. My characterizations were pulled from the film and screenplay.

Jones: I was fortunate enough to work on several volumes of the Japanese-to-English translation of the Pokémon manga. It's been great to see and explore Ryme City through the scripts and film.

Pokemon.com: What were the challenges of writing “dialogue” for characters that don't talk?

Buccellato: It's no challenge at all. They can't talk! Seriously, though, there was some challenge in translating their actions-without-words into static images on the page. But Jann—who knows everything about Pokémon—was super helpful in guiding me and pointing out what parts I could cut or combine to save panels and pages.

Pokemon.com: Was there any push to make this comic fit into the “feel” of the established Pokémon world, or were you free to define your own tone for the story?

Buccellato: While the idea of putting my own stamp on the Pokémon universe sounds amazing, I felt my job here was truly to adapt the film as faithfully as possible.

Pokemon.com: You've written for Batman, who is sometimes known as “The World's Greatest Detective,” but how do you think his investigative skills stack up against those of Detective Pikachu?

Buccellato: That's not a fair comparison! Who are we kidding? Batman couldn't hold Pikachu's [hat]. The mighty Detective Pikachu also has him beat in cuteness and personality. … The only areas Batman wins are in gadgets and brooding. So, if I had a case that needed cracking, I'm going to Detective Pikachu! 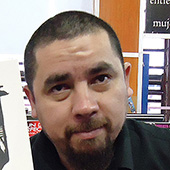 Pokemon.com: You've worked with lots of licensed properties before, such as Transformers, Teenage Mutant Ninja Turtles, and now Pokémon. What is it like trying to stay true to the look of the characters that fans expect while giving your own creative spin?

Nelson Dániel: I've had a lot of help from the editors. We worked on each Pokémon separately before starting to draw the book, and that has made me feel very comfortable drawing them. I'm sure the fans will appreciate the work we put in on it.

Pokemon.com: When drawing a comic adaptation of a movie, do you try to draw the panels in such a way that you replicate the look of the film (via camera angles, etc.), or do you try to give the comic a unique look and feel?

Dániel: Movies and comics are brothers, but they are also independent. We have incredible references from the film at our disposal, and of course, we take some. But we're building a comic, so the final decisions have to do with the language of comics and how things look on the page.

Pokemon.com: Because this graphic novel is based on a movie, you're obviously drawing characters that are being portrayed by real people on the big screen. Do you try to make your drawings look like the actual actors, or you do try to capture the “feel” of the characters?

Dániel: It is always a mixture, but in this case, I was a little more inclined towards the characters than the actors. It's a comic, and we need humans and Pokémon to live in the drawings together.

Pokemon.com: Before you began drawing this book, did you look at any Pokémon manga to see how other artists visualized Pokémon and the world in which they live?

Dániel: I did, but not too much. I try to look for references that are not so direct.

Pokemon.com: Were you familiar with Pokémon before working on this book?

Dániel: Of course! Mainly Pokémon the Series and the movies. And now I've become even more familiar with Pokémon because my children love it.

Pokemon.com: What's your favorite Pokémon to draw? Why?

Dániel: I have several favorites. Certainly Pikachu, Bulbasaur, Snorlax, and Snubbull, but I really love the design of Greninja…it is very dynamic to draw.

Pokemon.com: Which do you have more fun drawing: humans or Pokémon? Why?

Dániel: What a great question! Before this book, I had not drawn Pokémon—only humans. But in this case, there's a good mix of humans and Pokémon to add the environment. The mixture of the two is very important in Ryme City—not only in the city's history, but also in the way that the characters are defined by their interaction. I think there is a good balance between these elements, and it's difficult for me to decide just for one.

Pokemon.com: Could you give us a brief run-through of the creation of a comic book page from its rough sketches to its final, ready-for-print form?

Dániel: First, I create rough layouts that show the basic design and distribution of the panels on each page. Then, I do pencil drawings that are very detailed. Third, I ink the pages. In my case, I do this traditionally, directly on the pencils. Once that is done, all the art is scanned and sent in for approval. Finally, the digital color and text is added, and voila!

Many thanks to Brian Buccellato, Jann Jones, and Nelson Dániel for taking the time to talk to us about their work on the POKÉMON Detective Pikachu graphic novel adaptation. Look for it wherever books are sold starting July 23, 2019!

Behind the Scenes of a Graphic Novel 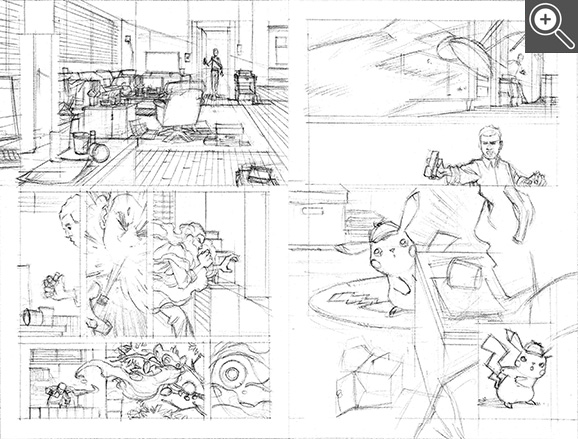 These are early pencil drawings of a couple of pages from the POKÉMON Detective Pikachu graphic novel. They may look a bit rough, but they give a good sense of what the final pages will look like. 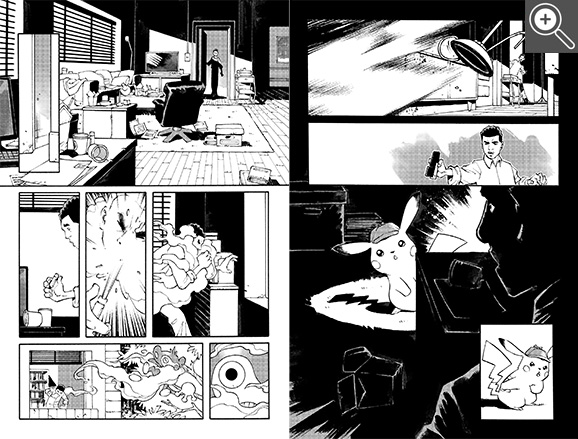 Once the pencil drawings have been finalized, the artist inks the artwork. As you can see, these pages feature a lot of black, which helps bring the noir look of the POKÉMON Detective Pikachu movie to life on the page. 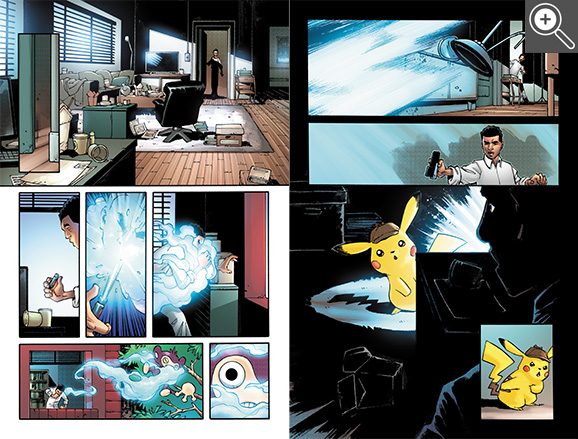 Now that the pages have been inked, it's time to add color to the artwork. The colorful contrast of Detective Pikachu and the menacing R gas really stand out among the dark shadows of Harry Goodman's apartment. 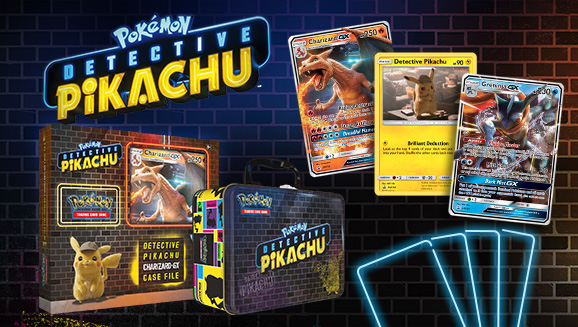