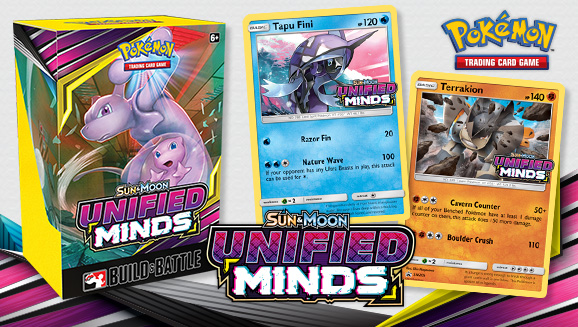 Pokémon TCG Build & Battle Boxes are an awesome way to have quick battles using cards from the new Sun & Moon—Unified Minds expansion. Each Build & Battle Box contains a 23-card Evolution pack, which includes an exclusive foil promo card and is designed to give you a strong foundation for building a new deck. Each box also includes four 10-card booster packs from Sun & Moon—Unified Minds. Try to include Pokémon of types that have a lot of cards in your pool, and finish up using your Trainer and Energy cards.

If you’re short on Energy cards, look for the Pokémon TCG: Basic Energy Box where Pokémon TCG products are sold—it contains 450 assorted basic Energy cards, which should be more than enough to energize all of your group’s decks. With a variety of Evolution packs and four booster packs, you’ll get to come up with a creative new deck each time you open a Build & Battle Box.

Take a look at the four promo cards available in Sun & Moon—Unified Minds Build & Battle Boxes, and get some tips to make the most of the one you receive. 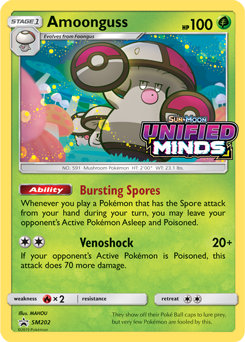 The Grass-type Pokémon Amoonguss has all the trappings of an awesome Build & Battle card—it’s easy to use, does a decent amount of damage, and causes Special Conditions that are hard to shake off in this format. Get Amoonguss out, then play another Foongus to your Bench to trigger its Bursting Spores Ability. Your opponent’s Active Pokémon will be both Asleep and Poisoned, and you’ll be all set to hit for a tidy 90 damage with Venoshock. There’s a good chance you’ll get to do that extra damage again on the next turn, doing enough damage to take out some of the heavier hitters you might battle! 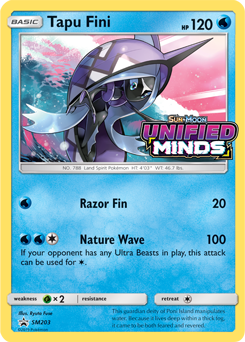 Trainers are rightly tempted by the power of Ultra Beasts. With Tapu Fini, you can take the wind out of their sails. Its Nature Wave attack can do 100 damage for a single Colorless Energy if the opponent has an Ultra Beast in play anywhere, including the Bench. Because Tapu Fini is a Basic Pokémon and the attack requires only Colorless Energy if the condition is met, this card can easily be added to any deck if you think you’re likely to face Ultra Beasts in your next battle. 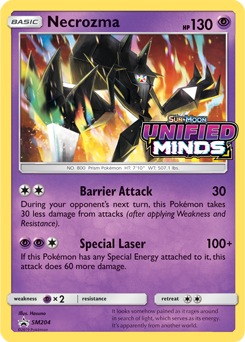 Depending on which cards you get in your Build & Battle Box, it may be a little challenging to get Necrozma going at its full potential. With Barrier Attack, you can do 30 damage and shave off 30 damage on your opponent’s return hit, but that’s not going to carry the day on its own. If you can get Special Laser up and running, however, Necrozma becomes a major threat on the field. Its high Energy requirement and the added value from attaching a Special Energy can be difficult in the Build & Battle format, but 160 damage is plenty to take out any non-GX Pokémon you’re likely to go up against.

The Legendary Terrakion features two rock-solid attacks that can make short work of a lot of the Pokémon you’ll face in this format. You might not have the time to set up the 110-damage Boulder Crush attack, since it requires four Energy. But Cavern Counter is more within reach, and with the right setup, it can do even more damage. Get Terrakion powered up on your Bench while your other Pokémon cover for it and take some damage in the Active position. Then, get Terrakion into action to start dropping 200-damage blows with Cavern Counter turn after turn. Just remember, that extra damage only happens if all of your Benched Pokémon are damaged—so beware of playing any new Pokémon to your Bench while you’re counting on Terrakion!

Each Build & Battle Box is a little different, so you can add your own creative twist. Have some quick and fun battles using cards from the new Sun & Moon—Unified Minds expansion today!