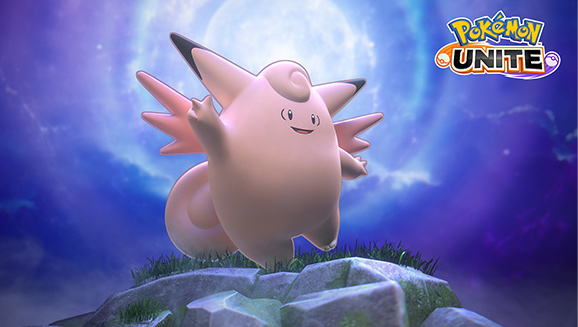 Channel your cosmic power and eclipse the competition with a Melee Supporter that is out of this world.

Follow Clefable into battle or add the Fairy Pokémon to your team in Pokémon UNITE! With the power of the cosmos on its side, this Melee Supporter is ready to shed some Moonlight on Aeos Island. You can obtain Clefable for 12,000 Aeos coins or 575 Aeos gems at the Unite Battle Committee shop. Clefable will only be obtainable with Aeos gems for the first seven days of its release. 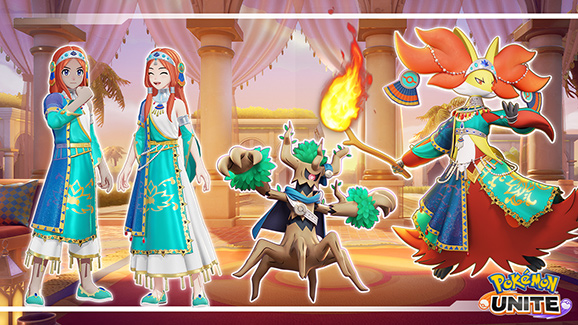 Read on to learn more about everything Clefable has to offer in Pokémon UNITE’s latest update—and to pick up some tips before disarming the competition on Aeos Island!

Clefable begins each match as Clefairy, but it will evolve into Clefable at Lv. 4. The Pokémon’s basic attack becomes a boosted attack with every third attack, dealing increased damage. Clefairy and Clefable both have the Magic Guard Ability, which grants the Pokémon a shield when it restores an ally Pokémon’s HP. The strength of this shield is proportional to the amount of HP restored.

Clefairy immediately restores HP to itself and nearby ally Pokémon.

The user lets out a charming cry, dealing damage to nearby opposing Pokémon and decreasing their movement speed for a short time.

Clefable continually restores HP to itself and nearby ally Pokémon for a short time. Clefable’s movement speed is increased while Moonlight is active. Moonlight can be upgraded to widen its area of effect and increase its effects’ duration.

Clefable attacks nearby opposing Pokémon with an energy-draining kiss. Each opposing Pokémon hit by the kiss receives damage and releases an air kiss. These air kisses will travel to Clefable’s nearby ally Pokémon with the lowest HP and restore that Pokémon’s HP. If no ally Pokémon are near Clefable, the air kisses will return to Clefable and restore its HP. Draining Kiss can be upgraded to widen its area of effect and increase the amount of HP it restores.

Clefable waggles its finger, restoring HP to ally Pokémon in the area of effect. The lower an ally Pokémon’s HP is, the more HP Wonder Wish restores to that ally. Afterward, Clefable gets a random move that it can perform by using its Unite Move again within a set amount of time. Note: Some random moves will activate immediately.

Clefable joins the Pokémon UNITE roster as one of the most unique Supporter Pokémon, offering a healthy balance of opponent disruption and ally healing. Both Moonlight and Draining Kiss provide powerful area-of-effect healing in team fights, while Gravity and Follow Me can hinder anyone trying to get onto ally carries with low durability. A moveset featuring Draining Kiss and Follow Me allows Clefable to go on the offensive when necessary but also provides plenty of utility when it needs to protect its allies, making the Pokémon a solid double threat. Wonder Wish is also a powerful wild card for Clefable, allowing the Supporter to dish out some quick damage depending on the move.

Speedsters hate being locked down by hindrances, and Clefable has plenty of options for stopping a rampaging Dodrio in its tracks. Gravity can directly negate Dodrio’s Jump Kick as well as the dash from its boosted attacks—and it makes Dodrio unable to act for a short time, allowing Clefable’s teammates to take it down a notch. Follow Me doesn’t have the same hindrance potential as Gravity, but forcing Dodrio to attack Clefable is another way to keep its sprint gauge from charging.

Mew is one of the most powerful Ranged Attackers in Pokémon UNITE. Between its long-range Solar Beam and the seemingly endless mobility granted by Agility, Mew is a difficult Pokémon for Clefable to lock down. If at any point Clefable attempts to target Mew with Follow Me and fails to chain hindrances with its allies, Clefable has few options left against Mew’s superb damage and movement potential.