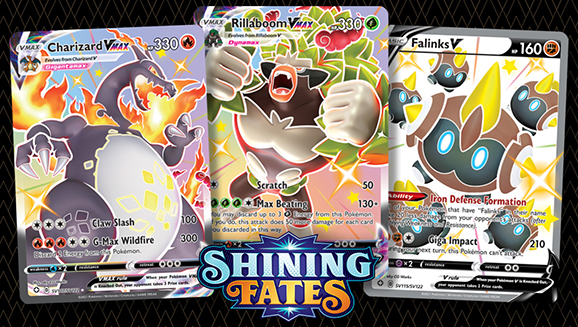 Get a glimpse of the playful artwork and feisty Pokémon in the most recent Pokémon TCG expansion.

In addition to providing yet another opportunity to hone battle skills and obliterate opposing Pokémon Trainers, the Pokémon Trading Card Game offers exciting opportunities to view Pokémon in a new light with each new card. Some cards contain Pokémon powerful enough to overpower an opponent with a single attack. Others contain Pokémon that simply make you smile or possess a special Ability that, when used effectively, can subtly influence the trajectory of a battle. The Pokémon TCG: Shining Fates expansion boasts more than 190 cards featuring Pokémon ranging from adorable to ferocious, including some that are ferociously adorable! Here is a glimpse of a few of the cards in the Shining Fates expansion. 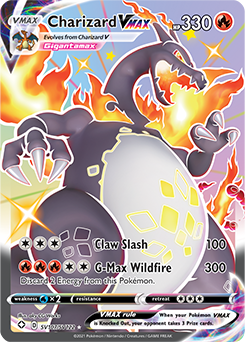 Illustrator aky CG Works' Charizard VMAX manages to simultaneously capture the Flame Pokémon's fiery attitude and battle style while still revealing a little of its playful side. Surrounded by its signature flames and with menacingly sharp claws, Charizard VMAX almost doesn't need the whopping 330 HP to inspire dread in opponents. The card's G-Max Wildfire attack deals a hefty 300 damage with the unfortunate downside that the Trainer must discard two Energy cards when using the attack. Despite Charizard's blazing reputation, the card's pastel-colored background and colorful details will make it a fun card to put into play. 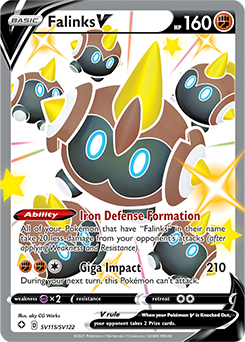 Falinks may not be as much of a household name as, say, Charizard or Pikachu. But the Formation Pokémon is undeniably packing some offensive and defensive battle energy, including a Giga Impact attack that deals 210 damage and an Iron Defense Formation Ability that allows all Falinks Pokémon to take 20 less damage from attacks. Another card by illustrator aky CG Works, it depicts the six individuals that comprise a Falinks formation spread across the card, giving the impression that the viewer is about to be swarmed! 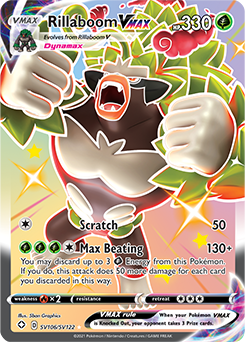 Rillaboom's strength and personality are on full display in illustrator 5ban Graphics' depiction of the Drummer Pokémon. Boasting a show-stopping 330 HP and a Max Beating attack that deals between 130 and 280 damage, Rillaboom VMAX is one of those cards that will make your opponent's heart skip a beat when it appears. The card's whimsical, vivid color palette does nothing to undermine Rillaboom's scrappy expression and body language—highlighted by the Pokémon's massive fists in the foreground. If anything, the pastel color palette magnifies Rillaboom's intensity, making for an exciting card that will be tough to take down. 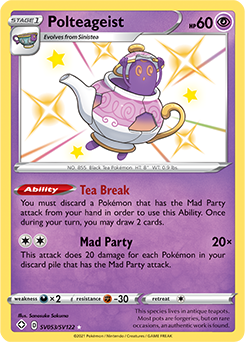 Just try not to chuckle at the sight of illustrator Sanosuke Sakuma's purple specter peeking out of its cracked teapot. The Psychic-type Polteageist returns with its aptly-titled Mad Party attack that deals 20 damage for each Pokémon in the discard pile, and a Tea Break Ability that allows its Trainer to draw two cards after discarding a Pokémon that knows the Mad Party attack. Polteageist might not have the highest HP at 60, but the Pokémon and card have an undeniable eccentric charm that just might lull your opponent into a false sense of complacency.

It doesn't get much more adorable than a flying Dedenne possibly about to belly flop onto its opponent. But illustrator Mizue's simple card—focusing on the Antenna Pokémon with a few visual bursts for added drama—calls attention to every detail of the Pokémon's form. From its coiled tail with a star at the end to its delightfully rotund form and distinctive antennae, Dedenne might not look particularly fierce, but it still packs a punch. With an HP of 70 and a Mad Party attack that deals 20 damage for each Pokémon that knows the Mad Party attack in the discard pile, Dedenne's battle prowess should not be overlooked. 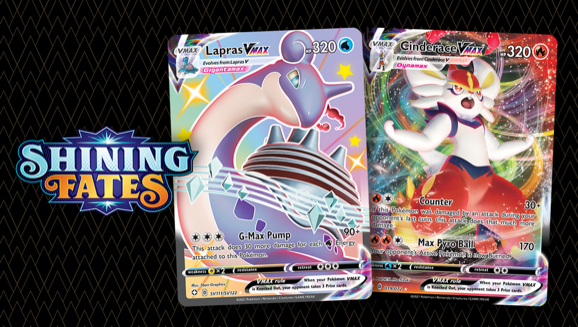 Take an early look at some of the incredible new cards that you’ll find in the latest Pokémon TCG expansion.