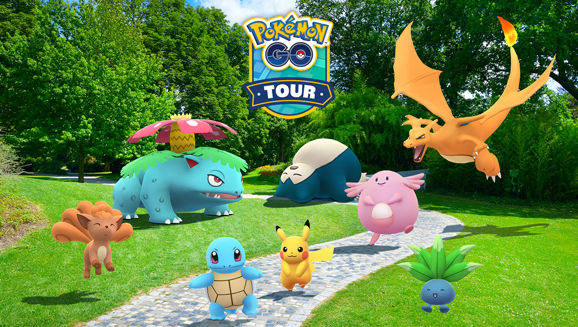 Celebrate one of the Pokémon world’s most famous regions with Pokémon GO Tour: Kanto, a ticketed Pokémon GO event. You’ll have the opportunity to collect the first 150 Pokémon discovered in Kanto—in a single day! The event will take place on Saturday, February 20, 2021, from 9:00 a.m. to 9:00 p.m. local time, and tickets are already available in the in-game shop for US$11.99 (or the equivalent in your local currency). If you purchase a ticket by Wednesday, January 13, 2021, at 11:59 p.m. PST, you’ll also receive access to a January Community Day Special Research story on January 16 and a February Community Day Special Research story on February 7.

In a nod to the games that originally introduced the Kanto region, Pokémon Red and Pokémon Green, Trainers participating in the event will begin by choosing either Red Version or Green Version. Different Pokémon will appear in the wild depending on the version you select, so you’ll need to trade with friends in order to collect all 150 Pokémon included in the event. To help with this, the maximum trading range will be extended to 40 km for the duration of the event.

Plus, if you complete the Pokémon GO Tour: Kanto Special Research, you’ll earn access to additional event-exclusive Special Research that rewards an encounter with Shiny Mew!

Even if you don’t purchase a ticket for Pokémon GO Tour: Kanto, you’ll still have the opportunity to catch some Pokémon first found in the Kanto region in the wild and in raids. During the event, Articuno that knows Hurricane, Zapdos that knows Thunder Shock, Moltres that knows Sky Attack, and Mewtwo that knows Psystrike will be appearing in five-star raids!