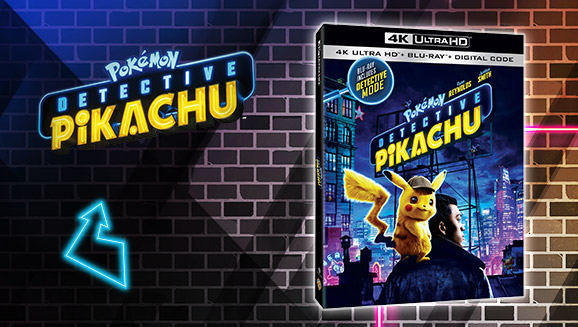 Watch POKÉMON Detective Pikachu whenever you want on Blu-ray and DVD—and get a special Pokémon TCG card.

It's about time for another trip to Ryme City, wouldn't you say? Well, you're in luck, as the hit film POKÉMON Detective Pikachu has arrived on home video! The movie is available to purchase as a 4K UHD Combo Pack, Blu-ray Combo Pack, or DVD Special Edition. As a limited-time bonus, these physical versions of the movie include a special promo card from the Pokémon Trading Card Game!

If you somehow missed the news surrounding the movie’s original release, POKÉMON Detective Pikachu tells the story of Tim Goodman (played by Justice Smith), who travels to the bustling Ryme City—a place where humans and Pokémon live side by side—to unravel the mysterious disappearance of his father. Tim is joined on his adventure by an aspiring reporter named Lucy Stevens (Kathryn Newton) and, of course, his father’s Pokémon partner, Detective Pikachu (voiced by Ryan Reynolds).

The 4K UHD Combo Pack, Blu-ray Combo Pack, and DVD Special Edition versions of the movie are jam-packed with bonus features, including:

The 4K UHD Combo Pack and Blu-ray Combo Pack also feature a special Detective Mode, which allows you to watch the movie like you’ve never seen it before with a world of hidden clues, behind-the-scenes footage, pop-up trivia, Pokémon facts, fun featurettes, Easter eggs, and more!

The movie is also available to own from select digital retailers including Amazon, FandangoNOW, AppleTV, PlayStation, Vudu, Xbox. Just keep in mind that the digital version does not include the special Pokémon TCG promo card.

Whether you plan on getting POKÉMON Detective Pikachu digitally or physically, you can look forward to solving the mystery again and again at home! Look for the home video release wherever movies are sold.