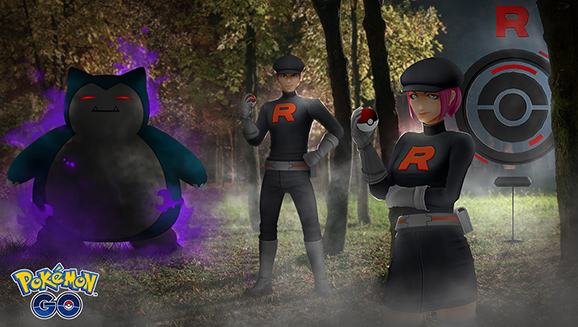 Challenge these devious troublemakers at PokéStops, and add their Shadow Pokémon to your team.

Look out, Trainers! Big trouble is arriving in the world of Pokémon GO in the form of a mysterious organization known as Team GO Rocket, which is invading PokéStops with strange Shadow Pokémon. Sadly, these Shadow Pokémon exhibit odd behavior and appear to be in pain. Professor Willow and the team leaders have been working on ways to restore the PokéStops and rescue the Shadow Pokémon.

As you're out exploring, you'll notice that some PokéStops are discolored. This is your clue that Team GO Rocket is hanging about. Interact with a discolored PokéStop, and you'll begin an encounter with a Team GO Rocket Grunt—get ready to battle! After a successful battle, you'll have an opportunity to catch one of the Shadow Pokémon that Team GO Rocket has carelessly abandoned.

After catching the Shadow Pokémon, you'll be able to use a process called Purification to return the Shadow Pokémon to its normal state. Because these Purified Pokémon are so grateful for your help, you'll find that they become stronger than their standard counterparts.

These Shadow Pokémon are counting on you, Trainers! Get your team ready to challenge Team GO Rocket, and add some Purified Pokémon to your ranks.