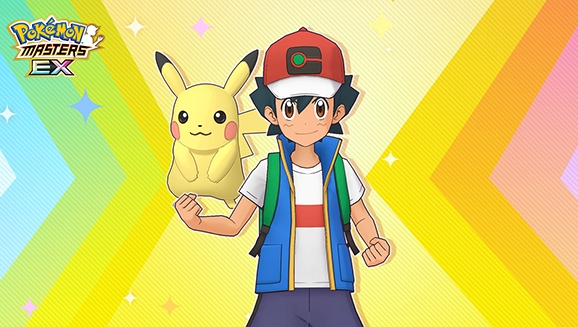 The famous duo show off the power of friendship with their Buddy Move, B Thunderbolt!

Alongside the fanfare of Pokémon Masters EX’s three-year anniversary, Ash & Pikachu from Pallet Town are set to make their debut on Pasio. This Electric-type strike sync pair may be new to the island, but Ash & Pikachu are ready to prove that they are always in sync with their powerful Buddy move, B Thunderbolt—the first of its kind in Pokémon Masters EX. Buddy moves activate after meeting special conditions and have powerful effects that showcase their users’ unshakable bonds of friendship. After Ash & Pikachu use any move three times, they can begin to shock their opponents with B Thunderbolt, a move that never misses and does damage based on how many gauges are used, up to a maximum of six.

Ash & Pikachu will be available to scout in Pokémon Masters EX until October 16, 2022, at 10:59 p.m. PDT. See below for details, as well as recommended sync pairs to partner with this electrifying duo!

Ash & Pikachu have no problem raising their own Sp. Atk stat and critical-hit rate with the move Going All Out!, but there’s more than one way to boost a sync pair’s damage. Volkner & Luxray may not raise the stats of their allied sync pairs, but their move Electric Terrain increases damage done by all Electric-type moves. With Electric Terrain in play, Ash & Pikachu’s Thunder, B Thunderbolt, and Best Buds 10,000,000 Volt Thunderbolt all receive a significant power-up, making the pair even more electrifying. Volkner & Luxray are available to scout from the general pool of 5★ sync pairs, as well as from the 5★-Guaranteed Ticket Scout and 5★-Guaranteed Sinnoh Ticket Scout.

Ash & Pikachu’s B Thunderbolt is a powerful move, but it also requires a significant amount of move gauge slots, making Speed important for the pair from Pallet Town. While they may be unable to raise their own Speed by more than two ranks, Skyla & Swanna’s Take Flight can easily raise Ash & Pikachu’s Speed up to six ranks total while also raising their Defense by four ranks. Skyla & Swanna also have Potion, which can be used twice and heals 40% of an allied sync pair’s total HP. Skyla & Swanna can be acquired after completing Chapter 5 of the PML arc of the main story.