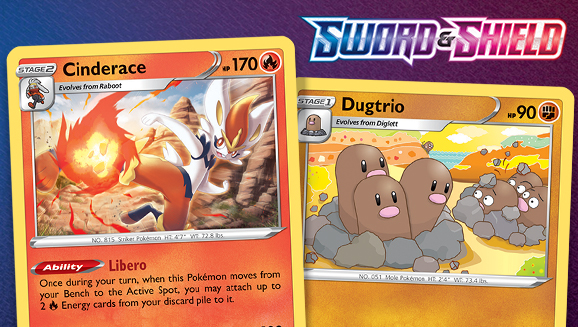 Every Pokémon TCG card is a little canvas featuring incredible art. See our favorites from the latest expansion.

The new Pokémon TCG: Sword & Shield expansion is out, so now's a great time to look at all the fresh art on over 200 cards. Seeing how the Pokémon (and other aspects of the Pokémon world) are portrayed is nearly as much fun as battling with them.

Check out some of the great art we discovered in the expansion, and be sure to look through your own cards to find your favorite artwork, too! 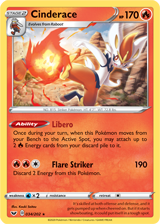 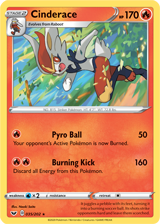 It's not uncommon to see two cards featuring the same Pokémon in an expansion, but it's pretty rare when there are three of them, as is the case with Cinderace in Sword & Shield. When it happens, it gives us a great opportunity to see how multiple artists depict the same subject. Kouki Saitou puts Cinderace (034/202) into furious action with a strong motion blur that draws your attention to the burning soccer ball that the Striker Pokémon is kicking—apparently straight at you! Naoki Saito also puts Cinderace (035/202) in motion, but more to show off the Pokémon's fleet-footedness. Stripped of background detail, this Cinderace looks ready to sprint right out of the card. Finally, Shin Nagasawa presents Cinderace (036/202) in a more heroic pose that shows off the confidence it will bring to your battle!


We're Having a Ball 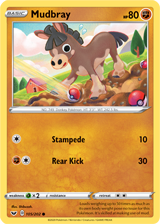 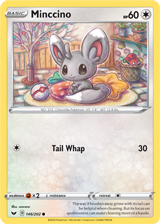 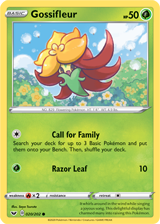 For all the attention that the Pokémon themselves get, one of the most iconic things about the Pokémon world is the simple and brilliant Poké Ball. Many artists add the shape of the Poké Ball into their works in fun, and sometimes subtle, ways. The stunned look on Mudbray's (105/202) face as it stands among an array of Poké Balls, presumably thrown by an unseen Trainer in the hopes of catching it, is so great. It captures a familiar scene in a whole new way. Minccino (146/202) is also surrounded by Poké Balls…or maybe not? The Premier Ball looks like it's actually a plush toy, as does the Voltorb in the basket. Given Minccino's contented expression, it seems that even Pokémon like to play with Poké Ball toys. And finally, if you look really closely at the flowers behind Gossifleur (020/202), you'll notice that one of them is in the shape of a Poké Ball, too! Keep your eye out for Poké Balls big and small throughout your card collection. 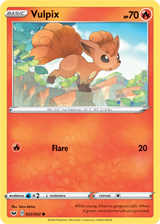 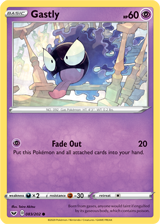 In browsing the Sword & Shield expansion, our eyes were drawn to a couple of cards by artist Taira Akitsu. Akitsu has worked on art for a number of games, but these are the first cards the artist has illustrated for the Pokémon TCG, and they're both brilliant. One card shows a softly lit Vulpix (022/202) balancing precariously at the bottom of some stone steps on a nice sunny day, while the other depicts Gastly (083/202) floating down a crooked set of wooden stairs while lanterns swing ominously in the background. Both cards capture the character of the Pokémon perfectly. We can't wait to see what other ways Akitsu will envision Pokémon in future expansions if the opportunity arises. 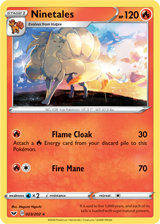 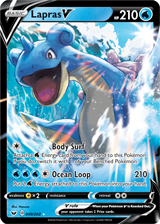 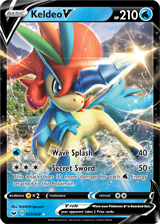 Lens flare, that is. Caused by the optics in a camera lens when light hits it in a certain way, lens flare can make scenes feel much more dramatic and intense. Artists will sometimes fabricate lens flares to add this same feeling. You can instantly see this effect in Ninetales (023/202), with the lens flare appearing just behind the Pokémon, giving Ninetales a magisterial air. Lapras V (049/202) uses lens flare in a slightly different way by adding a shock of radiant rainbow color to a scene that would otherwise be dominated by deep blues of the water, sky, and Lapras itself. If the first two examples were exercises in subtle ways to bring more out of the scene, Keldeo V (053/202) flips the script by making the lens flare the most dynamic part of the whole image. It almost seems like Keldeo is interacting physically with the brilliant light glinting off its horn. These are but a handful of examples in the Sword & Shield expansion; it's fun to look for them and to try to get a sense of what the lens flare adds to each piece of art. 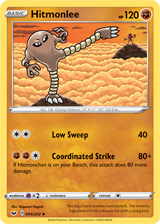 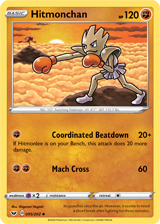 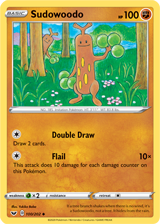 One of our favorite topics is Pokémon appearing on other Pokémon's cards, and in the Sword & Shield expansion, there are a number that fit the bill—including quite a few Fighting-type Pokémon who get to share the spotlight. Hitmonlee (094/202) and Hitmonchan (095/202) are two highlights, with artist Shigenori Negishi superbly showing the same scene from two different perspectives. Sudowoodo (100/202) also gets a visitor when another Sudowoodo peeks out furtively from behind a tree. And then our pick for funniest card in the set shows Dugtrio (093/202) staring at another Dugtrio who has apparently just emerged from the ground, wide-eyed in apparent disbelief at something. And that Diglett in the background has a dilemma of its own—it's emerged from the ground a bit too close to the waves, as originally seen on its own card by the same illustrator way back in EX Crystal Guardians (50/100)! We love these images for how they show Pokémon going about their everyday lives in a world full of other fantastic Pokémon. 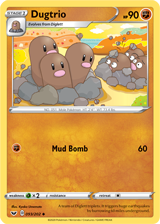 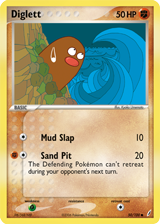 We're really just cracking the surface here, and there are many more pieces of art to appreciate in the Sword & Shield expansion. Whether you're a collector or competitive player, be sure to take a moment to enjoy the art in your card collection.