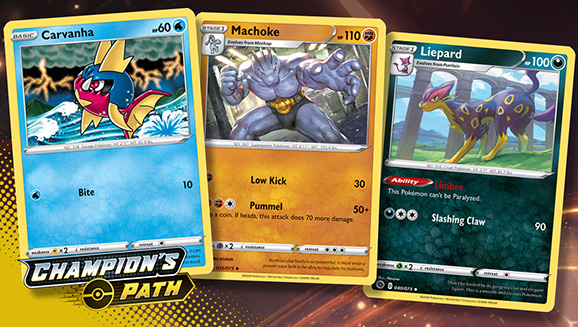 Celebrate Evolution, indulge your love of a beautiful skyscape, and head to the city with the latest expansion.

With thousands of different Pokémon TCG cards in circulation, you might be tempted to think you've seen it all. But one of the most exciting aspects of a new expansion is the way the Pokémon TCG artists never seem to run out of fresh ideas and interesting ways to represent Pokémon. Whether it's a stunning setting that captures the eye, a compelling Evolution chain, or simply some interesting architecture, there's always something that demands a more thorough perusal. These are the cards from the Pokémon TCG: Champion's Path expansion that we thought merited a second look. 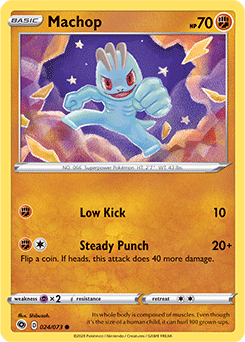 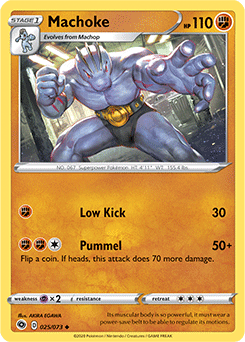 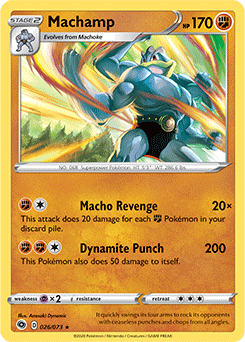 Evolution is one of the most fascinating components of the Pokémon world because it can transform an adorable, non-threatening Pokémon into a fierce and unfamiliar species. Art is transformative as well, as is on full display with the Machop to Machamp Evolution chain in the Champion's Path expansion. It places art for this trio of Pokémon in the hands of three different artists with fascinating results. Illustrator Shibuzoh. kicks off the trio with a punchy, illustrative depiction of the Basic Fighting-type Pokémon Machop. Boasting a rich texture resembling chalk art and dynamic depth of field achieved by oversizing Machop's swinging fist, this card is difficult to forget. Illustrator AKIRA EGAWA's Machoke is no less memorable: the Pokémon radiates menace with a muscular structure that would not be out of place at a bodybuilding competition. The card's background is rich in detail, from the destroyed car to the trash can and grimy concrete pillars. And then there's Anesaki Dynamic's Stage 2 Machamp, which somehow combines the beauty of Shibuzoh.'s Machop with the physical power of EGAWA's Machoke. The motion of Machamp's iconic punch is captured in a colorful blur of energy and force. Machamp embodies the unlikely beauty of a Pokémon battle while retaining the forceful physicality inherent to Fighting-type Pokémon.


Eyes on the Skies 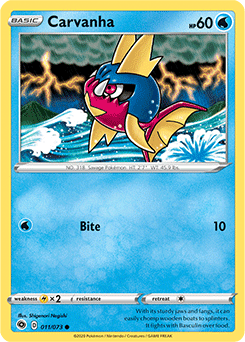 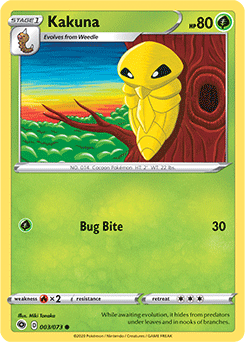 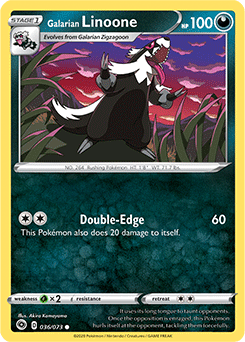 Who doesn't love a dramatic sky? Whether we're talking about a spirited sunset or a riotous lightning storm, there's no denying the aesthetic significance of a good skyscape. The artists who worked on this latest expansion certainly got the memo, creating cards dominated by memorable skies. Among these are Miki Tanaka's Kakuna card, which delivers a vivid spectrum of color. No meek pastel sunsets for Tanaka. Instead, tangerine orange bleeds to yellow beneath a rich layer of cobalt blue. Then there's Shigenori Negishi's Carvanha card, which mirrors the Savage Pokémon's ferocious nature with bright forks of lightning shooting down from the sky. Negishi's skyscape is so intense you can practically hear the cracks of thunder in the distance. Perhaps the best aspect of this skyscape is that it doesn't eclipse the Pokémon in the foreground; the intense sky complements the Basic Pokémon's personality and appearance. Akira Komayama's Stage 1 Galarian Linoone brings us back into the realm of picturesque sunsets. The Darkness-type Pokémon strikes an aggressive power pose against a sky dominated by violet and rosy tones so intense the color is reflected in the blades of grass at the Pokémon's feet. While the setting might be more befitting an engagement photo shoot than a Pokémon battle, Galarian Linoone doesn't seem bothered by the stunning sunset happening around it. If anything, the Rushing Pokémon is clearly digging the dreamy skyscape. 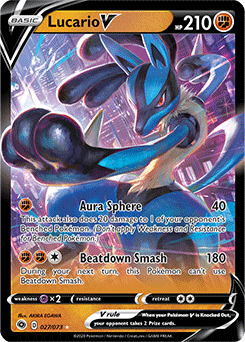 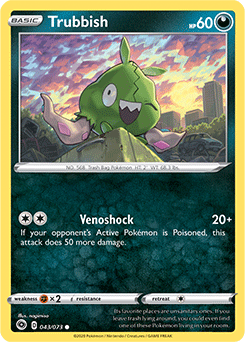 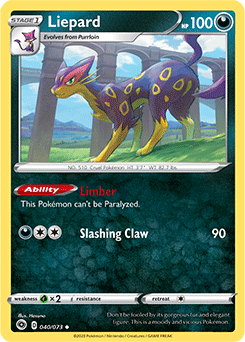 While there aren't necessarily rules around the settings depicted in Pokémon TCG cards, most artists tend to depict Pokémon in a natural setting. Whether swimming in the ocean, strolling through a field, or perched in a tree, the Pokémon on the cards don't seem to do a lot of city living. So it's especially noteworthy when interesting architecture finds its way into the background. AKIRA EGAWA's Lucario V is so detailed it might take a while to notice the background behind it—but once you do, the undeniably urban landscape gives the battle a completely different feel. A nocturnal Pokémon scrap in the city has an edgier vibe than a more natural or daytime setting. Illustrator Hasuno's Liepard evokes the best of both worlds. Stalking the Wild Area, Liepard is framed by what looks to be the iconic bridge connecting Motostoke and Galar Mine No. 2. The setting is both a clever reminder of one of Galar's most popular Pokémon-catching hotspots and a visually interesting frame for the Darkness-type Pokémon. And while it's no surprise to find Trubbish in a pile of rubbish, illustrator nagimiso managed to capture the grime of a junkyard, a not-too-distant cityscape, just enough trees to distance the Pokémon from the city, and a beautiful pastel sky. And somehow, despite all these details, Trubbish remains the card's focal point, clearly exhilarated by its proximity to so much trash. The Pokémon's expressive joy contrasts brilliantly with the card's setting, resulting in an overall humorous effect that you might not expect from a Pokémon TCG card.

Find your own favorite and explore your favorite artistic themes with the Pokémon TCG: Champion's Path expansion!