A Look at the Early Days of Pokémon Research in Pokémon Legends: Arceus

Check out what the Hisui region was like when people were learning to live alongside Pokémon.

The world of Pokémon Legends: Arceus is unlike any you've explored before. Set in the Sinnoh region's distant past (when it was known as the Hisui region), things are very different than what you're used to seeing in Pokémon games. The relationship between humans and Pokémon is much more complex in Hisui, and the lack of modern-day technological advancements changes the way you interact with the world. To keep you from experiencing culture shock, we've put together a list of some of the differences to expect when you set off on your journey across Hisui.


A Master of Pokémon 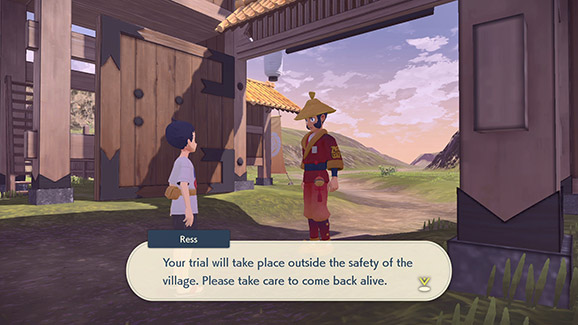 Perhaps the most surprising aspect of the Hisui region is that people are usually wary of—and sometimes downright afraid of—Pokémon. Far from the loving bond of friendship that's shared between Pokémon and people in modern times, the residents of Jubilife Village seldom leave the safety of the guarded village gates for fear of running into a wild Pokémon.

This abundance of caution isn't without good cause, though. At the time Pokémon Legends: Arceus takes place, Jubilife Village has only been around for two years. With some Pokémon prone to attack any human that encroaches on their territory, these early years have proved to be quite a trial. It can be dangerous out there, but fortunately, your aptitude for battling and catching Pokémon makes you a perfect fit for the Galaxy Team's Survey Corps, which is dedicated to studying the Hisui region's Pokémon. 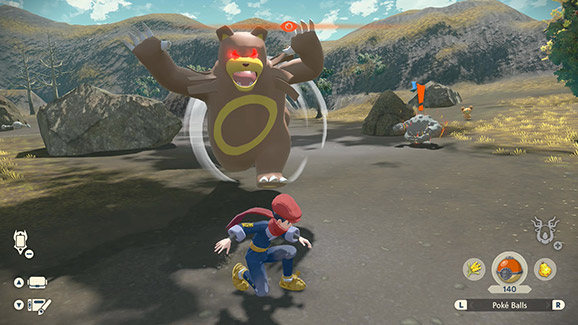 As you settle into the community in Jubilife, though, you'll begin to see people warm up to Pokémon. Some will want you to catch and show them Pokémon to sate their curiosity while others will ask you to help them find Pokémon partners of their own. Humans and Pokémon even begin working side by side in the Jubilife Village fields. It's actually quite heartening to see the cooperation between people and Pokémon begin to take hold. 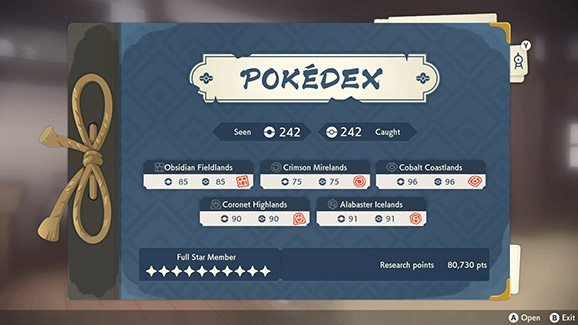 When conducting research on Pokémon, there are few tools more valuable than a Pokédex. These high-tech devices record all sorts of useful information about the Pokémon you encounter along your journey. Of course, in Pokémon Legends: Arceus, the Pokédex takes on a wholly different form. At the start of your adventure in Hisui, you meet Professor Laventon, who is putting together the “first complete record of its Pokémon.” And as mentioned above, you're uniquely qualified to help the professor accomplish his noble goal.

Far from the pocket-sized computer with which you might be familiar, this Pokédex—Hisui's first Pokédex—is a humble notebook bound with string. Loose papers sticking out the sides of the book suggests the professor frequently jots down his observations on whatever scraps he can find before tucking them into the Pokédex to be properly recorded later.

Since this is Hisui's first Pokédex, it requires a bit more work to complete each Pokémon's entry. You'll have to complete multiple research tasks—like catching multiple of the same species or observing them using a specific move a set number of times—to bring each Pokémon's Research Level up to 10. When you do, you'll end up with completed Pokédex entries that are clearly written to be personal observations from Professor Laventon. 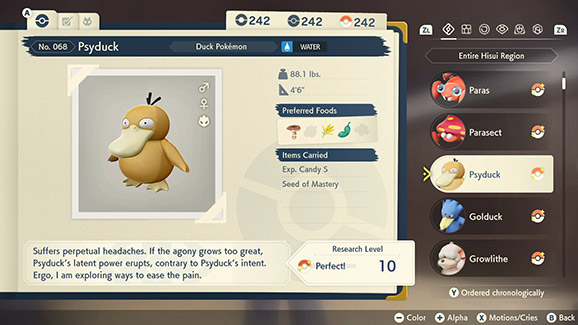 The professor occasionally interjects with his own thoughts on the Pokémon's behavior or with advice on interacting with them. These expanded research tasks and intimate details really make it feel like you're a pioneer in the field of Pokémon research.

Poké Balls are a Pokémon Trainer's most invaluable tool. After all, it would be very difficult to catch Pokémon without a bag full of these handy tools. They were created to take advantage of Pokémon's innate ability to shrink themselves down to a small size, allowing them to fit comfortably inside the contoured sphere. In modern times, Poké Balls are manufactured in factories like the one found outside of Laverre City in the Kalos region. But in the time of the Hisui region, Poké Balls have only just recently been invented.

Without countless Poké Balls rolling off a production line, you'll often have to make your own in order to continue your research. Luckily, Poké Balls can be crafted by hand out of an Apricorn and a Tumblestone, both of which can be readily found throughout the Hisui region. You'll also learn to use other materials—like Iron Chunks and different kinds of Tumblestones—to fashion new varieties of Poké Balls. Eventually, merchants will begin selling Poké Balls, saving you the effort of having to handcraft your own. But it's always good to keep a stash of crafting materials at the ready in case you happen along a Pokémon out in the field and your Poké Ball supply is low!

And remember, because Poké Balls are a relatively new creation, many people have yet to master their use. Your skills at throwing these curious creations will serve Professor Laventon and the Galaxy Team well.


At Home on the Range 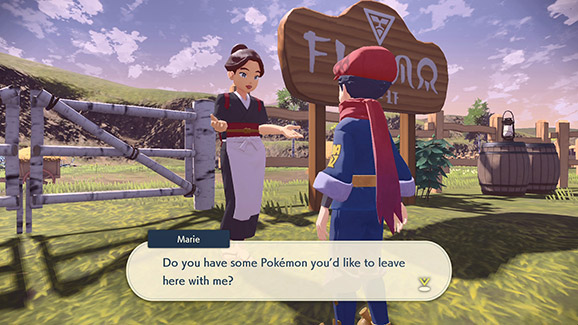 Have you caught too many Pokémon to carry? Don't worry, you can always pop into a Pokémon Center and store them away in one of their handy PCs— Oh, right. Here in the Hisui region, they haven't even invented Pokémon Centers yet...let alone PCs!

So, what's a Trainer supposed to do with all the Pokémon that they can't carry with them, but don't want to release? Luckily, Jubilife Village offers the perfect “storage” solution in the form of expansive pastures. These grassy meadows operate much like the boxes in the modern-day PCs, except instead of being stored inside a computer, your Pokémon will freely roam these fenced-in areas when they're not accompanying you on your travels.

You can access your pastures by chatting with Marie, the villager who watches over them in Jubilife Village, or by talking to the Galaxy Member stationed at any of the base camps. You'll have access to only a few pastures at first, but as you collect more Pokémon and store them, you'll gain more pastures in which your Pokémon partners can hang out.

Much like storing Pokémon, trading Pokémon in modern times is a high-tech affair. When you and another Trainer agree to trade Pokémon, the process typically involves a lot of flashy light displays or Poké Balls travelling though a network of tubes to arrive at their new destination. Trading methods may not be as advanced in the Hisui region, but they're no less impressive.

Early Poké Balls are equipped with a small flare that ignites when a Pokémon has been caught within it. When you initiate a trade with one of these Poké Balls, that small flare increases in strength, turning it into a powerful rocket that launches the Poké Ball into the sky. The two Poké Balls pass each other en route to their destination before arriving in their new partner's game.

Fortunately, the rocket's flame causes the Poké Ball to slowly descend to the ground before it fizzles out, allowing the Poké Ball to land with a gentle flop. You've got to admire the engineering that goes into these early Poké Balls!

Life in the Hisui region may seem a bit more primitive than what we're used to in the world of Pokémon, but there's no denying the charm of seeing how people interacted with Pokémon in the past. There's a certain thrill in forging those first steps towards truly understanding Pokémon and helping form the bonds that made humans and Pokémon become such close friends. 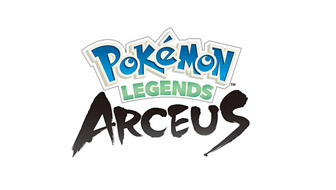 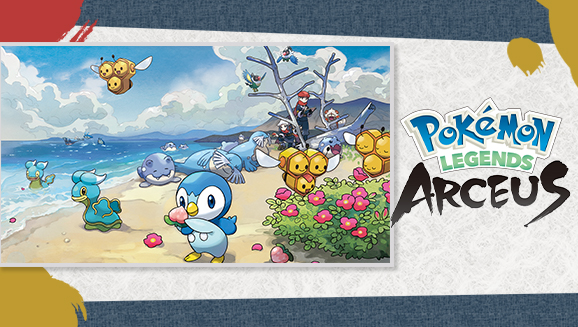