The 2018 Pokémon World Champions Have Been Crowned!

See how the final matches went down at the Pokémon TCG and Video Game World Championships in Nashville.

We're all done here in the Music City as the Pokémon World Championships have come to a close. Today we got to witness the best of the best from the Pokémon TCG and video game fields as they battled for the title of Pokémon World Champion. With some great play and an awesome crowd rooting on their favorite competitors, it was the perfect way to cap off an incredible weekend.

Congratulations to our new Pokémon TCG, video game, and Pokkén Tournament World Champions, and to all the players who battled here at the 2018 Pokémon World Championships! 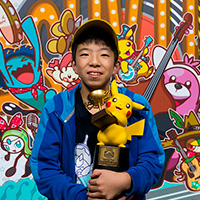 The Final rounds kicked off in the Pokémon TCG between Juniors Naohito Inoue of Japan and Sebastian Enriquez of the United States. It would be a mirror match between two similar Buzzwole and Lycanroc decks.

Both played conservatively to start the game, knowing that every decision could be the one that determines the World Championship. Naohito worked on getting Sebastian down to four Prize cards so that Sledgehammer bonus damage could Knock Out a Pokémon-GX. The first game snowballed from there, and Sebastian couldn't find a way to recover.

In game 2, it initially looked like Naohito would cruise to victory. He got out to a fast start and appeared to be in total control. But he ran into some tough draws, and a crucial Max Elixir turned up empty. This was enough for Sebastian to claw his way back into the match. It was a spirited resurgence, but Naohito eventually found his footing again, and his non-Pokémon-GX Buzzwole ultimately did a lot of the heavy lifting to end the match. His smart play earned him the title of Pokémon TCG Junior Division World Champion. 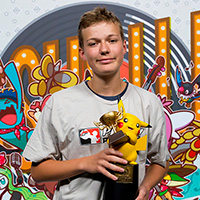 The Senior Division final bout was a rematch of the Oceania International Championships finals, adding a little extra drama to this already exciting match. Connor Pedersen of the United States prevailed in that first meeting, so Denmark's Magnus Pedersen certainly had redemption on his mind.

Pokémon-GX pretty much dominated the field all weekend long, so it was a little surprising to see the decks that propelled Connor and Magnus to the Senior Division finals table. Neither of their decks featured the usual attacking Pokémon-GX we'd seen, meaning the game was much more back-and-forth than most matches in the tournament. However, Magnus was playing Banette-GX, a card that must've surprised a lot of his earlier opponents. The first game was even all the way to the end, with Prize cards being traded back and forth. Connor was in a decent position to take game 1, but ran out of resources to give his Buzzwole enough damage to earn victory, and he ended up conceding to Magnus.

Connor looked to be in excellent position early in game 2, and when Magnus recognized how many crucial cards were in his Prizes, he decided to quickly scoop and give Connor the victory. Magnus was confident that he could win a more drawn-out battle in the final round, given access to the right cards. It was a bold strategic move that he hoped would pay off.

In the winner-take-all third match, the intensity went way up. Once again, the momentum shifted multiple times between the two players, and the match proved highly tactical. Magnus's Banette-GX and its Shady Move Ability turned out to be the difference maker. He was able to take advantage of the weakness to Psychic shared by a lot of Connor's Pokémon and emerge victorious, becoming the Senior Division World Champion. 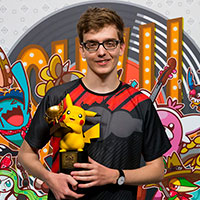 The Masters Division final was an interesting matchup between decorated player Robin Schulz of Germany and Canada's Jeff Kolenc, who was relatively new to the big stage in Pokémon TCG competitions. Robin was playing the Zoroark and Garbodor deck that was so prevalent this weekend, but with a couple of interesting twists, such as excluding Ultra Balls in favor of more Mysterious Treasure cards. Jeff was playing an interesting deck that relied on the Fighting-type Marshadow-GX and its Shadow Hunt Ability to use attacks from any Pokémon in the discard pile, such as Dawn Wings Necrozma-GX and Mewtwo-GX. With this setup, he could use Malamar's Psychic Recharge Ability to recover Psychic Energy while maintaining a type advantage over Zoroark-GX.

The first game reached top speed very quickly. In a flash, Robin had three Zoroark-GX on his Bench, giving him a lot of draw power thanks to three Trade Abilities, as well as a ton of damage potential with Riotous Beating. Jeff also set up well, with multiple Malamar and a valuable Marshadow-GX ready to go. But Robin's Garbodor was able to turn off Abilities with Garbotoxin, and Jeff couldn't find his Field Blower to negate the effect. Jeff searched for any way to make a comeback, but as the match wore on he simply couldn't get stay on the offensive. It took a while, but Robin ended up taking game 1 relatively comfortably.

The beginning of the second game gave everyone watching a sense of déjà vu. The first few rounds played out nearly identically to game 1, with Robin filling his Bench and enabling Garbotoxin quickly. But Jeff responded well, putting much better pressure on Robin with smart maneuvering via his Marshadow-GX and Lunala Prism Star. In the long run, though, Robin's talent and experience at this level of competition shined through—he managed to survive and eventually take the second game, earning him the title of Masters Division World Champion. 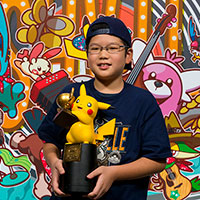 The first Pokémon VGC finals table featured two talented players from Japan. Wonn Lee and Sota Tamemasa met in the top cut at Japan's top competition earlier this year, so they were already familiar with each other's teams and styles.

Wonn's Terrakion dominated the first game, knocking out all four opposing Pokémon. Sota led with the popular combination of Mimikyu and Snorlax, but he was unable to get his Trick Room strategy rolling after Whimsicott's Beat Up and Terrakion's Z-Move Continental Crush knocked out Mimikyu on the first turn. Sota's team relies heavily on getting Trick Room enabled, so Wonn was able to close the battle easily after a decisive first turn.

Wonn changed his game plan early in the second round, but his adaptations backfired. This game, he opted for a knock out on Sota's Snorlax instead of Mimikyu, allowing the latter to activate Trick Room. Subsequently, Wonn's team proved extremely vulnerable to Sota's Mega Mawile, who ended the battle in short order.

Despite the different outcomes of the previous games, the players led with the same Pokémon in the final round as they had in the first two. This decisive game played out nearly identically to the first game, including Terrakion triggering its Z-Move against Mimikyu in the first turn. Sota's Snorlax was able to hold on a little longer in this match, but ultimately Terrakion's hard-hitting attacks gave Wonn the game and the championship. Wonn Lee is the Pokémon Video Game Junior Division World Champion! 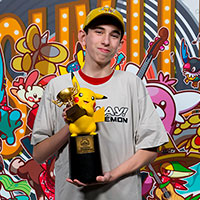 We got to see two decorated players go at it in the Senior Division finals, with James Evans and Bram de Jonge both having reached top cut in their share of big tournaments this season.

Bram's combination of Blaziken and Bisharp is known for winning or losing hard, and James was able to get the upper hand early in the first game by knocking out Bisharp and setting up Trick Room. Both players settled into a more tactical struggle as the battle progressed, exchanging Terrains with their Tapu and smartly predicting Protects at critical moments. James was ultimately able to capitalize on his early lead to earn a solid game 1 win.

Both Trainers sent out the same two Pokémon to begin the second game, but it got off to a wildly different start. James used Tapu Koko's Gigavolt Havoc Z-Move to knock out Blaziken before the latter was able to act, then Gardevoir started delivering waves of damage with Hyper Voice. After Bisharp shockingly knocked itself out with its own Life Orb, there wasn't much left for Bram to do. He was able to sneak in a Spore against James's Incineroar and buy himself some time, but James kept up the pressure and soon took the game, earning himself the title of Pokémon Video Game Senior Division World Champion! 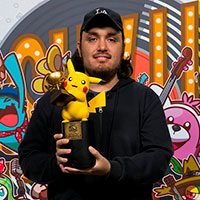 The crowd for the Masters Division finals was at full voice, wildly cheering on both players in equal numbers. Emilio Forbes might have been on his home turf in the United States, but Paul Ruiz had strong support from his friends and the many Latin American players in the audience.

The first game started out with some exciting moves. Paul triggered Gastrodon's Z-Move early, but Emilo's Gengar was able to endure it by setting up a Substitute. The early damage proved vital, as Paul was able to follow up by getting his Salamence to knock out Gengar early in the game. With Gengar off the field, Paul could bring in his Snorlax and not have to worry about its lack of attacks that could hit the Ghost-type Pokémon. All the while, both teams leaned heavily on Incineroar and its U-turn attack to trigger the Intimidate Ability repeatedly, keeping each other's physical attackers in check. Once Emilio's Incineroar was defeated and Paul's Snorlax was adequately powered up with Belly Drum, Emilio could see the writing on the wall and conceded the first game.

Emilio switched up his Pokémon at the start of game 2, going with Latias instead of Landorus. He also made brilliant moves to keep Gengar in the field and hold Snorlax in check. It even looked like he might be able to set up the combination of Perish Song and Shadow Tag for which his team was known. Just as it seemed Perish Song might give him the game, however, he had his low-HP Gengar use Substitute while Paul smartly had Incineroar use its Snarl attack. The sound-based move dealt damage through Substitute, knocking out Gengar and removing the trapping effect of Shadow Tag. After that, Paul was able to steamroll through Emilio's remaining Pokémon. With no route left to victory, Emilio once again conceded, making Paul Ruiz the new Pokémon Video Game Masters Division World Champion!

Once again, congratulations to our new World Champions and to everyone who played hard here in Nashville.

And look forward to the 2019 Pokémon World Championships, returning to Washington, D.C. next summer!