Day Two Is Complete in Nashville

See who will be competing for the title of Pokémon World Champion in tomorrow's final matches.

Saturdays at the Pokémon World Championships are always intense, and this year's was no exception. The Day 2 invitees joined the competitors who advanced from Day 1, meaning pretty much every matchup featured the best of the best. After a long day of battling, we're down to the final matches in both the Pokémon TCG and video game competitions.

All Pokémon TCG and video game finals will be shown live Sunday on Twitch.tv/Pokemon starting at 7:00 a.m. PDT.

See the tournament schedule for details.


Matches will run consecutively without break, so tune in to see who will be the next World Champions!

Here are your Pokémon TCG finalists:

Here are your Pokémon VGC finalists:

The entire Pokkén Tournament World Championships took place on Saturday, and the finals were truly a showcase of everything Pokkén Tournament DX has to offer. As always, both the Senior Division and Masters Division finals drew amazing crowds, and they would not be disappointed in the action. 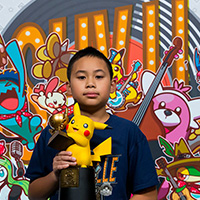 In the Senior Division, Kato from Japan squared off against Ashninja1 of the United States in a very tactical match. Few Pokémon were left on the bench as these talented battlers mixed up Pokémon and tactics in virtually every round. Kato entered from the winner's bracket while Ashninja1 came from the lower's bracket, meaning Ashninja1 would have to win two matches to become World Champion. He nearly forced a final match, but in a duel of Mewtwo vs. Mewtwo, Kato was able to hang on to become the Pokkén Tournament Senior Division World Champion! The Masters Division better have been paying attention, because these talented players are already incredible—and only going to get better. 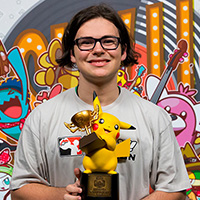 With the Senior Division finals over, it was the Masters' turn to battle. The grand final featured two Pokkén Tournament DX virtuosos: ThanksAlot from the United States and TARUTARO from Japan. ThanksAlot advanced from the winner's bracket, and started with his signature Sceptile. Out of the loser's bracket, TARUTARO began with Gengar. TARUTARO got out ahead, showing absolute mastery of his chosen Pokémon. After going down a couple games, ThanksAlot switched to Empoleon, hoping the Emperor Pokémon's projectiles could control Gengar when the latter took to the air. He fared slightly better, but it wasn't enough, and TARUTARO was able to reset the bracket and force a final match.

ThanksAlot switched back to Sceptile, the Pokémon that had previously carried him to victory all day long. It was a smart choice, but TARUTARO wasn't going down without a fight. At first, TARUTARO deftly handled everything ThanksAlot threw at him—there's no question that TARUTARO is the best Gengar player in the world. But ThanksAlot was nearly flawless down the stretch, and managed to eke past TARUTARO in an absolutely breathtaking match. Congratulations to Pokkén Tournament Masters Division World Champion ThanksAlot!

If the Pokémon TCG and video game finals are anything like what we saw on the Pokkén Tournament DX stage, we're in for an epic day. Remember to watch the Pokémon World Championships final matches tomorrow on Twitch.tv/Pokemon starting at 7:00 a.m. PDT.

Good luck to all of our finalists!