The final matches have concluded here at the 2017 Pokémon World Championships and the new Champions have been crowned! Before cheering fans here at the Anaheim Convention Center and online around the world, the best Pokémon TCG and video game players gave it their all to take home the title. 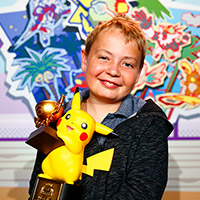 The Pokémon TCG competitors kicked off the action on Sunday morning, starting with the Junior Division. Tobias Strømdahl of Norway faced off against Minaki Hasegawa of Japan. Both competitors were playing Gardevoir-GX decks, an intriguing matchup where being overaggressive can prove extremely costly. This dynamic played out in the first game as the players traded big hits once the action heated up. Ultimately, Tobias managed to hold on in an exciting opening game.

He wasn't so lucky in the second game. Minaki was first to play and got off to a great start; Gardevoir-GX deck users prefer to go first because they can begin evolving quickly. After Tobias failed to get anything going, he conceded to give him plenty of time for the final game.

Tobias regained his footing in the third match, and was able to attack Minaki's Kirlia before they could fully evolve into Gardevoir-GX. The key to his match was wise use of the Guzma Supporter card to create favorable head-to-head matchups for his Pokémon. And in the end, Tobias managed to edge Minaki in a riveting match to become the Pokémon TCG Junior Division World Champion! 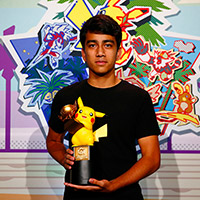 The awesome action continued as the Pokémon TCG Senior Division finalists Zachary Bokhari of the United States sat down across from Michael Long of Canada. This was a battle of Water-type Pokémon, with Zachary playing an Alolan Ninetales-GX deck and Michael playing his well-practiced Greninja BREAK deck. The big question going in was whether Zachary could use Giratina to limit the damage Michael could do with Greninja BREAK's Giant Water Shuriken Ability.

In the first match, Zachary was able to execute his game plan smoothly, getting Tapu Koko into play early to spread a little damage among all of Michael's Pokémon. With that done, he could bring up Alolan Ninetales-GX and use its Blizzard Edge attack to knock out Greninja BREAK in one shot, or KO weaker Benched Pokémon with the Ice Blade attack. Zachary had the magic touch in drawing Double Colorless Energy to keep up the onslaught seemingly every turn, and he eventually took the first match.

The second game was one of Sunday's most interesting . Zachary opened with a terrible opening hand, and had to discard it with Professor Sycamore on the first turn. By contrast, Michael was able to get running with an early Frogadier, getting his Bench in proper order right away. Zachary had to play catch-up with aggressive play, which meant a lot of cards hitting the discard pile via Professor Sycamore and Ultra Ball. But Michael was also down to few offensive options himself. In one of the most memorable moments of the tournament, Michael's Froakie used Bubble successfully in consecutive turns to cause Paralyze on Zachary's Active Pokémon. Unable to attack, retreat, or switch out, Zachary ran out of cards in his deck for a stunning game-two loss.

The decisive game three started very much in Zachary's favor, as two of Michael's valuable Frogadier were among his Prize cards. Michael played valiantly, staying in the match by using Super Rod and Rescue Stretcher to retrieve important Pokémon. But Zachary stayed aggressive and took the last game without conceding a single Prize card, earning himself the title of Pokémon TCG Senior Division World Champion. 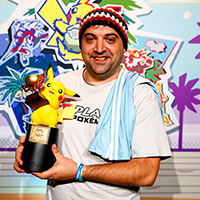 The Masters Division World Championship finals featured Diego Cassiraga of Argentina versus Naoto Suzuki of Japan, two players who demonstrate the best of what Pokémon TCG gameplay has to offer. Diego brought a Gardevoir-GX deck, while Naoto went with a Garbodor and Golisopod-GX deck. Beyond the decks being played, this was truly a battle of minds, with every decision made under utmost focus. The crowd was definitely in for a treat.

Opening the first game, Naoto was able to set his Bench up quickly, while Diego struggled to get going. Diego began with two of his Kirlia among his Prize cards, which meant he'd have to rely on Rare Candy to get his game going—something he doesn't want to do with Garbodor and Trashalanche lurking. But it was Naoto's other Garbodor, with Garbotoxin, that had a big impact on this game, shutting down Tapu Lele-GX's Wonder Tag and Gardevoir-GX's Secret Spring Abilities. Fortunately for Diego, a couple well-timed Field Blowers gave him the window he needed to eke out a victory in the first game.

The second game was more even, with neither player willing to go on the offensive too early. Despite the deliberate pace, fans were treated with the opportunity to watch two competitors at their top of their game. Throughout the tournament, these were players who very rarely made mistakes. The second game was notable once again for Naoto's Garbodor and its Garbotoxin Ability, this time affecting Diego's Octillery and the drawing power of its Abyssal Hand Ability. At the perfect moment, Diego drew a Field Blower off the top of his deck, allowing him to remove the Pokémon Tool card attached to Garbodor, and thus shutting off Garbotoxin. Diego then played N to get Naoto's hand down to a single card. Naoto didn't get the card he needed and was forced to pass, opening the door for Diego to become the new Pokémon TCG Masters Division World Champion! This is the third top-8 finish for Diego in the 13 years he has attended the Pokémon World Championships. 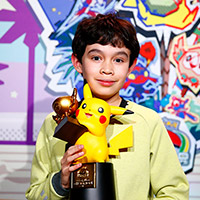 The Junior Division finals pitted Australia's Nicholas Kan against Spain's Tomás Serrano. Nicholas was a heavy favorite coming in—not only had he won the three previous International Championships, but his Championship Points total of 2310 this year absolutely dwarfed Tomás's 365. None of that mattered once the finals started, though; both Trainers needed to win just two of the three games in front of them to become World Champion.

Nicholas scored a key knock out on Tomás' Hariyama early in the first game with Gyarados' Supersonic Skystrike. Losing the Arm Thrust Pokémon so easily lost Tomás his best solution to Snorlax, but the duo of Oranguru and Gigalith battled back to give Tomás the advantage. Nicholas kept up his conservative play, however, and without Hariyama on the field Tomás was unable to break through Snorlax in the match's first game.

Tomás needed to make some adjustments to perform better in the second game, but the Pokémon prodigy Nicholas Kan showed off his impressive skills by making his own adaptations. Nicholas opted to use the Snorlax who won him game one as a decoy in game two. Instead of quickly defeating Tomás's Hariyama again, Nicholas allowed it to try to attack his Snorlax, which he withdrew and replaced with Gyarados. This enabled him to score a quick knockout on Oranguru before it could help Gigalith run wild the way it did in game one, and put him in an excellent position to take the match. 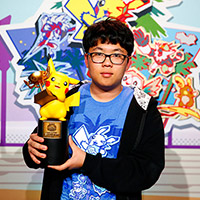 2016 World Championships Runner-Up Yuki Wata matched up against three-time Korean National Champion Hong Juyoung in a star-studded Senior Division final. This was a rematch of a quarterfinal bout at last year's World Championships—where Japan's Yuki Wata came out on top.

Juyoung's strategy focused on wearing down Yuki's Tapu Fini so that he could set up Trick Room with Porygon2 and go to town with his slowest attackers. He seemed to be succeeding in game one—aided by some misfired Muddy Water attacks—but Yuki's Kartana unexpectedly stuck around in Trick Room long enough to catch Juyoung's Mudsdale with a Leaf Blade, earning Yuki the first game.

Mudsdale and Tapu Fini continued to be key Pokémon for the remainder of the series. Yuki looked to find more ways to protect his Tapu Fini long enough to take care of Juyoung's Mudsdale, while Juyoung grew much more conservative about the risk to which he was willing to expose the Draft Horse Pokémon. The Senior Division finals was one of the closest matches we've ever seen, with both sides narrowly surviving attacks and making decisive predictions to gain advantages. 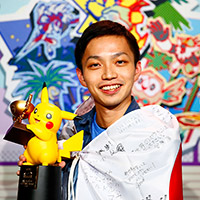 One of the key characteristics of Ryota's team is a wealth of Pokémon capable of dealing large bursts of damage, which can allow him to take advantages early in matches. Sam's Ninetales ensured his team would be able to stand up to Ryota's assault by setting up an Aurora Veil aided by Light Clay. Even though Ryota was able to dismiss Ninetales on the first turn of the game, it wasn't enough. Sam's Garchomp and Xurkitree were able to boost their stats under Aurora Veil's protection, setting up a decisive game one victory for the Australian.

The Japanese National Champion brought his Whimsicott in game two, giving him access to Tailwind so that he could match Sam's Mandibuzz. But it was Marowak's Brick Break attack that proved decisive for Ryota in Game Two. The Fighting-type move can break barriers like Ninetales' Aurora Veil, which allowed Ryota to break down Sam's primary strategy.

The third game opened with one of Pokémon's strangest interactions. Ryota attempted to use Z-Nature Power, a move that gains increased priority because of Whimsicott's Prankster Ability. Even though Z-Nature Power normally becomes Twinkle Tackle on Misty Terrain, a Dark-type Pokémon's immunity to moves enhanced by Prankster still applies. Whimsicott targetted Mandibuzz, so Ryota lost his Z-Move for nothing on the first turn of the match. Despite the early miscue, Ryota rallied, making for another unbelievable match.

Once again, congratulations to the 2017 World Champions, including our Pokkén Tournament World Champion Tonosama and Runner-Up Mikukey_HOMURA!

And look forward to the 2018 Pokémon World Championships, coming next summer to… Nashville, Tennessee! 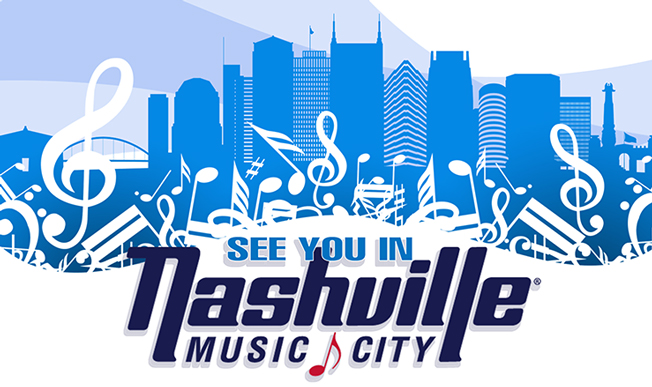