Throughout the Pokémon TCG Players Cup II, players have been putting their greatness on display as they battled it out with some of the best Pokémon Trainers from around the world. The Trainers who made it through the qualifying rounds found themselves in a double-elimination Region Finals bracket and a dream of making it to the final four players in their rating zone. Now we know who will compete in the Global Finals from North America, Europe, Latin America, and Oceania. The final 16 players will battle in one last double-elimination round to be crowned Players Cup II Champion, and it's not just bragging rights on the line: the Top 4 will also earn Travel Awards to a future event.

The broadcast for the Pokémon TCG Players Cup II will happen Dec 11–13 on Twitch.tv and YouTube, so you can watch a full slate of exciting action. After conquering the other competitors in their respective play areas, these are the players from each rating zone you might see:

Before the matches kick off, however, it's a good time to catch up on what it took for these players to reach this point, and what potential directions they'll take going forward.

During the Region Finals, 11 of our 16 qualifiers played three or more copies of the powerful Legendary Pokémon Zacian V, including 2017 World Champion Diego Cassiraga and 2019 Europe International Championships semifinalist Alex Silva. As a card, it is almost perfect—it has built-in Energy acceleration and card draw while being quite the heavy hitter in its own right. Eight players opted to pair Zacian V with Arceus & Dialga & Palkia-GX, which was also the overall favorite deck of the tournament. Altered Creation-GX speeds up the game immensely and forces your opponent to play safe or get punished with a Boss's Orders.

The other three players opted to pair Zacian V with Lucario & Melmetal-GX, which was both the first and second place deck of the inaugural Players Cup. It's basically the opposite of the Arceus & Dialga & Palkia-GX direction: Lucario & Melmetal-GX's Full Metal Wall-GX attack slows the game down considerably. The attack provides a buffer against the heavy-hitting Pokémon of the format, as well as a safety net in being able to discard all Energy from the opposing Pokémon. In combination with other cards like Metal Goggles and Mallow & Lana, Zacian V turns into a potent dual threat.

The popular opinion is that Arceus & Dialga & Palkia-GX / Zacian V is the best deck going into the Global Finals. It will be up to the players if they decide to go with the crowd, or try and take the formidable deck head-on. Centiskorch VMAX, with its added boost of consistency thanks to Talonflame V (more on that later), moves up in viability and is on a few of the players' radars as a solid choice to contend.

Several competitors have looked for logical counters among a field of Pokémon who are weak to Fire. While consistency is called into question when watching these decks perform at full power, they are nearly unstoppable with Centiskorch VMAX, in particular, lining up well against much of the format.

But it'll take more than leveraging Weakness, and the Fire-type decks have started to overcome their struggles in putting up consistent damage numbers. One such deck, which still shines despite losing cards to rotation such as Fiery Flint and Blacephalon-GX, is the Blacephalon deck piloted by Hugo Laperriere. It continues to persevere thanks to its talent for taking quick one-hit Knock Outs and only giving up one Prize card in return. Blacephalon is often limited by the amount of hand-disruption cards that opponents are willing to play, and Marnie and Reset Stamp increase that risk compared to other decks capitalizing on Welder. It's safe to say that as long as Zacian V sits atop the format, decks using Welder will have a decent chance at melting away some of that dominance.


Getting Past the Hype

Two decks that carried a lot of promise going into the Region Finals were yet again Pikachu & Zekrom-GX and Eternatus VMAX, but only one of each deck made the Global Finals. Eternatus VMAX made its debut during the first Pokémon Players Cup in exciting fashion with consistent, hard-hitting attacks and quality support Pokémon. The deck has run into a format that prioritizes Energy disruption as a counter for the top decks, so it catches a lot of the same troubles. The list piloted by Sam Clayfield uses Turbo Patch to try and mitigate that disadvantage, and opts for Power Plant to slow down opposing Dedenne-GX and find the time to get Dread End rolling.

Pikachu & Zekrom-GX has seen a resurgence in play during the Region Qualifiers and showed a bit of promise with multiple big-name players opting for the powerful TAG TEAM. Losing the overwhelmingly strong Thunder Mountain Prism Star to rotation slowed the deck down by a turn for the most part, but the addition of heavy hand disruption and the consistency of Dedenne-GX has helped keep the deck afloat in the format. Brent Tonisson, who finished 5th at the 2019 Europe International Championships and was the lone competitor to qualify for the Global Finals with Pikachu & Zekrom-GX, said he chose the deck for those exact reasons and that it allowed him to “steal” many games throughout the tournament.

A new expansion always brings fresh and exciting cards and strategies to any format. But the true testament to an expansion is how fast the cards shake up the hierarchy of the existing top decks. It will be worth watching the stream to see if cards from Sword & Shield—Vivid Voltage such as Coalossal VMAX, Orbeetle VMAX, and Whimsicott can make an instant impact in the Global Finals.

Both Pokémon VMAX show promise and could find their own spot in the format. Coalossal VMAX capitalizes on the increase of Fighting-type support. Being able to do up to 130 damage for one Fighting Energy could create a major advantage against decks like Eternatus VMAX and Pikachu & Zekrom-GX. 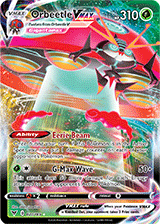 Orbeetle VMAX brings with it a powerful new Ability in Eerie Beam, able to spread 10 damage to each of your opponent's Pokémon for each Orbeetle VMAX you can rotate into the Active Spot. Orbeetle VMAX's Fire-type Weakness might keep it on the sidelines for now, although that same Weakness hasn't slowed down Zacian V much.

Whimsicott is a very intriguing Pokémon, as the format has recently lacked a consistent single-Prize attacker other than Blacephalon. Its Flying Fury attack costs just one Psychic Energy and does 10 damage plus 40 for each Pokémon Tool you discard from all of your Pokémon. This means with a full Bench, Whimsicott could do conceivably do 240 damage—hard to pull off, but a fascinating thought to say the least.

Sword & Shield—Vivid Voltage also introduces some new key support Pokémon into the format. The new Amazing Jirachi seems, well, amazing. Jirachi with the Stellar Wish Ability was an instant staple of many decks and saw a variety of uses. But the rotation of Escape Board limited the flexibility of the powerful Basic Pokémon, so decks had to focus more on ways to get out of the Active Spot with cards like Switch and Scoop Up Net. The new Jirachi's Ability provides a similar function to Stellar Wish: Dreamy Revelation lets you look at the top two cards of your deck and put one into your hand (the other one stays on top of the deck). This new Ability is definitely not as powerful as digging five cards deep and shuffling, but since it also doesn't make Jirachi fall Asleep afterward, it does offer more flexibility in deck-building since you don't have to commit extra spots to its utility. It'll be interesting to see if the new Jirachi overtakes the spot in a lot of the decks going forward. 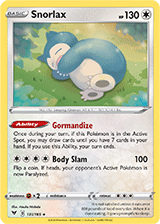 Snorlax is another Pokémon that can draw cards, but its Gormandize Ability stands out as a sort of one-sided Tropical Beach, an older Stadium card that allows you to draw until you have seven cards in hand but also ends your turn. This effect has given rise to a number of different archetypes and control strategies in the Expanded format; only time will tell if someone cracks the code for Snorlax in the Standard format.

One more card that could swoop in to help a deck in need of some added consistency is Talonflame V. We mentioned it earlier as a strong potential partner to Centiskorch VMAX. Its Fast Flight attack allows you to discard your hand and draw six new cards, even on the first turn of the game. This in combination with free retreat and a serviceable attack to Knock Out opposing Dedenne-GX provides great utility to any Welder-focused deck, as most of those decks struggled when going first in some of their matchups.

The early consensus is that support Pokémon like these are the stars of the new expansion and show the most promise to impact the 16-player Global Finals. The new cards bring the temptation to use them, and the question becomes: how far off the expected plan are players willing to go? These cards are largely untested, so for a lot of players, that decision will come down to confidence. Players often resort back to the basics when approaching a new format, but for some this is an exciting opportunity to shake up the field of proven archetypes. Whether it will work is certainly worth tuning in to the stream.

Whatever deck these 16 players choose to bring to the Global Finals will drastically change the landscape of the bracket. Players are allowed to change their decks before this round, so it will be exciting what Pokémon each competitor turns over to start the match. For example, in the first Pokémon Players Cup, Natalie Millar and Matthew Burris controlled the flow of the tournament with Lucario & Melmetal-GX, which has found its own slice of the metagame pie. One has to wonder whether the competitors in this event will follow that lead or test the waters with a new deck. And now with the new Sword & Shield—Vivid Voltage expansion legal, what new surprises await our Trainers?

Find out what new cards make the most impact, and be sure to check out all the action for the Global Finals at Twitch.tv/Pokemon and YouTube.com/Pokemon streaming Dec 11–13. 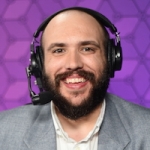 Jeremy Jallen
Jeremy is a Pokémon TCG competitor and commentator who has been involved in the game since 2008. Among his best finishes are Top 8 in the 2011 World Championships, and a 1st and 2nd place finish at Regional Championships. Nowadays, you can catch Jeremy casting Pokémon TCG matches from the commentary booth with a Pokémon pin on the lapel and puns at the ready. He has also been told by several people that he owns the cutest pug.