A Frantic Friday at the VGC North American International Championships

Trainers needed to finish with a record of seven wins and two losses or better to keep their dreams alive and move on to Saturday, leaving little room for error. Coming out on top against the top Trainers in North America would be challenge enough, but this year the difficulty ramped up to eleven. Not only were the host region's best Trainers competing, but the top players from Europe, Oceania, and Latin America showed up as well—and they proved to be more than a match for many of the domestic competitors.

The first day of play in Indianapolis featured exciting battles, bold team choices, inspiring victories, and heartbreaking defeats. After nine rounds of play, the field of almost 400 players was cut down to 36. Trainers from each rating zone moved on to Saturday, including representatives from Argentina, Australia, Chile, Germany, Mexico, Italy, and Sweden. Battles will resume Saturday morning around 9:00 a.m. Eastern Daylight Time, so be sure to tune in. The standings are available online, so don't forget to check out how your favorite Trainers fared and follow along tomorrow to see if they're still in the competition. 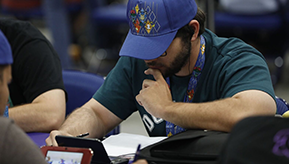 Let's revisit some of the day's most memorable moments as Trainers competed for prizes, glory, and of course, cool hats.

What was perhaps Friday's most memorable battle came early in the day. The third round featured a stunning match between America's most famous Eevee Trainer, Giovanni Costa, and Tobias Koschitzki, one of Germany's most skilled and accomplished Trainers. Giovanni won the first game of the set, but he was soundly defeated in the second, and Tobias seemed to have the third well in hand. But Giovanni and his lone Dragonite couldn't be defeated so easily. Much to the delight of the local crowd, the dynamite Dragon-type swept through all four of its remaining opponents, pulling off one of the most shocking victories the Video Game Championships has ever seen. 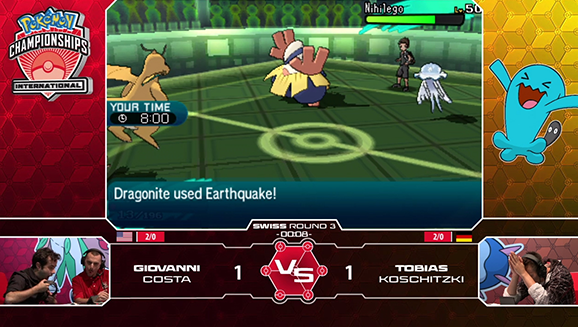 Unfortunately, Giovanni wasn't able to move on to Day Two despite an impressive 3-0 start, but you can view his team here, as well as the teams of some other impressive Trainers who couldn't quite break through this time.

Giovanni wasn't the only famous Trainer to fall a bit short. Reigning World Champion Wolfe Glick dropped out of contention early in the day, continuing a surprising streak of early summer troubles. Many Trainers who made it to the top-8 of previous International Championships also failed to make the cut for Day Two this time, including Tommy Cooleen and Ben Kyriakou. And several of the most heralded North American Trainers missed the bar, as well, including part-time commentator Aaron Zheng. With so many of the game's strongest Trainers failing to move on, one thing was clear—this field was tough.

Few Pokémon had the same level of impact on today's matches as the Sleeping Pokémon, Snorlax. The drowsy behemoth kept spectators wide awake by dishing out massive damage with attacks empowered by the risky Belly Drum. All of the Snorlax we saw compete on today's livestream held a Berry that could restore its bountiful HP, making it a tough Pokémon to topple.

Expect to see Snorlax continue to be a major player as the tournament continues. Few Pokémon can compare to its mix of offensive and defensive strength, and there are very few Fighting-type Pokémon remaining to stop it.

The Weakness Policy item is one of the more intriguing items in the Pokémon video games. Pokémon holding this unique item gain two levels of Attack and Special Attack when hit by a super effective attack—one of the most powerful effects of any held item. But Weakness Policy is also one of the riskiest held items available due to the threat of super effective attacks simply knocking out the Pokémon holding it instead—not to mention the possibility the item will never come into play at all.

We saw several Trainers give their Metagross a Weakness Policy to hold, and they used a strategy that ensured they weren't leaving its activation up to chance. In a twist on a strategy we saw earlier in the season, these Trainers paired their Metagross with a Salamence that knew the move Bulldoze. Not only does Bulldoze activate Metagross' Weakness Policy without dealing much damage to it, but Bulldoze also slows down each opponent hit by the attack while Metagross remains unaffected due to its Clear Body Ability. Few Trainers seemed to be prepared for the resurgence of this strategy, and even fewer were preparing for Metagross and Salamence individually.

Running of the Bulu

Tapu Bulu has been one of the most vigorously debated Pokémon all season long. Players seem split—is Tapu Bulu the weakest Tapu, or is it an undervalued Pokémon poised to help a Trainer win one of the summer's biggest competitions? The hype some Trainers built around Tapu Bulu wound up not just being a bunch of bul-oney on Friday, as more successful teams featured the guardian of Ula'ula Island than any previous event.

Tapu Bulu is not the sort of Pokémon that is ever going to reach the level of usage Tapu Koko, Garchomp, or Arcanine enjoy, but we'll reinforce one more time that it's a Pokémon worth watching out for. Grassy Terrain is extremely powerful—it greatly reduces Garchomp's impact in battle, and the healing it provides can allow some Pokémon to endure an extra hit before being knocked out. What's more, its damage boost to Grass-type attacks causes Tapu Bulu to deal devastating damage, even if it isn't trained in Attack. With both Tapu Lele and Tapu Fini fading a little on Friday compared to previous International Championships, Tapu Bulu may finally be poised to win its first International crown.

Two days of play remain in Indianapolis, and we're still left with many questions. Will Celesteela continue to appear more frequently than Kartana at the top tables? Will the tournament be won by an unconventional form of speed control, such as Salamence's Bulldoze or Ninetales' Icy Wind? Is North America really going to fail to defend its own International Championship? You'll have to tune in to the livestream at Pokemon.com/Live as battles continue Saturday and Sunday to find out!

And as always, remember to keep checking back to Pokemon.com/Strategy for more Pokémon TCG and video game tips, strategies, and tournament coverage.