Recapping a Wild Day One at the North American Internationals

Competitors from around the world have come to Indy with an astounding variety of powerful decks.

It's been a torrential first day here in Indianapolis at the Pokémon TCG North American International Championships, with massive rain and thunderstorms outside adding to the drama inside the Indiana Convention Center. All Pokémon TCG divisions began their action today, with over 1,700 competitors—including over 1,300 Masters Division players—battling to become the first North American International Champion. Coupled with the strong turnout on the video game side, this event set a new record as the largest live Pokémon competition in history. 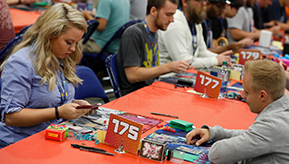 The Pokémon TCG community seems to be aware of the momentous occasion of this year's event, and not just for its sheer size. It's a who's who of Pokémon TCG veterans, including a number of prominent players returning after absences from recent major competitions. Perhaps it's the great prize pool, or the opportunity to earn those last precious Championship Points toward a World Championships invitation, or just a chance to play against such a remarkable field, but all the big-time players are showing up to give it their all.

From a gameplay perspective, the talk of the tournament has to be all of the different decks that players are bringing to bear. It's the most diverse metagame in recent history, and no deck has truly emerged as a frontrunner. The livestream on Pokemon.com/Live has been a treat for spectators to see the wide range of great players and potentially excellent decks.

Before diving into individual decks, it should be noted that Tapu Lele-GX has been everywhere—and for good reason. The Wonder Tag Ability that allows its player to fetch a Supporter card is so great it's almost easy to overlook how powerful the card's Energy Drive attack is, too. Tapu Lele-GX has perhaps contributed to the diminishing role of Shaymin-EX, whose Set Up Ability was a staple for many decks throughout the 2017 Championship Series season. Beyond having a stronger attack than Shaymin-EX, Tapu Lele-GX also has higher HP, making it much tougher for your opponent to target for two easy Prize Cards. 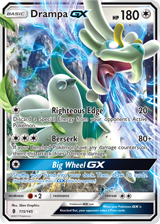 Many of the decks that we predicted to be prominent this weekend have indeed shown up in force. Zoroark BREAK decks backed by Drampa-GX (and sometimes Oricorio) have seen plenty of action. With its Foul Play attack, Zoroark BREAK can reflect the power of any of its opposing Pokémon. That makes it a great choice to go toe-to-toe with Pokémon-EX and Pokémon-GX—it will give up only one Prize Card if it's knocked out, while claiming two against these big foes. It's a tough card to play because it relies so much on the actions of your opponent, but the talented competitors here are showing the world how it's done.

Zoroark isn't the only Darkness-type Pokémon to worry about—Yveltal and Darkrai-EX decks continue to hold their own despite players having plenty of time to figure out how to take them down. Darkrai-EX is terrifying when it gets rolling, with its Dark Head attack getting stronger as Darkness Energy flows onto your party. Max Elixir has played a huge role in getting Energy out—its advantage is that you can play it on the same turn as you played an Energy from your hand.

The recently introduced Fighting-type Pokémon Lycanroc-GX has also come on strong lately. It and Zygarde-EX create a one-two punch, with Lycanroc-GX's Bloodthirsty Eyes Ability choosing the target and Zygarde-EX's multiple attacks delivering blow after blow. This might not be the most common deck in the field, but it's certainly getting positive results. 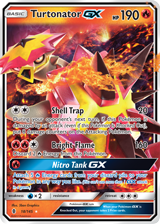 Volcanion and Volcanion-EX have also burned bright here, fueled by the recently released Turtonator-GX from the Sun & Moon—Guardians Rising expansion. Turtonator-GX's Nitro Tank-GX attack has been essential to the keeping this deck hot, giving Volcanion the Energy it needs to keep the fires going. Anyone who caught Ryan Sabelhaus's two winning appearances on the livestream know just how effective this deck can really be.

There was little question that Decidueye-GX would see lot of action in Indy. What's intriguing is how players have taken the Pokémon in two directions. Some players have opted to pair the Pokémon with the Tapu Koko promo card, while others have leaned toward the Alolan Ninetales-GX. Both are effective at damaging your opponent's Bench in different ways, making them an excellent complement to the Decidueye-GX's Feather Arrow Ability. 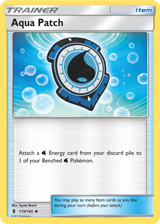 Two decks that simply won't wash away are the Water Box and Greninja BREAK decks. Water Box decks have stayed afloat with help from Lapras-GX, Manaphy, and Alolan Ninetales, and have been given a huge boost by the Aqua Patch Trainer card in the Sun & Moon—Guardians Rising expansion. Greninja BREAK keeps doing what it's doing with the usual help from Splash Energy and cards such as Fisherman to keep the Energy flowing. Both of these Water-type decks have managed to resist the changing tides of the Pokémon TCG metagame.

Similarly, the Legendary Pokémon Xerneas has continued to keep Fairy-type Pokémon in the mix long after it was introduced back in the XY expansion. Its Geomancy attack has been powering up Benched Pokémon for going on three years. We've seen Xerneas anchor a variety of decks, including as the base for Xerneas BREAK, as well as in support of both Gardevoir and Mega Gardevoir-EX. Players have been ingenious in the ways they have continued to find ways to win with Xerneas.

On the other hand, some decks have faded a little bit from the metagame quicker than expected. Garbodor and its nasty Trashalanche attack are certainly present in Indy, but maybe not quite in the numbers we were expecting. One theory is that players are more mindful of its ways and have begun to include fewer Item cards in their decks, which subsequently makes Garbodor less powerful. Its Psychic-type Weakness could also be a contributing factor as more players use Tapu Lele-GX in an offensive role. Either way, the Pokémon is still incredibly strong, but in the current metagame it has taken a bit of a hit.

Vespiquen and Metagross-GX decks have also fallen by the wayside, and again, the rise of a bad type matchup could be the cause. Both of these Pokémon suffer from the same Fire-type Weakness, and as Volcanion ascends in the metagame, these are the decks taking the biggest hit. It seems that players anticipated this shift, as not only are there not a lot of these decks among the top players, but we're not seeing much of them overall. 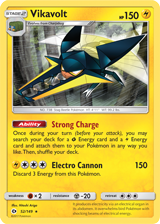 One deck that we didn't mention in our preview but has had a pretty great run in Regionals competitions is led by the Stage-2 Vikavolt. Players have begun using Vikavolt's Strong Charge Ability to get Energy onto Tapu Bulu-GX to maximize the value of the latter's Nature's Judgment attack. Tapu Koko and Drampa-GX, both with attacks that require only Colorless Energy, are often found alongside Vikavolt, too. It's not very often that a Stage-2 Pokémon is used almost exclusively as a support Pokémon, especially to the extent that Vikavolt is—truly a testament to the value of Strong Charge.

The extraordinary players and unbelievable metagame has already made this International Championships one for the ages, and we're only through Day One. After today, only the players with two or fewer losses will move on to Day Two, where the action is sure to be even more intense. At this point it's anyone's ballgame, which should make for an epic Saturday.

Remember to watch Pokémon TCG and video game matches live from Indianapolis throughout the weekend at Pokemon.com/Live all the way through the finals!