Look back on the results and see what strategies found the most success.

With the Autumn Regional Championships behind us, the 2016 Play! Pokémon season is well under way. Heading into these events, players weren't sure what to expect from the wide array of cards available in the Expanded format. Let's look back on the results and break down what strategies found the most success.

Dark Patch has returned to prominence in the Expanded format, and that means Yveltal-EX and Darkrai-EX are also back to their winning ways. Nine decks featuring these Darkness-type powerhouses finished in the top cut of the Masters Division events during the Autumn Regionals, surpassing any other deck. Other strategies that started strong faded away by the end of Regionals, but this one remained successful across all three weekends. Israel Sosa used it to win in Phoenix, and Frank Diaz went on an incredible run by taking 2nd in Lancaster, PA, and 1st in Fort Wayne, IN. In fact, Frank used the same 60-card deck in both of his great finishes—a true testament to both his skill and the strength of Yveltal-EX and Darkrai­-EX. 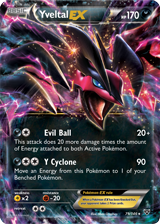 The success of Yveltal-EX, Darkrai-EX, and Dark Patch has led many players to believe that the combination is capable of defeating anything, attributing its success to flexibility against a wide range of decks. For example, Yveltal-EX is the primary attacker, but its Weakness makes it frail against Lightning-type Pokémon. Against a strong Lightning-type Pokémon such as Raichu, players can switch to attacking with Darkrai-EX instead. Seismitoad-EX can also jump in at any point to disrupt the opponent with Quaking Punch, and the non-EX Yveltal is a bulky Pokémon that some decks struggle to deal with. The end result is a proven, well-rounded deck with the tools to win tournaments, one that many veteran players are comfortable using.

If you want to see this deck in action, check out the Finals from the Fort Wayne Regional Championships.

Water-type Pokémon have had a lot of success recently in the Pokémon TCG, and that continued at the Autumn Regional Championships. As we covered in our Week 1 analysis, the Blastoise deck that won the 2015 World Championships Masters Division continued its winning ways at the start of the 2016 season. During the first weekend, this deck reached the Top 8 in the Masters Division six times, the best showing of any deck. All signs pointed to Keldeo-EX continuing to lead players to victory with Secret Sword. 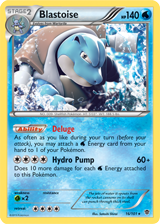 However, over the next two weekends of Autumn Regionals competition, only one Blastoise deck managed to make Top 8. Many players considered this the deck to beat, so they countered it in various ways. The simplest method was to use Hex Maniac to stop Blastoise's Deluge Ability, shutting down the deck's key strategy. Others opted to use Wobbuffet or Garbodor as alternate ways to stop this Ability. But probably the biggest reason for Blastoise's decline was the rise of Vespiquen decks. Blastoise decks usually rely on Keldeo-EX to attack, and Keldeo-EX's Weakness to the Grass-type Vespiquen is devastating.

Decks focusing on Seismitoad-EX's Quaking Punch continued to be powerful, with seven of them finishing in the Top 8 of the Masters Division at Autumn Regionals. What's more impressive is the quality of these finishes—four Seismitoad-EX decks made it to the Finals, and two of those took home 1st place. Giratina-EX was the most commonly seen partner for Seismitoad-EX, but Michael Pramawat and Mark Garcia both used Crobat (XY4 PHF #33) as a sidekick in their Regionals wins. One player even used Genesect-EX (BW10 PLB #11) as an alternate attacker. With so many viable variations, Seismitoad-EX continues to be successful in the Expanded format, in large part due to the added damage output from Hypnotoxic Laser. Shutting down an opponent's Item cards with Quaking Punch is always disruptive, and it's a proven tournament-winning strategy.

Decks featuring Vespiquen had no Top 8 finishes in the Masters Division during the first week of Autumn Regionals, presumably because players feared Archeops and its Ancient Power Ability. But as the usage of Archeops dwindled, Vespiquen came roaring back in the next two weeks with six Top 8 finishes. The most buzzworthy event was Jimmy O'Brien's undefeated run through the Lancaster Regionals, racking up an unprecedented record of 16 wins, 0 losses, and 1 draw over two days of competition. After that, it was clear that this deck was a top contender. 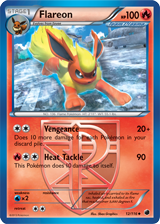 The deck aims to use Battle Compressor to discard Pokémon, powering up Vespiquen's Bee Revenge attack for big one-hit Knock Outs. Flareon's Vengeance attack is identical to Bee Revenge, so players have two attacking Pokémon that use the same strategy. Flareon has an added bonus: it's a Fire-type Pokémon, so it can take advantage of Blacksmith. With so many players using Enhanced Hammer to discard Double Colorless Energy, being able to recover Energy with Blacksmith is invaluable.

The most powerful aspect of this deck is that it doesn't rely on Pokémon-EX to attack. Since Bee Revenge and Vengeance can do enough damage to take down Pokémon-EX in one attack, players can create favorable 2-for-1 exchanges in Prize cards. It's not unusual to see Vespiquen and Flareon attacking for 170 or 180 damage consistently, making this strategy disastrous against any deck that relies too heavily on Pokémon-EX. Without a doubt, this is one of the decks to beat in the Expanded format.

After taking 2nd place with a Blastoise deck at the Phoenix Regional Championships, Jonathan Paranada continued his success by winning the Regional Championships in Vancouver, BC. But this time around, he used a new deck featuring Tyrantrum-EX. Players first heard of this deck when it took 9th place at the Lancaster Regional Championships, but this big win proved that Tyrantrum-EX is a legitimate threat. Its Dragon Impact attack hits for 190 damage, which is enough to take down most Pokémon-EX in one attack. Add in Muscle Band and Faded Town, and even most Mega Evolution Pokémon can be taken down with ease. 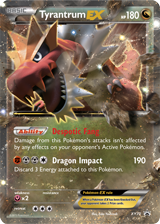 Tyrantrum-EX's biggest weakness is its massive attack cost. Dragon Impact requires 4 Energy to use, and you have to discard 3 Energy with each attack. Bronzong's Metal Links Ability is the easiest solution to that problem, allowing players to recover that discarded Metal Energy and power up faster. Double Dragon Energy also helps with the difficult Energy requirements and allows players to use Giratina-EX's Chaos Wheel attack as an alternate option. With the raw power of Tyrantrum-EX and the disruption of Giratina-EX, this new strategy is incredibly powerful.

Several other strategies managed to make the Top 8 in the Masters Division at the Autumn Regional Championships, including Mega Rayquaza-EX, Mega Manectric-EX, and Primal Groudon-EX. Other familiar faces like Donphan and the Night March deck also made appearances, and a lockdown deck with Sableye and Garbodor found a little success as well. In total, more than 10 different kinds of decks made the Top 8 of the Masters Division during Autumn Regional Championships, which speaks to the diversity of viable strategies in the Expanded format.

The Autumn Regional Championships were an exciting way to kick off the 2016 Play! Pokémon season, but they're only the beginning. The newest expansion, XY—BREAKthrough, is on the horizon. With brand-new cards and the exciting arrival of Pokémon BREAK, new strategies and card combinations will keep the Expanded format fresh and unpredictable. Who knows what the next big deck will be?

At the end of November, City Championships will begin. Don't miss your chance to attend these events and earn Championship Points to work toward an invitation to the 2016 World Championships! These tournaments can use either the Standard or the Expanded format, so players will have to be prepared. Stay tuned to Pokemon.com/strategy for a preview of the upcoming City Championships and much more!