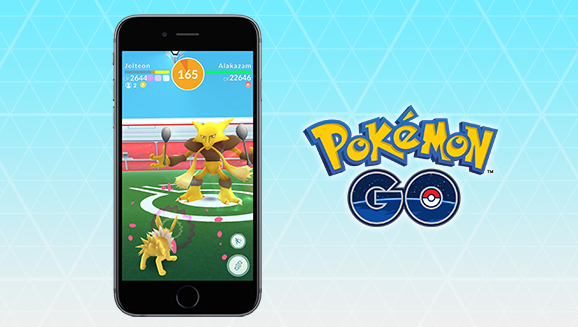 Raid Battles in Pokémon GO are sure to make your real-world adventures more exciting than ever. They're especially noteworthy if you're looking to complete your Pokédex—Raid Battles are the only way to capture some of the rarest Pokémon, including Legendary Pokémon. They're the exclusive source for earning Rare Candies, Golden Razz Berries, and TMs, too.

You'll get more Premier Balls to capture Legendary Pokémon and other Raid Bosses if any of the following is true: a) your Pokémon deal significant damage against them in battle; b) your team made substantial progress in defeating them; or c) your team controls the Gym at which the battle took place.

If you want to have the best chance to capture the rarest Pokémon, you'll need a powerful team. With a little work, your Pokémon will be well on their way toward becoming the very best.

The most important part of training Pokémon in Pokémon GO is selecting which ones you'd like to power up.

It takes a lot of Stardust and Candy to power up your Pokémon, so select which ones you train carefully. Some Trainers choose to power up Pokémon that are important to them for sentimental reasons, such as being the first Pokémon they captured. Others focus on the Pokémon's potential by selecting particularly powerful members of sought-after species. Whatever your philosophy, you'll perform best in battle if you focus on a handful of Pokémon.

Your goal in a Raid Battle is not just to survive, but to deal as much damage as possible as quickly as possible. That makes Pokémon like Tyranitar, Dragonite, and Machamp king, while Pokémon that have tons of HP but deal damage slowly—like Blissey and Snorlax—are best avoided. It's also useful to collect a variety of Pokémon—taking advantage of your opponent's weakness will allow you to deal more damage than you would by simply using Pokémon with high CP. Instead of just training a bunch of Dragonite and Tyranitar, power up Pokémon like Exeggutor, Flareon, Jolteon, Rhydon, and Vaporeon to increase the number of types at your disposal.

Before you start using Stardust and Candy, have your team leader appraise your Pokémon to find out how it compares to other Pokémon of its species. If your Pokémon is “breathtaking,” if it can “accomplish anything,” or if it can “really battle with the best of them,” you have a champ in the making. If you're told anything else, consider holding out for another Pokémon of your chosen species. Training takes a lot of Stardust and Candy—don't rush to spend those valuable items on a Pokémon you may soon want to replace.

It can likewise be helpful to start with Pokémon that are already powerful, allowing you to cut down on how much Stardust and Candy you need to invest. Don't worry too much about your Pokémon's starting CP, but if the marker on the half-circle graph above your Pokémon's image on its summary isn't very full, it will take a lot of Stardust to achieve its maximum power. Captured Raid Bosses and Pokémon hatched from Eggs are higher level than most wild Pokémon, and are particularly powerful members of their species. They make for great partners if you're not sure where to start.


Power Up for Battle

Once you've chosen a Pokémon to train, you can power it up from its Pokémon summary. But as we've mentioned, you'll need two resources: Candy and Stardust.

Candy is specific to each Pokémon Evolution line and can be obtained by catching, hatching, or transferring any Pokémon in the corresponding line. For instance, you could gain Machop Candy by capturing a Machoke, then use that Candy to power up your Machamp. You can get even more Candy by making the Pokémon you want to power up your Buddy Pokémon and then walking around with it. And if you're extraordinarily lucky, you can sometimes get Candy by feeding Berries to Pokémon defending allied Gyms. Finally, Rare Candy earned from defeated Raid Bosses can be used on a Pokémon and turned into that Pokémon's Candy.

Unlike Candy, any Stardust you acquire can be used when powering up any Pokémon in your collection. You'll receive some Stardust whenever you capture a Pokémon or hatch an Egg. You'll score even more Stardust and Candy when you capture an evolved Pokémon, so don't ignore those Pidgeot and Beedrill, even if you're not looking to use them in battle. You can also gain Stardust quickly by feeding Berries to Pokémon in allied Gyms.

Your Pokémon will be quite formidable after you power up their CP and HP, but one key element remains—their attacks.

You can change your Pokémon's attacks using TMs—special items you'll sometimes earn by completing Raid Battles. Each Pokémon knows one Fast Attack and one Charged Attack from a selection its species can learn. Using a TM on your Pokémon will cause it to learn a different attack from that pool. For instance, if your Tyranitar knows Fire Blast, giving it a Charged TM would cause it to learn Crunch or Stone Edge.

TMs can be critical to helping your Pokémon take advantage of type matchups. For example, Golem is always a great choice against Charizard defensively, but if it knows the Ground-type attacks Mud-Slap and Earthquake, it's not going to be very effective on offense. If you were to use TMs to teach the same Golem the Rock-type moves Rock Throw and Stone Edge instead, the attacks would be super effective. Try collecting Pokémon from the types Raid Bosses are weak to, and then use your TMs to help maximize their potential against those bosses.

Training a team of powerful Pokémon is hard work, but the results will speak for themselves when you see how much damage your Pokémon can deal in battle. Enjoy taking over Gyms and defeating the toughest Raid Bosses with your superpowered Pokémon! And remember to check back at Pokemon.co.uk/Strategy for more Pokémon GO, video game, and Pokémon TCG tips.