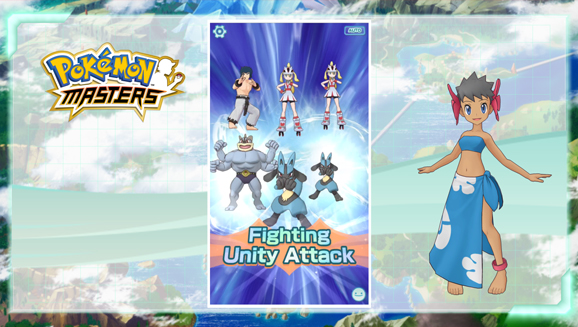 Pokémon Masters starts off with some easy battles, but you'll need some seriously clever strategies if you're looking to defeat the toughest foes. The battles on Pasio can also be pretty dynamic and have a lot of variety. You'll find the best strategies for single-player battles are a little different from those that work best in co-op battles. The key to victory is selecting the right sync moves and making the most of sync moves and unity attacks.

If you're looking to prove you're the best of the best, read on for some tips and strategies for both single-player and co-op battles. And if you're just getting started in Pokémon Masters, first make sure to check out our introductory tips and guide to training sync pairs. 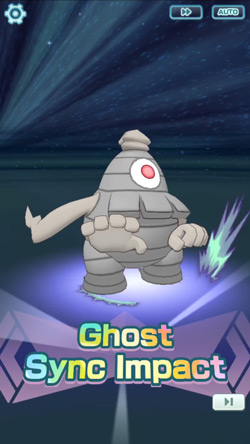 Sync moves are a key element of battles in Pokémon Masters. After performing several actions to charge up your sync move, you can have one of your Pokémon unleash a powerful attack that usually does a lot of damage. These attacks even give your whole team a buff.

While sync moves are an important part of both single-player and co-op battles, they should be an even larger focus of your strategy when you're playing by yourself. Unlike in co-op battles, where you take a similar number of actions as your teammates and the opposing team, in single-player battles, you have all three of your own sync pairs in battle at once. This readies your sync move much more quickly because you take far more actions.

Spend the turns leading up to your sync move by using lots of Trainer moves. Most Trainer moves don't deplete the move gauge, so you can charge your sync move much more quickly with them than by using only Pokémon attacks. Plus, you can use Trainer moves to increase the stats of the sync pair you intend to use the sync move. Many players base their single-player strategy on this principle and compose squads featuring one attacking sync pair and two support sync pairs. 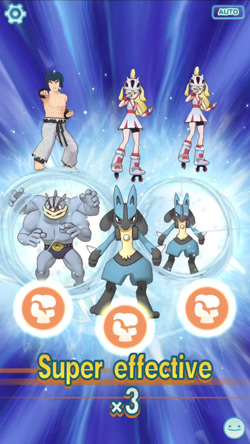 Your sync move will charge much more slowly in co-op battles, so you'll almost never be able to charge up a sync move before your opponent does. Fortunately, co-op battles also introduce new weapons, and they're the key to success against hard opponents: unity attacks. To take down the most powerful opponents, it's critical to fire a lot of unity attacks. Prioritize charging the unity gauge over almost everything else.

A unity attack is an extremely powerful attack against all opponents by all three allied sync pairs combined, but you have to work together to trigger it. The unity gauge fills up when sync pairs from your team continuously attack without the opponent making a move, and unlike with charging your sync move, Trainer moves won't help at all. The unity gauge charges slowly by default, but there's one trick to keep in mind. When all three allied sync pairs attack an opponent without the opponent attacking in return, a unity bonus is activated for a short time. When the unity bonus is in effect, your team's damage against the opponent increases and any ally's attack fills the unity gauge. By working together to activate unity bonuses, you'll deal far more damage than you would by having sync pairs act independently.

A popular strategy is to use two or three stat-increasing Trainer moves and then attack each turn until the opponent's sync move. Doing this often allows for your team to use one or two unity attacks before your opponent can use a sync move, and it gives you time for your move gauge to build up so you don't run out of steam as soon as the unity bonus starts. You'll almost always do more damage this way than you would if you spent more turns increasing your stats, especially since you usually get to use fewer moves between your opponents' sync moves than you do in single-player.


Defend against Your Opponent's Attacks 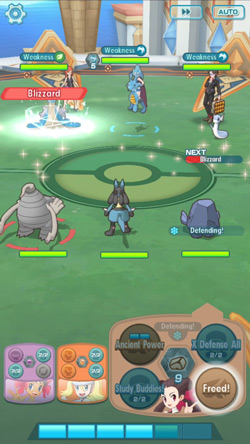 Your opponents aren't just going to sit around and let you launch powerful sync moves or unity attacks uncontested, so it's important you do what you can to control incoming damage. Fortunately, there are some tricks to limiting incoming damage, but what you'll need to do is a little different in single-player and co-op.

Opponents in co-op battles are a little different. They won't be so easy to mislead early in battle, but you may notice that the same opponent will try to execute similar strategies each time you fight them. You can take advantage of this by making sure you have the right Pokémon on the field at the right time to use defensive moves like Roxanne & Nosepass's Wide Guard and Marley & Arcanine's We're Standing Strong!

You can gain even more control in co-op battles once your sync move is ready. Using a sync move will immediately make the attacking sync pair the target of your opponents' upcoming moves. Instead of having your attacking sync pairs fire off sync moves thoughtlessly, it's important to use a more defensive sync pair to pull attacks away by using a sync move of its own. Even though a sync pair like Rosa & Snivy won't do as much damage with its sync move as a more offensive sync pair like Brendan & Treecko would, using sync moves this way gives sync pairs that can deal damage more time to attack without being targeted. Particularly well-coordinated teams can even have two strike sync pairs use their sync moves and then immediately follow those with a support sync pair's sync move, completely negating the drawback of having a frailer sync pair use its sync move! 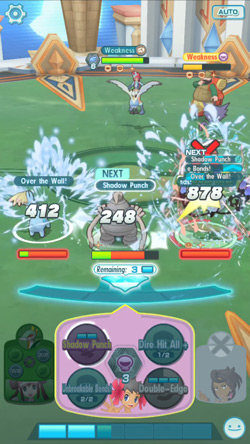 Opponents' sync moves are extremely dangerous in both single-player and co-op battles because their sync moves will damage all three of your sync pairs.

Avoiding sync moves is particularly interesting in co-op battles because only the sync pairs you and your teammates have active on the field will take damage. If you queue one sync pair to switch to another while your opponent has one turn left before they use their sync move, the new sync pair can then take an action and absorb your opponent's sync move for its teammates. Just remember that it's too late to switch once your opponent's sync move is already in the queue. (You'll have a much easier time tracking this if you turn on Action Order in the battle settings.)

There's one additional quirk for co-op battles: if you trigger a unity attack, your team will have a window of opportunity to line up new moves before the enemy puts its sync move back in the queue. If you can trigger a unity attack just before the opponent's sync move, you're likely better off attacking instead of switching. In fact, if you switch and fail to activate the unity attack, you might cause one of your teammates to lose a sync pair unnecessarily instead!

You have many options for being successful in single-player battles, but there are plenty of sync pairs that can make things quicker and easier against a variety of opponents. Try out these sync pairs if you're looking for a boost. 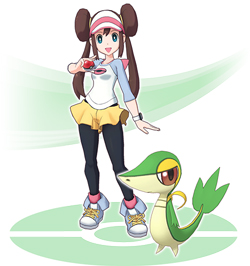 Rosa & Snivy: A great partner sync pair to almost any other, Rosa & Snivy are best known for their incredible defensive stats and the move Time to Energize!, which increases the move gauges of all allied sync pairs by three. (In a single-player battle, it instantly fills your move gauge, since it applies to each of your three sync pairs.) Their other Trainer move, X Sp. Atk All, makes them particularly effective alongside sync pairs that use special attacks.

Hau & Raichu: This sync pair has a great collection of moves for attacking all three of the opponent's sync pairs at once, which often allows you to knock out a boss's sidekicks without ever targeting them directly. Hau's Trainer moves—X Sp. Atk and Feel the Alolan Breeze!—boost the sync pair's Sp. Atk and Speed, the two best stats for this strategy. Once the sync pair's stats are boosted, you can fire off powerful Discharge attacks to damage each opponent.

Will & Xatu: We haven't mentioned tech sync pairs much, but Will & Xatu can take on tough encounters that even some of the best strike sync pairs struggle with. The passive skill Impervious stops this sync pair's stats from being lowered, so you can boost its stats to your heart's content without much fear of being countered. You can then leverage the stat boosts with Stored Power, which has greater power the more the user's stats are raised. Try combining Will & Xatu with teammates that can boost their stats.

You'll almost always want to use a strike sync pair (or two) that deals supereffective damage in co-op battles to make the most of unity bonuses and unity attacks, so it doesn't make much sense to suggest specific sync pairs for offense. Instead, here are three powerful support sync pairs that can make challenging encounters much easier. 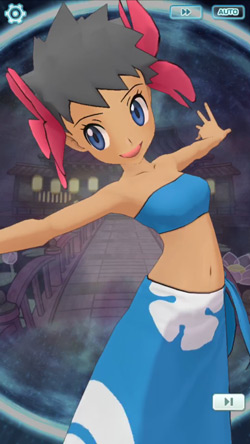 Phoebe & Dusclops: This sync pair can do a bit of everything. Dire Hit All + sharply raises the critical-hit rate of all allied sync pairs, Unbreakable Bonds! boosts the move gauge and Attack of all allied sync pairs based on how low Phoebe & Dusclops's HP is, and unlike most support sync pairs, these two can actually dish out some damage. Their Pass It On passive skill doesn't do anything in single-player battles, but in co-op, it passes half of their raised stats on to the sync pair that replaces them after they're defeated.

Marley & Arcanine: This sync pair is popular in certain co-op battles for one big reason: the incredible We're Standing Strong! move. It blocks status conditions on the allied field of play in a similar way as Safeguard in the Pokémon RPGs, and it also does one better: it removes any existing status conditions from all allied sync pairs. It even works when Marley & Arcanine are asleep or frozen, because it's a Trainer move and not a Pokémon move. Consider this sync pair anytime your opponents can inflict sleep or poison.

Roxanne & Nosepass: These two may start as a humble 3★ sync pair, but don't let that fool you. Unlike in most other support sync pairs, in this team it's the Pokémon that makes the strategy, as Nosepass's Wide Guard blocks a single attack that would hit each sync pair on your team. (This does not work on opposing sync moves.) Such attacks normally deal a ton of damage in co-op, so Nosepass can really improve a team's damage output by helping squishier strike sync pairs attack safely. Roxanne's stat buffs are pretty swell, too. Study Buddies! sharply raises the Sp. Atk and Speed of all allied sync pairs, while X Defense All does the same for Defense.

Check back soon at Pokemon.co.uk/Strategy for more tips about Pokémon Masters and other Pokémon video games.