Your adventure takes place in Hoenn, a region that consists of a main island that stretches widely from east to west along with countless islets that dot the deep blue sea around it. A live volcano steams constantly in the heart of this green-covered island. Look forward to a region rich with natural beauty, a variety of Pokémon, and extraordinary people. Among those folks is Pokémon Professor Birch, who runs the Pokémon Lab in Littleroot Town. With him, you will have your first meeting with the Pokémon that will become your partner on your journey, and a new bond will be born. You’ll also encounter incredibly tough Trainers during your journey and visit Pokémon Gyms, where Pokémon Trainers gather and Gym Leaders stand ready for Trainers to challenge them.

As the story unfolds, you will battle Team Magma in Pokémon Omega Ruby and Team Aqua in Pokémon Alpha Sapphire. Led by Maxie, Team Magma seeks to expand the land, while Archie and Team Aqua wish to expand the seas. In order to bring about these grand plans, each will turn to the power of a Legendary Pokémon: Groudon or Kyogre. Team Magma pursues Groudon, while Team Aqua goes after Kyogre. What could be driving them to such lengths? These Legendary Pokémon also undergo an event called Primal Reversion to become Primal Groudon and Primal Kyogre. These Pokémon play a great role in shaping the stories in which they each appear.

Also in Pokémon Omega Ruby and Pokémon Alpha Sapphire, a new story involving the Hoenn region unfolds—the Delta Episode! This episode involves the history of the Hoenn region, reaching three thousand years into the past, and makes the mysteries of Mega Evolution clear at long last. The troubled tale begins with Zinnia, a young woman who bears a certain destiny. The story includes appearances from Team Magma and Team Aqua, Steven, Gym Leader Wallace, and other familiar faces. Don’t miss the conflict between Rayquaza and Deoxys!

The Pokémon-Amie feature, which debuted in Pokémon X and Pokémon Y, enables players to become closer with their Pokémon by petting them, playing games with them, and feeding them. You can play with the Pokémon on your team at any time by using Pokémon-Amie—the more you care for your Pokémon, the deeper your bond will become. As your Pokémon become more affectionate toward you, they will be more likely to avoid attacks in battle, land critical hits on opponents, and perform more admirably than before.

Look around the Hoenn region to find the perfect spot to create your very own Secret Base. Work on making a space that is all your own, just the way you like it. And using communication features, you’ll be able to easily connect with other players all around the world to share your Secret Bases with one another. You can also battle with the other players at their Secret Bases or play a capture-the-flag activity. Visit lots of Secret Bases and collect lots of flags to improve your team’s rank and get rewards.


Fly with Latios and Latias

Look forward to encountering the Eon Pokémon Latios and Latias. In Pokémon Omega Ruby, you can team up with Latios, while Latias joins you in Pokémon Alpha Sapphire. Partway through your adventure, you’ll become able to fly in the sky on the backs of these Legendary Pokémon. Gaze down over the wide Hoenn region as you fly freely wherever you wish. Among the destinations you can fly to are very special locations called Mirage spots. In Mirage spots, you may be able to obtain valuable items or find Legendary Pokémon and other rare Pokémon that cannot be found elsewhere in the region.

The PokéNav Plus is your best friend on your journey. It’s a handy tool that will help you navigate your adventure as a Pokémon Trainer. Outside of battles and special events, the PokéNav Plus will always be displayed on the lower screen of your Nintendo 3DS system. You can instantly switch between its four main functions with touch input and be ready to play in no time.

In Pokémon Omega Ruby and Pokémon Alpha Sapphire, you can obtain the Mega Stones needed to Mega Evolve all of the Mega-Evolving Pokémon that appeared in Pokémon X and Pokémon Y. Be sure to look high and low to find these mysterious and amazing items!

Pokémon Omega Ruby and Pokémon Alpha Sapphire are available in stores and in Nintendo eShop. 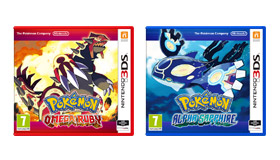