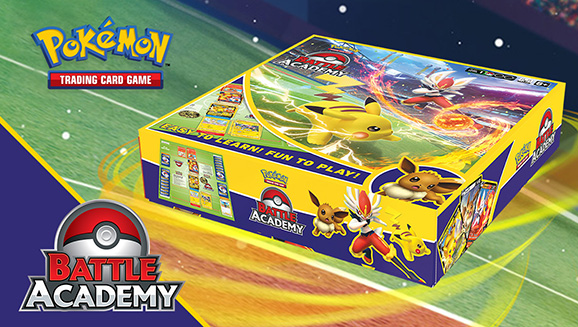 Enjoy the thrill of battling right out the gate with the latest version of the ready-to-play Pokémon Trading Card Game Battle Academy! Updated with fun new decks and cards, this version contains everything that two players need to charge headlong into battle, along with guides to the decks so your first game is easy to follow.

Choose between fiery, feisty Cinderace or electrifyingly engaging Pikachu to lead your team in a heads-up battle against another Trainer. Then, switch up the decks to play adorable Eevee against Cinderace or Pikachu, and lead a different team of Pokémon into the arena!

With a little strategy, a little luck, and the contents of this incredible box, you can battle with the best and have a blast while doing it. Best of all, this latest version of the Battle Academy is fully compatible with other Pokémon TCG products, including the first Battle Academy.

The Pokémon Trading Card Game Battle Academy is now available in the Pokémon Center and where Pokémon TCG products are sold.