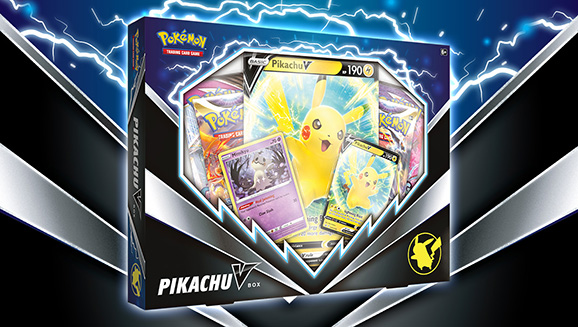 Pikachu is all charged up and ready to leap into battle as an electrifying Pikachu V in the Pokémon TCG: Pikachu V Box. This foil Pikachu V promo card will shock your opponents with its Lightning Blast attack: For the cost of 2 Lightning and 1 Colorless Energy, Lightning Blast does 100 damage to the opponent's Active Pokémon. To give the move a quick burst of power, you can opt to discard all Lightning Energy that you've attached to Pikachu V to do an extra 120 damage. Given that sly grin on Pikachu V's face, we should have known that it had a trick in store.

In addition to Pikachu V, the Pikachu V Box also includes a foil card featuring Mimikyu along with a foil oversize card featuring Pikachu V that will look great on display in your collection. You'll even get four Pokémon TCG booster packs to add to your deck. With Pikachu V on your team, you're sure to have a blast.