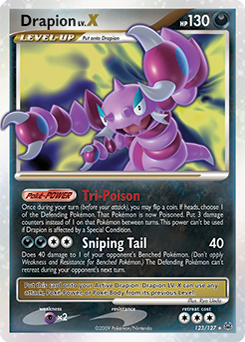 Once during your turn (before your attack), you may flip a coin. If heads, choose 1 of the Defending Pokémon. That Pokémon is now Poisoned. Put 3 damage counters instead of 1 on that Pokémon between turns. This power can't be used if Drapion is affected by a Special Condition.

Put this card onto your Active Drapion. Drapion LV. X can use any attack, Poké-Power, or Poké-Body from its previous Level.