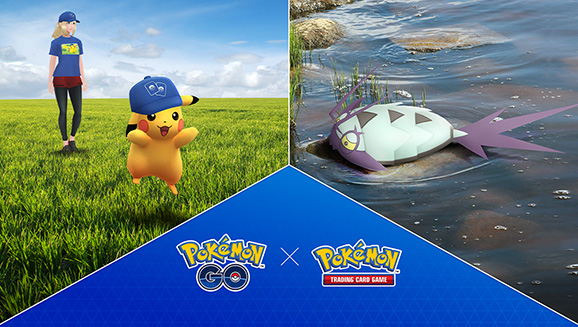 Two incredible universes collide in the Pokémon TCG: Pokémon GO expansion, and Trainers can celebrate that union with Pokémon GO’s in-game Pokémon TCG Crossover Event happening through June 30, 2022, at 8:00 p.m. local time! Wimpod and Golisopod, which appear in the Pokémon TCG expansion, make their splashing Pokémon GO debut. The Mystery Box awaits, offering Trainers a chance to encounter Shiny Meltan and a reduced cooldown period before it can be opened again. Mewtwo, the Genetic Pokémon, also returns to five-star raids and will know one of two special Charged Attacks depending upon when you catch it.

Collection Challenges abound with not one, not two, but SIX Collection Challenges of varied difficulty! Put your skills to the test by catching Pokémon featured in the new Pokémon TCG expansion. Trainers who successfully complete all six challenges will earn rewards—including XP, a Lure Module, and an Incubator, as well as encounters with Venusaur, Charizard, Blastoise, and Meltan.

As a nod to Solrock and Lunatone’s stellar appearance in the new Pokémon TCG expansion, both Meteorite Pokémon will be appearing in the wild around the world throughout the event. At the event’s conclusion, Lunatone will shift to the Western Hemisphere while Solrock moves to the Eastern Hemisphere.

Other Pokémon appearing in the wild throughout the event will include the following.

Pokémon appearing in Raid Battles during the Pokémon TCG Crossover Event will include the following.