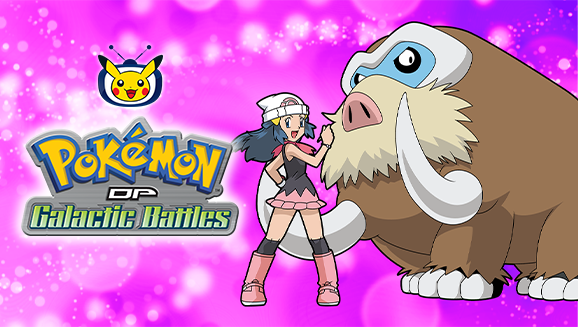 Ash, Dawn, and Brock continue their travels through the Sinnoh region, taking on new challenges and meeting more Pokémon.

The Sinnoh region still calls to our young heroes as Ash, Dawn, and Brock continue their adventures in Pokémon: DP Galactic Battles, the 12th season of Pokémon the Series. You’ll be able to watch the entire season when it arrives on Pokémon TV this Friday.

In Pokémon: DP Galactic Battles, the menace of Team Galactic continues to loom over the Sinnoh region. Ash and friends keep getting caught up in the schemes of this mysterious group of villains, but our heroes have their own unexpected challenges to face as well. Dawn has her hands full dealing with her Pokémon, while Ash’s ongoing rivalry with Paul finally comes to a head in a six-versus-six Full Battle! It might be the ultimate test of training styles—will Ash come out on top?

Remember that you can watch Pokémon: DP Galactic Battles on Pokemon.com, or you can load up the Pokémon TV mobile app to enjoy these classic episodes on the go!