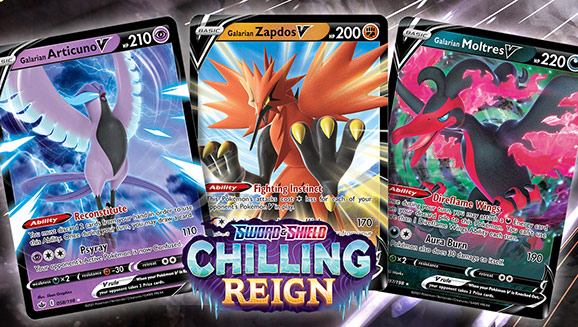 Get an early look at these Legendary Pokémon along with other cool cards from the upcoming expansion.

A cool breeze continues to blow into the Pokémon Trading Card Game, which can only mean that the next expansion, Sword & Shield—Chilling Reign, is on its way. This collection features over 190 cards, including fantastic new Pokémon V and Pokémon VMAX and more Single Strike and Rapid Strike cards. We’ve already had a sneak peek at some of the supercool cards you’ll find in Pokémon TCG: Sword & Shield—Chilling Reign, but there’s still so much to see. Check out a few more of these incredible cards and get ready for the expansion’s arrival on June 18, 2021. 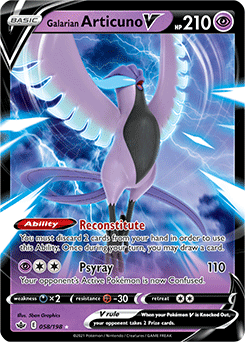 With its glowing eyes and energy bursting forth among a field of cracking electricity, Galarian Articuno is looking particularly intimidating as a Pokémon V. Considering the waves that are also emanating from this Legendary Pokémon, the card appears to show Galarian Articuno V’s Psyray attack, which not only hits your opponent’s Active Pokémon for 110 damage but also makes it Confused. Combine that with this Pokémon’s Reconstitute Ability, which allows you to draw a card once per turn by discarding two cards from your hand, and your opponents will have a good reason to be intimidated. 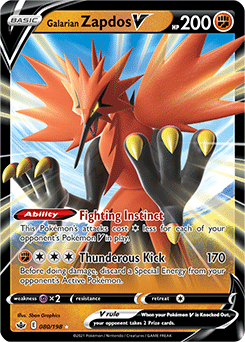 As a Pokémon that does a lot of running, Galarian Zapdos obviously has some very strong legs. Which means that if you’re seeing this Legendary Pokémon as it’s depicted on this card, with its massive talons about to land on your face, you’re in a heap of trouble. And yeah, its Thunderous Kick attack may have a fairly substantial cost, but the 170 damage it does—not to mention its secondary effect of discarding a Special Energy from your opponent’s Active Pokémon—is nothing to sneeze at. Plus, if your opponent has some of their own Pokémon V ready to go, Galarian Zapdos V’s Fighting Instinct Ability, which lowers the cost of Thunderous Kick by one Colorless Energy for each opposing Pokémon V in play, will allow you to pull off that damaging move much sooner. 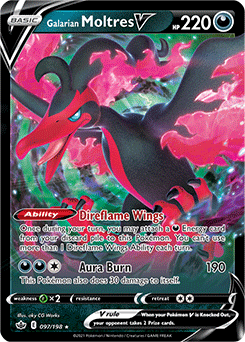 The stark contrast between Galarian Moltres V’s black body and the bright, reddish-pink aura of its wings makes it stand out in a crowd. And with its wings spread wide and its claws bared, this Legendary Pokémon looks ready to attack. In fact, you’ll be able to get this Pokémon V ready to attack sooner than you might expect thanks to its Direflame Wings Ability, which lets you attach a Darkness Energy card from your discard pile to Galarian Moltres V every turn. Before they know it, your opponent will be feeling the heat of Aura Burn, which hits for 190 damage. Just watch out—this attack also does 30 damage to Galarian Moltres V. 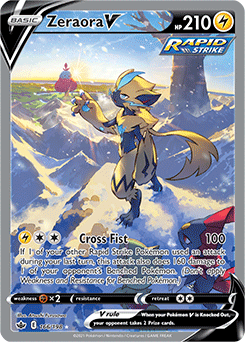 Zeraora can be a fierce Pokémon, so it’s nice to see it chilling out in the snowy mountaintops of the Galar region’s Crown Tundra. The white snow contrasts nicely with the warm, grassy colors on Dyna Tree Hill, which we can see looming in the background on this Rapid Strike card. The Mythical Pokémon seems to be in a moment of quiet contemplation—Kecleon and Weavile are even hanging out with it. This seemingly peaceful scene might lull your opponent into a false sense of security, which will make Zeraora V’s Cross Fist attack all the more surprising. It does 100 damage to their Active Pokémon, but if one of your other Rapid Strike Pokémon used an attack during your previous turn, Cross Fist also does 160 damage to one of their Benched Pokémon. It’s a great way to dish out a lot of punishment, shall we say…“rapidly”? 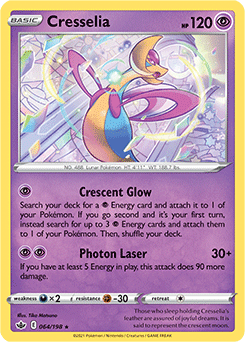 Cresselia is looking as elegant as ever on its card, and if your deck is filled with Psychic-type Pokémon, you might want to have this Legendary Pokémon on your team. Its Crescent Glow attack, which only requires one Psychic Energy, allows you to search your deck for a Psychic Energy card to attach to one of your Pokémon. However, if your opponent goes first when the match begins, you can use this attack on your first turn to snag three Psychic Energy cards from your deck to attach to a Pokémon. It’s a great way to get some powerful attacks ready to go at the start of a game. Having multiple Energy in play also helps boost Cresselia’s Photon Laser attack, which normally only does 30 damage, but hits for 120 damage if you have more than four Energy on the board.


Of course, there are plenty more amazing cards to be found in Pokémon TCG: Sword & Shield—Chilling Reign. Be on the lookout for them when the expansion releases on June 18, 2021.