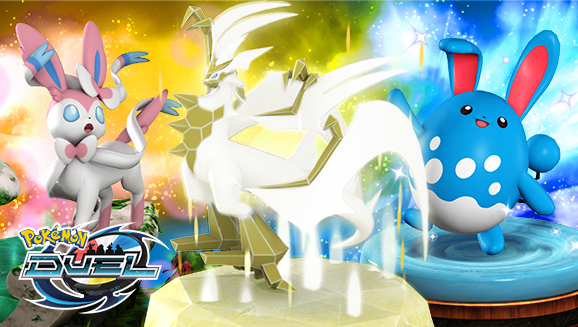 As if that's not enough, you'll also receive [R] Azumarill as a special log-in bonus the first time you log in between 1 a.m. PDT on March 13 and 6:59 a.m. PDT on April 9, 2019. This figure has the Huge Power Ability, which increases its attack damage by 50. Plus, you'll be able to use a 3-Day Duel Boost and a 3-Hour Enhanced Boost for free once during this period.

Azumarill isn't the only Fairy-type Pokémon you can add to your deck in March. Available for the first time, you can earn a [UX] Sylveon as a Monthly Point Reward. [UX] Sylveon can zip around the board with its 3 MP, and it can nimbly move through Dragon-type and Dark-type Pokémon using its Ability. Plus, one of its attacks can force Dragon-type opponents back to the Bench, and its Moonblast attack gets +50 damage if you pair it with [EX] Cresselia.

Two new figures are available to Player Pass subscribers or in Key and Time Boosters. [EX] Diancie's Ability gives Fairy-type Pokémon advantages against Dragon-type and Dark-type Pokémon, such as [UX] Mega Rayquaza and [EX] Zoroark. It'll pair nicely with [EX] Cresselia and [UX] Sylveon because it, too, has the Moonblast attack. The other new figure, [UX] Ultra Necrozma, is available as a Monthly Point Reward. If you use the plate Ultra Burst, [UX] Dusk Mane Necrozma or [UX] Dawn Wings Necrozma can change its form to [UX] Ultra Necrozma for 7 turns. [UX] Ultra Necrozma can use an exclusive Z-move, Light That Burns the Sky!

Pokémon Duel is available now for iPhone and iPad in the App Store, for Android devices on Google Play, and for Kindle Fire on the Amazon Appstore. Download it and begin the epic battle today!