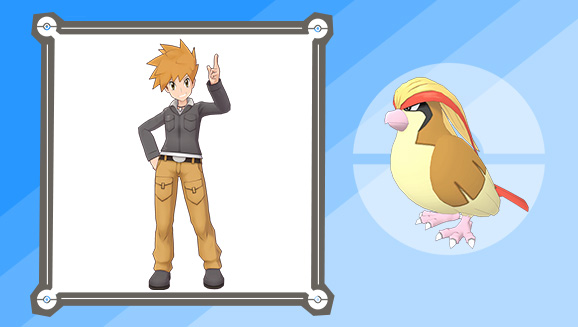 So many great Pokémon adventures feature a rival character to help motivate the player to push themselves even harder. It’s one thing to become the Pokémon League Champion, after all—it’s a whole other thing to beat out someone else to become the Champion first. In the world of Pokémon, perhaps the most iconic of these rival characters is Blue, who made his first appearance all the way back in the very first Pokémon video games, Pokémon Red and Pokémon Blue.

These days, players can join forces with Blue and his sync pair partner Pidgeot in the newly released Pokémon Masters for iOS and Android devices. This spotlight focuses on this Pokémon Trainer from the Kanto region who is determined to reach the top of the Pokémon League and overshadow the main character.

As mentioned above, we were first introduced to Blue in Pokémon Red and Pokémon Blue. Blue is the grandson of the Kanto region’s famous Professor Oak, and he is a childhood friend of the player’s character. Despite Blue’s history with the main character, he can be...a bit abrasive. He’s extremely competitive, not to mention impatient and unfriendly. Not exactly the most personable combination! He doesn’t shy away from boasting about the strength of his Pokémon—or from taunting other characters with a snide remark or two.

His bragging isn’t necessarily unwarranted, though. In those initial Pokémon adventures, Blue gets his first Pokémon at the same time as the player. As fate would have it, the Pokémon he chooses will always have a type advantage over the player’s choice. So if the player picks Bulbasaur as their first partner Pokémon, Blue will end up with Charmander. Not fair!

Throughout the game, Blue will pop up to challenge the player from time to time. True to his ambitious nature, Blue always seems to be one step ahead of the player’s progress. This natural advantage reaches its logical conclusion at the end of the game, at Indigo Plateau, when the player discovers that Blue has already become the Pokémon League Champion.

Not surprisingly, Blue returns in Pokémon Yellow: Special Pikachu Edition. His role here is identical to his original appearance, but he begins the adventure with an Eevee. His Eevee’s final evolved form is determined based on the outcome of some battles he has against the player early in the game. 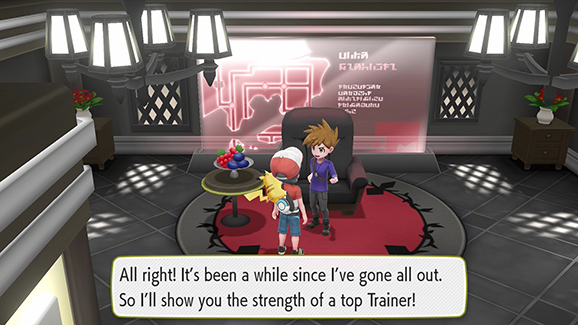 Blue’s role expands a bit in Pokémon Gold and Pokémon Silver, where we learn that after his defeat at the Pokémon League, he took over the Viridian City Gym Leader position that was abandoned by Giovanni. Interestingly enough, Blue is not the player’s rival in Pokémon: Let’s Go, Pikachu! and Pokémon: Let's Go, Eevee! (that role goes to Trace instead). Blue does, however, show up for a battle at Silph Co., and he once again takes over the Viridian City Gym after the player beats the Champion. 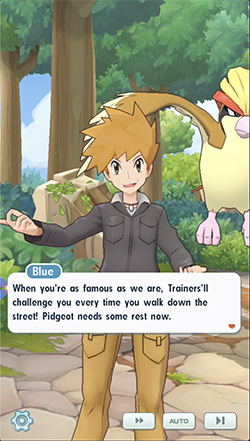 Currently, players can join forces with Blue and battle alongside him and his sync partner Pidgeot in Pokémon Masters. The duo is appearing in a special story event where you can team up to take on other Kanto region Trainers for some great rewards.

The ongoing Pokémon Adventures manga is heavily based on the Pokémon RPGs, and just like in the RPGs, Blue appears as Professor Oak’s grandson and the rival to the main character, Red. However, Blue’s role is greatly expanded from the video games, making Pokémon Adventures the best place to go to see him fleshed out as a character. 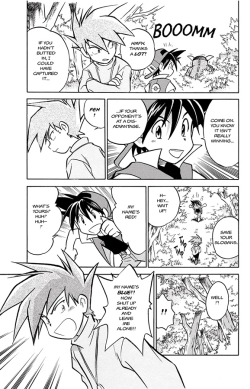 We’re introduced to Blue within the first few pages of the manga, as Red, showing off his Pokémon-catching skills to a group of kids, brags that Blue doesn’t stand a chance against him. Then, upon entering a forest, Red sees Blue and his Charmander confronting the Mythical Pokémon Mew. Recognizing Mew’s strength, Blue recalls his Pokémon, which upsets Red. Convinced that he can defeat Mew, Red sends out his Poliwhirl, only for it to be quickly defeated.

This chance encounter sets up Blue as the cool-and-collected counterpart to Red, who’s more brash and excitable. A subsequent encounter with a wild Kangaskhan reveals that despite Blue’s calm demeanor, he’s also not opposed to taking advantage of a weakened opponent to win a battle. Blue and Red’s disparate personalities make them fast rivals, but over time, their attitude toward each other softens. 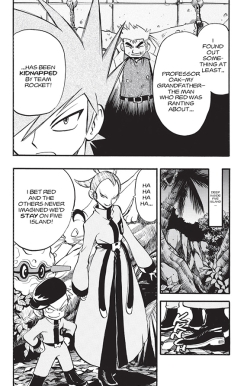 Blue continues to be a driving force in Pokémon Adventures, frequently teaming up with Red and another Pokémon Trainer named Green. We even follow Blue’s own adventures with his Pokémon team, a group that includes Scyther—his first Pokémon—as well as Golduck, Machoke, and Charmander (who eventually evolves all the way into Charizard). The additional rivalry Blue develops with Gym Leader Koga is especially compelling, as is the special connection he makes with Mewtwo.

With his extensive training and natural skill as a Pokémon Trainer matched with his somewhat aloof demeanor, the Pokémon Adventures version of Blue is perhaps the most interesting iteration of the character. This manga is required reading for anyone who wants to dive deeper into the world of Pokémon.

Although Blue doesn’t appear in the long-running Pokémon the Series (where Gary Oak serves as the main character’s rival and Professor Oak’s grandson), he does play a large role in the Pokémon Origins miniseries. This four-episode series follows the storyline of Pokémon Red and Pokémon Blue, so the iteration of Blue seen here will feel familiar to those who have played those early game releases.

Like Red, the main character of Pokémon Origins, Blue has been tasked by Professor Oak to help complete the Pokédex. In exchange for their help, the professor offers the boys a Pokémon partner to accompany each of them on their journey. Red chooses Charmander, prompting Blue to take Squirtle so he has a type advantage over his rival. 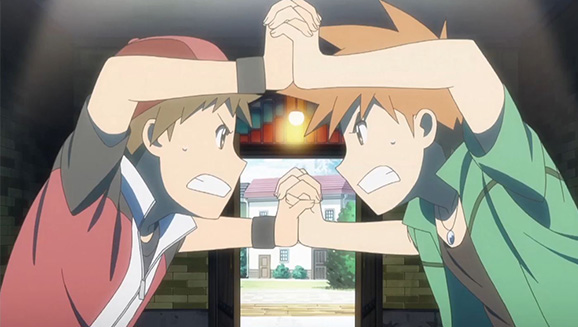 It isn’t long before Blue challenges his rival, who finds himself overwhelmed by Blue’s aggressive style of battling. We learn right away that Blue is very confident in his abilities. He’s not quite as rude and is more playfully combative than his video game counterpart, but he still has little patience for Trainers he feels are beneath his skill level. He’s also more concerned about becoming a powerful Pokémon Trainer than completing his Pokédex for his grandfather. This causes him to act selfishly, often putting his own interests ahead of others—even when there’s danger.

Throughout the course of the series, Blue has multiple run-ins with Red that require them to work together, even if Blue is reluctant to do so. As in the games, the Blue achieves his goal of becoming the Pokémon League Champion, leading to a climactic final battle between him and Red. 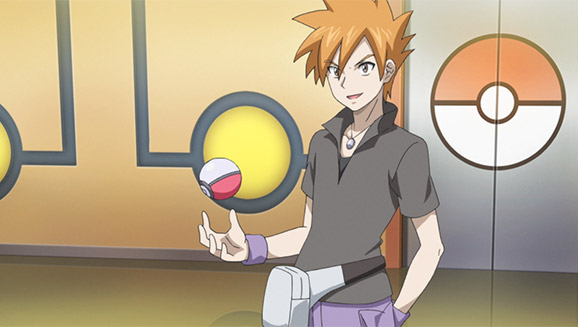 Blue also stars in an episode of the Pokémon Generations miniseries. The series’ third episode, The Challenger, follows Blue as he effortlessly takes on the Kanto region’s Elite Four to become the Pokémon League Champion. The episode ends with Red entering Blue’s chamber, ready for battle. Clocking in at just under five minutes, this short doesn’t have much time for character development, but we do get a good demonstration of Blue’s strength as a Pokémon Trainer, as well as his self-assured attitude. 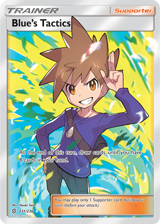 Despite his prominence in the world of Pokémon since the very beginning, Blue has only recently made an appearance in the Pokémon Trading Card Game. His first and only card, Blue’s Tactics, debuted in the Sun & Moon—Unified Minds expansion.

This Supporter card allows you to draw cards until you have 8 cards in your hand at the end of your turn. It’s a quick and easy way to make sure you have plenty of cards to work with during your next turn. Just like Blue, you’ll feel like you’re one step ahead of your opponent.

Blue is a character you love to hate and hate to love. It’s always a treat to see him show up in any medium to antagonize the main character. He’s a great rival because he does have the skill to back up his boasting, which forces the protagonist—be it Red or the player—to work even harder to best him. Will Blue show up in future Pokémon storylines? We can’t say for sure, but until then, we’ll just say, “Smell ya later!”