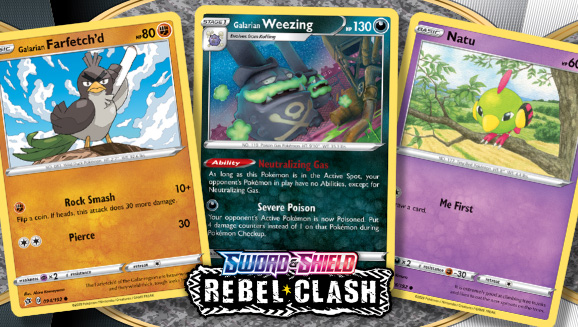 Take a closer look at some of the amazing artwork in the latest Pokémon TCG expansion.

With the arrival of Sword & Shield—Rebel Clash, the latest Pokémon Trading Card Game expansion, it's time to take a look through the new cards and admire some of their incredible artwork. After all, these illustrations add to the game's personality, making it feel like you're battling with real Pokémon. As you're collecting your Pokémon TCG cards, be sure to take some time to admire the art and discover your own favorites. 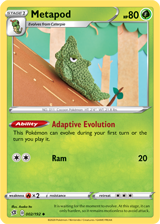 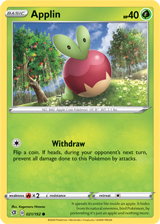 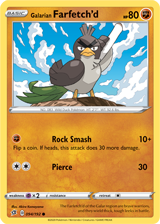 Sometimes it's fun to take a single aspect of Pokémon TCG card art, such as the depiction of a tree or interpretations of Pokémon's attacks, and examine how different artists approach that subject. We wanted to see how artists tackled the simple concept of a blue sky, and the results were quite interesting. On the Metapod card, for example, we see perhaps the most basic blue sky possible—a flat, blue plane. Though comparatively primitive, this style works for the whimsical tone of the art. Applin's sky is depicted much more realistically. The blue color is muted, and the varying thickness of the clouds creates a sense of depth. Compare that to the Galarian Farfetch'd card. The bright, bold color really draws the eye, making the card art look like an animation still. The fluffy, swirling clouds even lend a hint of tension as they stand in contrast to the stern-looking Pokémon's steady stance. 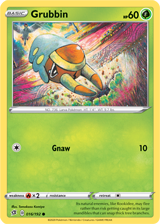 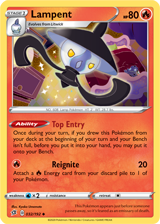 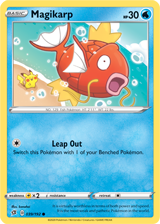 Observant Pokémon TCG collectors have undoubtedly noticed that cards regularly feature Pokémon other than the card's subject. Sometimes these cameo appearances are obvious, but occasionally you'll have to look closely in the background. In Sword & Shield—Rebel Clash, we noticed a few cards where the card subjects appear to be frightened by other Pokémon lurking around. Take Grubbin, who is actively fleeing from a pursuing Unfezant. Grubbin may have a determined look on its face, but that lone tear in its eye tells us this little Pokémon is scared. Lampent, on the other hand, is the one causing the fear. Just check out poor Sableye peering out from beneath the bed covers—it really wants Lampent to go away. Perhaps Sableye is familiar with Lampent's Pokédex entry, which can be read in the lower-right corner of the card. The funniest of these fleeing Pokémon has to be Magikarp, though. That adorable Pikachu just wants to say hello, but it's scared Magikarp to the point of leaping into the sky! What is this? Pokémon: Magikarp Jump? 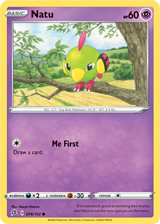 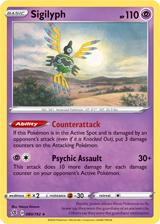 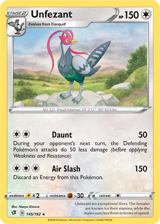 When looking at the new cards within a Pokémon TCG expansion, we typically find an artist whose work stands out to us. In Sword & Shield—Rebel Clash, that artist is Naoyo Kimura. We were first struck by the Natu card, specifically the incredible detail of the card's background, which depicts vast farmland fields. That visual hook continues in the Sigilyph and Unfezant cards. Seeing these Pokémon in such textured, artfully drawn rural settings helps create the feeling of Pokémon in the real world. 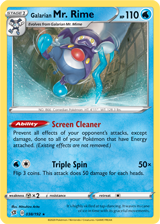 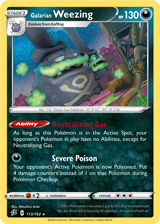 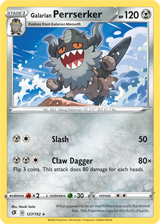 Sword & Shield—Rebel Clash is the second Pokémon TCG expansion featuring Pokémon that were originally discovered in the Galar region. It's always exciting to see new Pokémon depicted in Pokémon TCG card art, but one thing stood out to us this time: Galarian Pokémon can grow some really sweet facial hair! Check out Galarian Mr. Rime's thick 'stache. It certainly lends the Pokémon a dignified air. Galarian Weezing may not have hair per se, but the green pollution gathered around its faces in the shape of a mustache, beard, and eyebrows gives the Pokémon a dapper look. But few Pokémon can compete with the mighty beard of Galarian Perrserker. This bushy beauty is unkempt and unrivaled. Not only that, but the “helmet” on Galarian Perrserker's head is actually comprised of hardened hair! Don't mess with this Pokémon's 'do. A special shout-out to Dan, a Galar region referee who—while not a Pokémon—maintains a somewhat fussy-looking, but undeniably stylish, mustache.

Of course, these are just a few of the many new cards to be found in the Pokémon TCG: Sword & Shield—Rebel Clash expansion. There are plenty more amazing artistic pieces to see. Have fun discovering them! 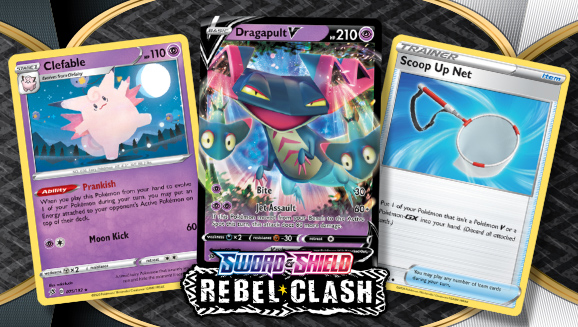 Ellis Longhurst looks at new cards that are ready to break away from the pack in the latest Pokémon TCG expansion.