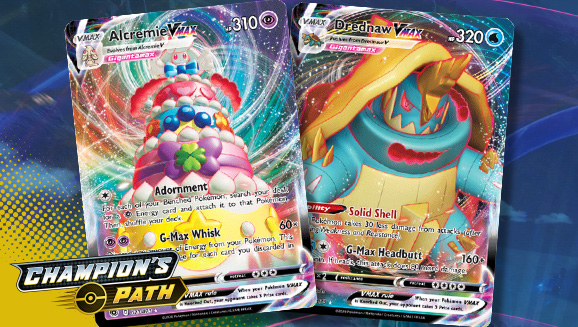 See some of the Pokémon V and Pokémon VMAX cards that will have your opponents trembling in fear in the latest expansion.

With their massive HP and hard-hitting attacks, Pokémon V and Pokémon VMAX can be real game changers in the Pokémon Trading Card Game. The latest expansion, Champion's Path, brings even more of these powerful Pokémon into the fray. There are cards featuring some recently-discovered Pokémon from the Galar region along with some old favorites as well. Take a look at some of the incredible cards that you'll find in the Pokémon TCG: Champion's Path expansion when it arrives on September 25, 2020. 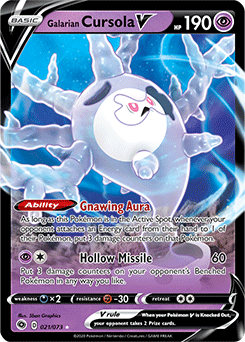 Have you ever wanted to make your opponent afraid to take their turn? Galarian Cursola V's Gnawing Aura Ability will do just that. When this card is in the Active Spot, this devious skill forces your opponent to damage their Pokémon if they attempt to power them up. Yes, when your opponent attaches an Energy card from their hand onto a Pokémon, they must also place three damage counters on that Pokémon as well. Combine that Ability with Galarian Cursola V's attack—which allows you to place three damage counters on any of your opponent's Benched Pokémon along with its standard 60 damage to their Active Pokémon—and you can chew through your opponent's team in no time! 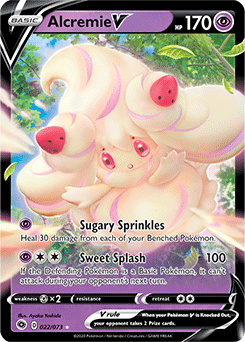 This fluffy friend will make a valuable addition to your team if you're hoping to employ some delay tactics. Alcremie V's Sweet Splash attack hits for a solid 100 damage, plus it prevents your opponent's Pokémon from attacking during their next turn, assuming the Defending Pokémon is a Basic Pokémon. This will obviously put your opponent at a large disadvantage, but if they're able to evolve that Basic Pokémon before it's Knocked Out, you'll have to adjust your strategy. Alcremie V's Sugary Sprinkles attack may not do any damage, but it does heal 30 damage from each of your Benched Pokémon. This could come in handy if you go up against an opponent that has, oh, let's say a Galarian Cursola V. 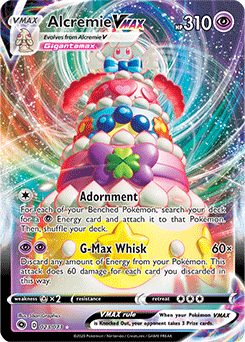 If you do need to adjust your strategy with Alcremie V, evolving it into Alcremie VMAX might be the way to go, especially if you have a deck that relies on Psychic-type Energy. This Gigantamax Pokémon's Adornment attack lets you search your deck for Psychic-type Energy cards and attach one to each of your Benched Pokémon. You can follow that up with the G-Max Whisk attack, which lets you discard any amount of Energy from your Pokémon, doing 60 damage for each card you get rid of. Just think—attaching an Energy card to a full Bench and then discarding those same cards during your next turn will let you hit your opponent for a massive 300 damage. Alcremie VMAX's bright colors and large, soft eyes makes it look harmless, but it can bring the pain! 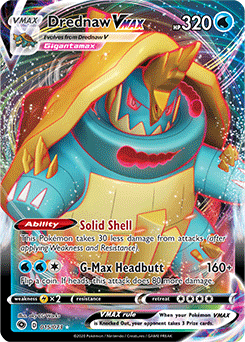 On the other side of the spectrum, Drednaw VMAX looks like a tough customer with its fierce fangs, thick shell, and a determined look in its eye. And that shell is hardly decorative. Drednaw VMAX's Solid Shell Ability lets it take 30 less damage from attacks. Meanwhile, this Gigantamax Pokémon's G-Max Headbutt attack hits your opponent's Active Pokémon for 160 damage. However, by flipping a coin, the attack will do an extra 80 damage if you get heads. It may rely on luck but dishing out 240 damage in one shot is worth the chance. 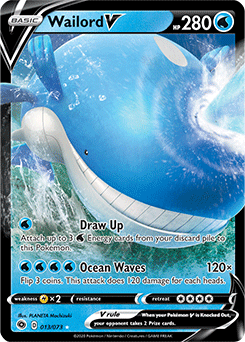 It's big, it's blue, it's got a goofy, infectious grin that will stand out in any Pokémon TCG deck—it's Wailord V! This Pokémon's Ocean Waves attack can do a suitably sizable 360 damage if you're lucky enough to score heads on three separate coin flips. This potential power does come with a considerable cost, though—the attack requires four Water-type Energy to utilize. Fortunately, Wailord V's Draw Up attack lets you recover up to three Water-type Energy cards from your discard pile to attach to the card. Play this card at the right time (and get a few good coin flips), and you'll crash over your opposition like so many ocean waves. 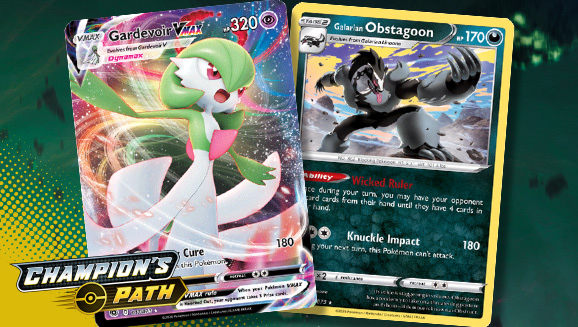