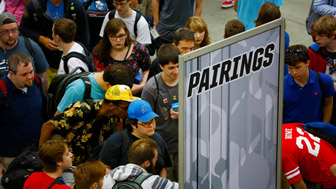 Top video game players from different rating zones will receive invitations based on their Championship Points standing at the end of the season. Invitations will be divided into two tiers: players who reach a certain Championship Points standing will receive an invitation to play in Day One on Friday, and the best players in each zone automatically qualify for Day Two and will also receive a Travel Award. Invitations will be distributed as follows:

Some players will earn an invitation that allows them to advance directly to Day Two without playing in Friday's rounds. These invitations will also include Travel Awards. Day Two invitations are divided by rating zone as follows:

Players in Japan and South Korea will be awarded both Friday invitations and Day Two invitations as determined by each country's organized play system.

Players with invitations from the 2014 World Championships will play on Friday unless they qualify for Day Two based on Championship Points.

Friday: All players with Friday invitations will play Swiss rounds. Players with 2 or fewer losses will advance to Day Two Saturday.

Saturday: Swiss rounds for players who earned a Day Two invitation and players who advanced from Friday. This will be a new tournament: match records from Friday will not carry forward, and players are not required to use the same team they played with on Friday.

Late Saturday: A top cut of 8 players will compete in single-elimination rounds.