Get excited, Trainers! The Pokémon TCG Global Finals are fast approaching in the Pokémon Players Cup III. The tournament promises to showcase some of the best Pokémon TCG gameplay, as sixteen of the top Trainers from around the globe compete for the Players Cup III title and a chance to win one of four travel awards to a future International Championship.

Progressing to the Global Finals was no easy feat for these Trainers. They completed up to 50 tournaments on the Pokémon Trading Card Game Online, then battled with 128 of the best players in their Rating Zone during the Region Qualifiers. The top four Trainers from each of the North America, Europe, Latin America, and Oceania Rating zones who progressed to the Global Finals are:

The Finals will be broadcast on April 23–25 at Twitch.tv/Pokemon and YouTube.com/Pokemon. If you think you know what to expect—think again! Trainers will have the opportunity to change their deck for the Global Finals and, for the first time, they will be able to battle using cards from the Pokémon TCG: Sword & Shield—Battle Styles expansion.

Eternatus VMAX and Arceus & Dialga & Palkia-GX/Zacian V continue to be popular choices for Trainers competing in the Pokémon TCG Players Cups. Nearly 40 percent of all Trainers brought one of these two decks to battle. 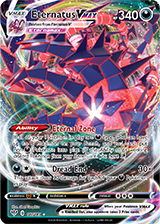 Eternatus VMAX is the success story of the tournament so far. The deck failed to really impress at Players Cup I and II, but it has earned four Trainers their places in the Global Finals this time around. Eternatus VMAX has always employed a simple strategy—fill the Bench with Darkness-type Pokémon and quickly take Knock Outs using Dread End.

In past events, the deck has struggled to overcome opponents who use Energy disruption cards early in the game. Federico Racioppi, Matias Martini, Andres Gabaldon, and David Daritan successfully regained control of the tempo of the game by including Crushing Hammer and other disruption cards of their own in their Eternatus VMAX decks. For example, Matias and Andres included multiple copies of Power Plant to prevent their opponents from drawing cards using Dedenne-GX's Dedechange Ability. Federico also targeted the opponent's Abilities using Galarian Weezing. David included an Umbreon & Darkrai-GX in his deck—its Dark Moon GX attack prevents the opponent from playing any Trainer cards during their next turn. This gives Eternatus VMAX enough time to accrue the Energy it needs to attack, especially when Weavile-GX is in the mix.

Many Trainers (including the Power Rankings team) had Arceus & Dialga & Palkia-GX/Zacian V pinned as one of the favorites to roll through the Region Qualifiers. The deck is designed to win the game as quickly as possible by using Arceus & Dialga & Palkia-GX's Altered Creation-GX attack followed by consecutive Brave Blade attacks. Top Trainers David Innocente and Luca Clavadetscher added even more power to Zacian V by including Rusted Sword from the Sword & Shield—Shining Fates expansion to their decks. Despite all the hype, they were the only two Trainers who progressed to the Global Finals with Arceus & Dialga & Palkia-GX/Zacian V. One explanation for this is the deck has become the victim of its own success—every Trainer came to battle with a plan to defeat it.

One quarter of the Trainers progressing to the Global Finals chose to battle using Pikachu & Zekrom-GX. This should come as no surprise to Pokémon TCG fans: The Pikachu & Zekrom-GX deck has been played to considerable success since it debuted at the 2019 Oceania International Championships, including 1st and 2nd place at the Players Cup II. By combining powerful Lightning-type Pokémon like Pikachu & Zekrom-GX, Boltund V, and Raichu & Alolan Raichu-GX, with support Pokémon like Dedenne-GX and Tapu Koko Prism Star, the deck can quickly apply pressure to and overwhelm the opponent.

Joaquin Reyes, Mike Fouchet, Jeremy Lim, and Mitch Knuckey found success in the Region Qualifiers with this strategy. Interestingly, all four Trainers also chose to include one or two copies of Mewtwo & Mew-GX in their decks. Using its Perfection Ability, Mewtwo & Mew-GX can copy the attacks of your Pokémon-GX on the Bench or in the discard pile. It also has a huge amount of HP—more than any other Pokémon in a typical Pikachu & Zekrom-GX deck. This provides Trainers with greater attacking options each turn and makes it more difficult for the opponent to take Prize cards. 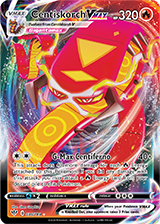 Fire-type Pokémon are renowned for doing loads of damage, and there are plenty of Trainer cards in the Standard format that enable them to demonstrate just that. It is no surprise, then, that one in every four Trainers brought a deck featuring Fire-type Pokémon to battle.

Azul C. Garcia Griego decided that Blacephalon was the best of the decks featuring Fire-type Pokémon, while Giovanni Peragalli Shand favoured a deck centred around Centiskorch VMAX. Jack Underwood took a creative approach to deck building by using Welder, Giant Hearth, and Volcanion to attach Fire Energy to a variety of powerful Pokémon, including Reshiram & Charizard-GX, Dubwool V, and Cramorant V. To guarantee access to Welder every turn, Jack used several Abilities: Jirachi's Stellar Wish, Oricorio-GX's Dance of Tribute, and a combination of Mewtwo's Mind Report with Oranguru's Primate Wisdom. The deck even included a Phione, which meant Jack could play Welder and push out the opponent's Active Pokémon on the same turn!

The decks discussed so far are all designed to do loads of damage to the opponent's Pokémon…but there are plenty of other strategies that can lead to success in battle. For example, the Lucario & Melmetal-GX deck uses the Full Metal Wall GX attack, Zamazenta V's Dauntless Shield Ability, the Metal Goggles Item card, and Coating Metal Energy all to reduce or nullify the damage done by the opponent's Pokémon. It's pretty tough for the opponent to win if they cannot take a Prize card. Lucas Matheus found great success with this strategy, progressing to the Players Cup III Global Finals. 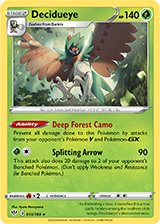 Another player who successfully nullified the damage done by the opponent's Pokémon was Kevin Krueger. This Top Trainer focussed on Decidueye's Deep Forest Camo Ability, which prevents all damage done by the opponent's Pokémon V and Pokémon-GX. When many of the popular decks rely on Pokémon V and Pokémon-GX to take Prize cards, Decidueye makes a compelling case for selection. The deck also employs strategies to deal with single-Prize Pokémon, such as using Aromatic Grass Energy to reduce the damage done by Volcanion, and Tapu Fini to Knock Out Blacephalon.

The most unexpected deck to progress to the Players Cup III Global Finals was piloted by Tord Reklev. The Excadrill control deck is designed to win by creating a situation in which the opponent is unable to draw a card at the start of their turn. The first step is to discard cards in the opponent's hand by using Reset Stamp, followed by Jessie & James and Weezing. Then, the plan is to manipulate the top card of their deck using Chip-Chip Ice Axe. It can be difficult to find all the pieces required for this combination, so the deck utilizes Jirachi's Stellar Wish, Zacian V's Intrepid Sword, and Cinccino's Make Do to draw cards. It also features Trainer cards that disrupt the opponent, such as Team Yell Grunt, Wondrous Labyrinth, and Galar Mine. Excadrill's Rototiller attack enables Trainers to retrieve cards from the discard pile…and execute this complex strategy over and over again!

Tord and David Daritan are the only two Trainers to have qualified for the Global Finals in more than one Players Cup. Make sure you catch up on the broadcast of the Region Qualifiers to watch Tord and the Excadrill Control deck in action!


What to Expect at the Pokémon Players Cup III: Pokémon TCG Global Finals 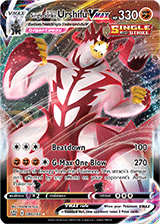 More exciting battles and interesting decks await in the Global Finals. For the first time at a Players Cup, Trainers will have the opportunity to compete using cards from the Sword & Shield—Battle Styles expansion. Excitement surrounds the new Single Strike and Rapid Strike mechanic. In particular, Top Trainers have their eyes on the powerful new Single Strike Urshifu VMAX. As a Fighting type, it has an advantage against Pikachu & Zekrom-GX and Eternatus VMAX. It also comes prepared with an attack, G-Max One Blow, that ignores the effect of Decidueye's Deep Forest Camo Ability and Zamazenta's Dauntless Shield Ability. This Pokémon can even increase its damage output through Single Strike Energy and Strong Energy, and it can be quickly powered up by Houndoom's Single Strike Roar Ability. You'd better believe that Single Strike Urshifu VMAX will have an impact at the Players Cup III Global Finals.

Pokémon TCG fans may also see Mewtwo & Mew-GX return to the battlefield. At a recent Taiwan Regional tournament that featured almost 2000 players, three different Mewtwo & Mew-GX decks earned a place in the Top 16. Given that Single Strike Urshifu VMAX has a Psychic-type Weakness, Mewtwo & Mew-GX is in a powerful position. One of these decks included the new Victini VMAX, which can Knock Out most of the popular Pokémon V using its Max Victory attack.

Inteleon VMAX is another deck that made a return to the limelight. This Pokémon was made famous by Tord Reklev when he paired it with Frosmoth and placed in the Top 4 at the Players Cup I Global Finals. The current iteration of the deck utilises Kricketune V's Exciting Stage Ability to draw extra cards each turn; this is particularly important after using Rose to accelerate Energy cards. If the threat of Single Strike Urshifu VMAX deters Trainers from choosing Pikachu & Zekrom-GX for the Global Finals, there may be an Inteleon VMAX battling for the top spot!

Find out which decks the sixteen Top Trainers choose, and watch them battle during the Official Pokémon broadcast of the Pokémon Players Cup III Global Finals on April 23–25 at Twitch.tv/Pokemon and YouTube.com/Pokemon. 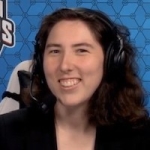