First of all, we thank all our loyal Magikarp Trainers for putting so much effort into training generations of plucky Magikarp with us!

Sadly, we regret to inform you that the Magikarp Jump app will be retired from the Amazon Appstore as of 2:59 a.m. UTC on January 31, 2023.

After this date and time, it will no longer be possible to install the app from the Amazon Appstore. If you installed the app prior to this date, you'll find that some features within it will no longer work beginning January 31, 2023.

The sale of paid items, like Diamonds and Exchange Tickets, has also ended. However, you will still be able to use any Diamonds or Exchange Tickets you purchased before this date and time, even after the game's removal from the Amazon Appstore.

We're so grateful to you all for playing and loving our app for so long.

NOTE: The above dates and times are subject to change without notice.

After you've trained your Magikarp to its fullest potential and it loses a match, it will retire. When that happens, you'll start over with a new generation of Magikarp. But not all progress is lost—your new Pokémon will start off a little bit stronger than your last one. Keep training every Magikarp until you can make it to the top of the in-game tournament ladder! Plus, the Coins you've earned along the way can boost the value of the food and training you lavish on your Magikarp.

While you're raising your Magikarp, you can befriend Pokémon that want to help you. For example, some Pokémon will give you more Coins to help boost your training events or throw more food into Magikarp's pond to keep it nourished. Also look for ways to decorate your Magikarp pond to enhance the effects of training and events.

When you do well in jumping tournaments, or if you're proud of the look of your Magikarp pond, you can get commemorative photos of your achievement. You can share these photos online and with friends to show the world how well you've trained your Magikarp.

Pokémon: Magikarp Jump also features in-app purchasing, where you can spend real money to buy Diamonds. In the Diamond Shop, you can use Diamonds to gain various items that help you boost your Magikarp, get Coins, and obtain Decorations to customize your Magikarp's habitat.

Look for Pokémon: Magikarp Jump for iPhone and iPad in the App Store, for Android devices in Google Play, and for Kindle Fire on the Amazon Appstore. You can play in English, French, Italian, German, Spanish, Japanese, Korean, and simplified and traditional Chinese. 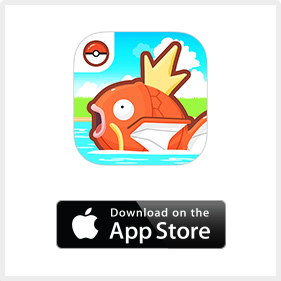